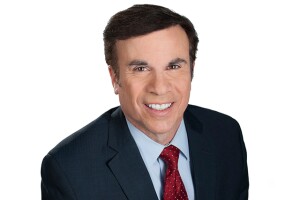 When did you start working here?

Where else have you worked?

WNCS "The Point" FM, Montpelier Vermont. My first on air job was in radio. And I still listen to them.

Where did you go to college?

University of Vermont. And no, I did not major in Communications or TV, in case you were wondering. Shakespeare, actually.

What are you most proud of when it comes to your work?

I am most proud of (and thankful for) my ability to use my position here to help people who have been taken advantage of unfairly.

Some of the most gratifying moments of my day are when I can do little things that help people, that never even get on the air.

For instance, helping a family get their water or electric turned back on, or explaining to people how to fight a car repair rip-off or other injustice.

When I see a business or website taking advantage of people, I'm not afraid to say "doesn't that stink?" and let folks know what I think of them separating hard working people from their money.

What are you most proud of in your own life?

Being married, and being a Dad.

What do you love about your daily job?

I love talking to community groups about scams and rip-offs: there is a never ending supply of new scams looking to take our money.

And I love hearing the concerns of real people.

What are your favorite hangouts/places?

Coffee shops. I am CRAZY about coffee, as anyone who knows me probably knows. Independent coffee shops, folk-singy coffee shops, Starbucks, even Dunkin Donuts. And gas stations if I am in a hurry.

I'm still mad they closed the Caribou Coffee near me!

I am one of the few people in the world who like both country music, and broadway musicals. Find me one other person whose dream day would be seeing a matinee of Les Miz, followed by a Jason Aldean concert.

And I really love 70's and 80's hits, especially reruns of Casey Casem's "American Top 40" on Sunday mornings, where they re-air his old shows from the late 70's. Reminds me of being a kid again.

Apps you can't live without?

WAZE, a great app for road trips, which I love taking. Warns you of traffic jams ahead.

BuzzFeed: Great gossip, offbeat news, and occasionally a story for my consumer segment.

RedLaser: For comparing prices in stores, as you shop.

TripAdvisor App: I love reading reviews of hotels on TripAdvisor, even if lots of them are fake.

And Weather apps: I am a weather geek, so I have our Storm Shield app, our weather app, and several other competing weather apps I'm not supposed to mention.

How to find me:

Have a problem? Send me an email, at jmatarese@wcpo.com, or a Facebook message at Facebook.com/JohnMatareseMoney

While I can't possibly help everyone personally and resolve your problem, I can at least give you suggestions, which is what I love to do!

And if you are traveling, check out my reports on the following stations: