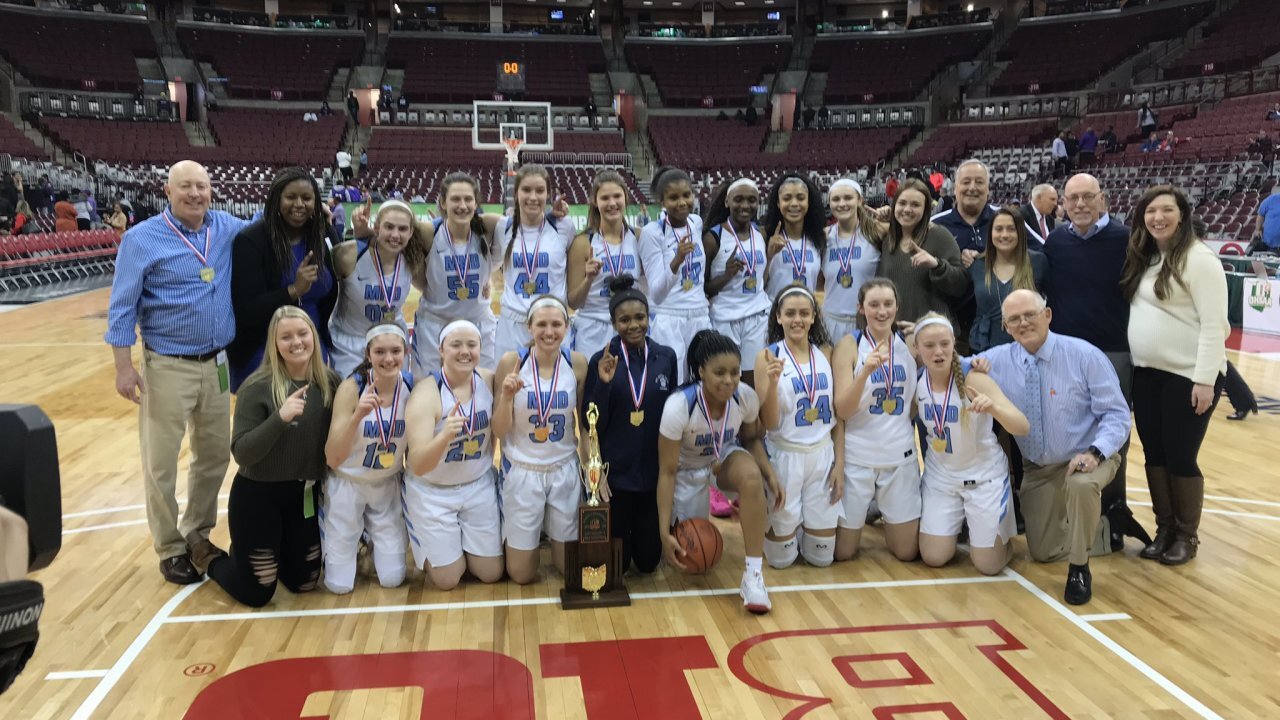 Mike Dyer/WCPO
The Mount Notre Dame basketball team won the Division I state championship in March at the Schottenstein Center. The Cougars are considered the preseason No. 1 this season.

CINCINNATI — The Ohio high school girls basketball season is right around the corner.

The Cincinnati area has had a Division I representative in the state Final Four for six consecutive seasons and certainly has another excellent opportunity this winter to make it to Columbus.

Here are nine storylines to watch as the season begins:

MND is the preseason No. 1

Mount Notre Dame, the reigning Division I state champion, is loaded with talent once again this season.

“All our kids had great summers,” MND coach Dr. Scott Rogers said. “It’s been fun to be around and watch them play.”

The Cougars (27-2 in 2018-19) return the likes of sophomore guards KK Bransford and Laila Phelia along with senior point guard Makira Cook (Dayton commit).

“I think there is no better backcourt in the state than those three,” Ohio Girls’ Basketball Report Associate Director Bryce McKey said.

Bransford, who is being recruited by several major college programs, has matured on the court after playing with the USA Basketball Under-16 national team and winning gold this past summer. She played point guard and continues to develop her perimeter game.

Rogers likes the camaraderie and the competitiveness of open gyms this fall.

MND opens the season against national power New Hope Academy (Landover Hills, Md.) Nov. 23 in the Journey to the Tourney at Lakota West.

Talawanda was 2-21 last season. Huismann won 696 games at Mother of Mercy High School prior to accepting the Talawanda position in May 2018.

The 2020 state tournament will return to the storied arena in Columbus for the first time since 2005. The state tournament had been at the Schottenstein Center nearly every year since 2000. This season's tournament at St. John Arena (March 12-14) coincides with Ohio State University’s spring break.

MND played at St. John Arena twice before in the state tournament including being the Division I state runner-up in 2005 and a Division II state semifinalist in 1989.

“There is so much history in that place,” MND coach Dr. Scott Rogers said. “It has that old-school gym feel. I am sure every coach would want to play there.”

The sites for 2021 and 2022 state girls tournaments have yet to be determined.

Loveland senior forward Jillian Hayes and Roger Bacon junior power forward Clarissa Craig will carry the spotlight locally this winter as both have verbally committed to play at the University of Cincinnati.

“Clarissa is healthy this year,” Roger Bacon coach Joe Finnegan said. “Clarissa hurt her knee in December and played through it as best she could until needing a procedure that took her out of the postseason. Clarissa is faster, stronger and has worked very hard on her skills. I feel Clarissa is one of the best players in Ohio in her class.”

Hayes, the sister of New Orleans Pelicans rookie center Jaxson Hayes, can play any position on the floor and be able to guard any position for Loveland.

“Jill has really dedicated herself to becoming a complete basketball player for her senior season,” Loveland coach Darnell Parker said. “She has worked hard on her all-around game and increased her range on the perimeter. One thing that opponents will immediately recognize with Jill this season is her quickness and explosiveness.”

Walnut Hills has plenty of depth from a team that was a Division I regional semifinalist last season, according to coach Adam Lazar.

“Walnut Hills is on pace for another fantastic season,” Loveland coach Darnell Parker said. “I can’t say enough about the job that Adam is doing over there with his kids.”

Lazar said Walnut Hills has been to back-to-back regional appearances for a reason and believes his players feel disrespected.

“We lost Kennedi Myles (Illinois) but we still believe we are one of the top teams in the state,” Lazar said.

Mercy McAuley (20-5) was a Division I regional semifinalist last season and the team is eager to embrace a tougher regular-season schedule this winter. Mercy McAuley opens in the Journey to the Tourney then plays in Canton over Christmas break before a trip to Berlin for the Classic in the Country in mid-January.

“What I like most about this team is how hard they compete and how tough they practice,” Mercy McAuley coach Nick Baltimore said. “These kids are great to each other off the floor but they realize to get where they want to be then they have to push each other as hard as they can in practice.”

The battle for the GMC

The ultra-competitive Greater Miami Conference is loaded with talent once again, especially with the likes of Princeton, Fairfield, Lakota West and Mason.

“The GMC will be very competitive this year,” Fairfield coach David Loper said. “I believe there will be parity in the GMC this year. Watch out for Princeton, Sycamore and Lakota East. Lakota West and Mason as always will be very good.”

“I like that we have a good mix of veteran players with some young talent,” Princeton coach Jill Phillips said. “I like that this is the group I started with as freshmen when I came back to Princeton.”

“So far, this fall, our leadership and team chemistry has been great,” Matula said. “As we get closer to the season, we will need our seasoned upper class players to bring in our younger players and make them understand what Mason basketball is about.”

"Our players genuinely play for each other and our team chemistry is the best since I have been the head coach," Sycamore coach Derek Christerson said. "Our depth will be solid as well."

Purcell Marian narrowly lost to Waynesville in the Division III regional final last season and Purcell coach Jamar Mosley is optimistic about the group that returns this season.

“With pretty much a brand new team they all are coming together and getting along with one another,” Mosley said.

“We will have potentially nine juniors on the team this year and they all have displayed leadership throughout this fall.”

Mount Notre Dame sophomore guard KK Bransford is ranked the nation’s No. 1 guard and the No. 9 player overall in the 2022 class, according to the ESPN HoopGurlz Terrific 25 rankings.

Bransford, who is near 6 feet tall, was part of the USA Basketball Under-16 team that won the gold medal in the FIBA Americas U16 Championship in Chile this summer.

She has scholarship offers or interest from several major college programs, according to MND coach Dr. Scott Rogers. UConn has shown interest.