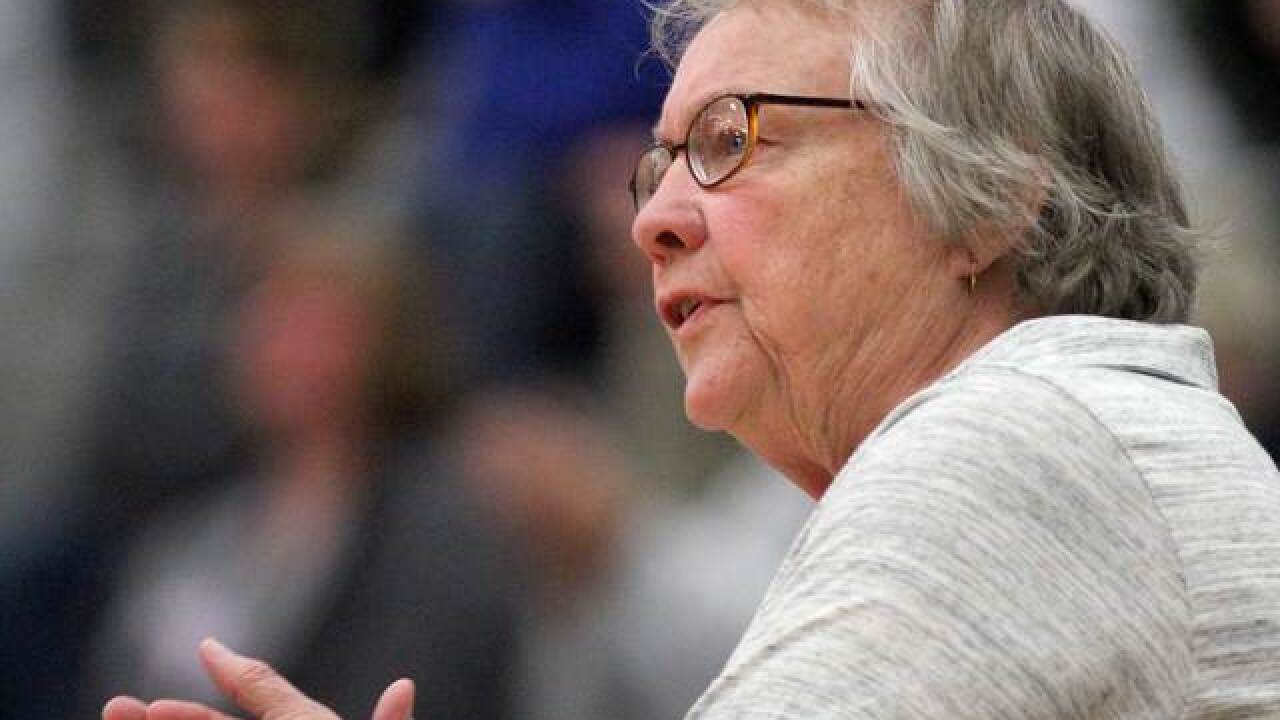 Copyright 2018 Scripps Media, Inc. All rights reserved. This material may not be published, broadcast, rewritten, or redistributed.
Tony Tribble
<p>Former Mercy basketball coach Mary Jo Huismann has accepted the head coaching position at Talawanda. Huismann coached Mercy since the 1972-73 season and is four wins away from 700 for her career. (Photo by Tony Tribble)</p>

The Talawanda Board of Education approved the hiring of the Ohio Basketball Hall-of-Famer and former longtime Mother of Mercy High School coach at its meeting.

"She is not only a proven winner but she also has knowledge of building a program and also has great leadership," Talawanda Athletic Director Wes Cole told WCPO. "Those qualities stood out with our interview committee. We were looking for someone to build our entire program from the youth levels to high school."

Huismann is just four wins from becoming the third Ohio high school girls' basketball coach in history to win 700 career games, according to the Ohio High School Athletic Association. Still, she said her motivation isn't about the pending milestone.

Huismann -- inducted into the Greater Cincinnati Basketball Hall of Fame, the Buddy LaRosa High School Sports Hall of Fame and Mother of Mercy Hall of Fame -- received the Lifetime Achievement Award from the Women's Sports Foundation among her numerous honors.

She has won 18 league titles and 15 district titles.

A 1965 Mercy graduate, Huismann was the school's athletic director for 39 years before she stepped down from that position in 2011.

Mercy and McAuley high schools will close their doors at the end of the school year and merge to form a new school, Mercy McAuley High School, later this year.

Huismann applied for the Mercy McAuley coaching position and considered her options after the process was completed. She looked for the right fit and said Talawanda is a place where she wants to invest her time immediately.

"The people seem very, very nice," Huismann said of Talawanda. "They made feel wanted as a coach."

Huismann, who lives in West Harrison, Ind., said Talawanda is the same distance from her home as Mercy has been all these years.

In addition to coaching more than 1,000 high school games over the course of her career, Huismann  helped establish the Amateur Athletic Union (AAU) girls' basketball program in Cincinnati with former Wyoming coach Deb Gentile in the 1980s and 1990s.

In 1996, Huismann was in Sports Illustrated's "Faces in the Crowd" to commemorate her 400th win. Mercy was state runner-up three times (1980, 1989 and 1990). She has been named a national and state coach of the year along with several league and city honors.

She coached the University of Cincinnati for two seasons starting in 1969 before she became the Capital University head coach in 1971-72. She returned to UC for two additional seasons through 1974.

Mercy was 14-9 overall and 5-5 in the Girls Greater Catholic League in its final season of basketball this past winter.