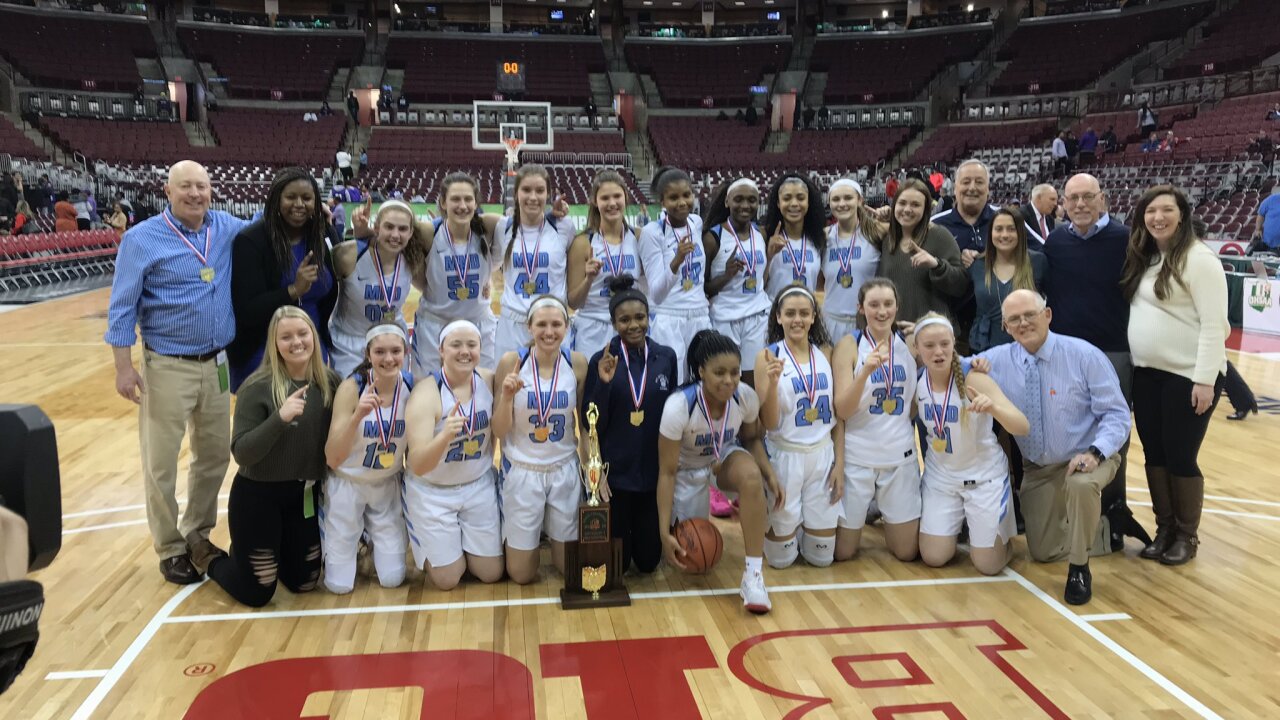 The Cougars tied the state record for the most girls’ basketball titles with some flare and plenty of emphasis on both ends of the floor in the fourth quarter.

MND defeated Pickerington Central 52-31 in the Division I state final in front of 3,456 at the Schottenstein Center.

The Cougars (27-2) outscored the state’s top-ranked team 20-2 in the fourth quarter after MND led by just three (32-29) at the end of the third quarter. It was setting up to be a memorable fourth quarter, but not many expected the Cougars to hold the Tigers to two points the rest of the way.

MND coach Dr. Scott Rogers, who won his fourth state title as the Cougars' head coach, said his team was mentally prepared to close out the game.

“I am proud of them regardless of what happened tonight,” said Rogers. “They had the resolve all year to get here. I didn’t know what was going to happen in this game. They are the ones with the confidence. It’s their program.

"They play with so much heart. They care so much about each other. It’s what high school basketball is all about. I am just really proud to be a part of it in all honesty.”

MND, ranked No. 8 nationally by the MaxPreps Xcellent 25, won its seventh title in the Cougars’ ninth state tournament appearance.

MND was the Division I state runner-up in 2005 and a Division II state semifinalist in 1989.

MND led 19-16 at halftime after trailing by four at the end of the first quarter.

The game went back and forth late in the third quarter. Hoefling’s basket 15 seconds into the fourth extended the Cougars’ lead to 34-29.

Later, senior guard Gabbie Marshall made back-to-back distant 3-pointers to give the Cougars a 42-29 lead.

“I knew one of them would fall eventually, so I just kept shooting it and it went in,” Marshall said.

Hoefling could sense the momentum in the Cougars’ favor as it avoided any Tigers’ traps.

“Once Gabbie started hitting the threes, I was like, ‘We are rolling,’” Hoefling said.

Junior guard Makira Cook followed that up with another 3-pointer to give MND a 45-29 lead with 3:40 left.

"This (state title) means everything to me," Cook said.

Pickerington Central (28-2), the 2018 Division I state champion and ranked No. 14 nationally by MaxPreps, would never recover from the barrage of 3-pointers in the fourth quarter.

MND will likely have a school celebration Tuesday afternoon, according to Athletic Director Mark Schenkel.

Marshall won’t soon forget the impact that MND basketball has had on her life.

"This is the best team I’ve ever been on,” she said. “We are just so talented. Our bond is so tight. I will miss the friendships and seeing them every day.”