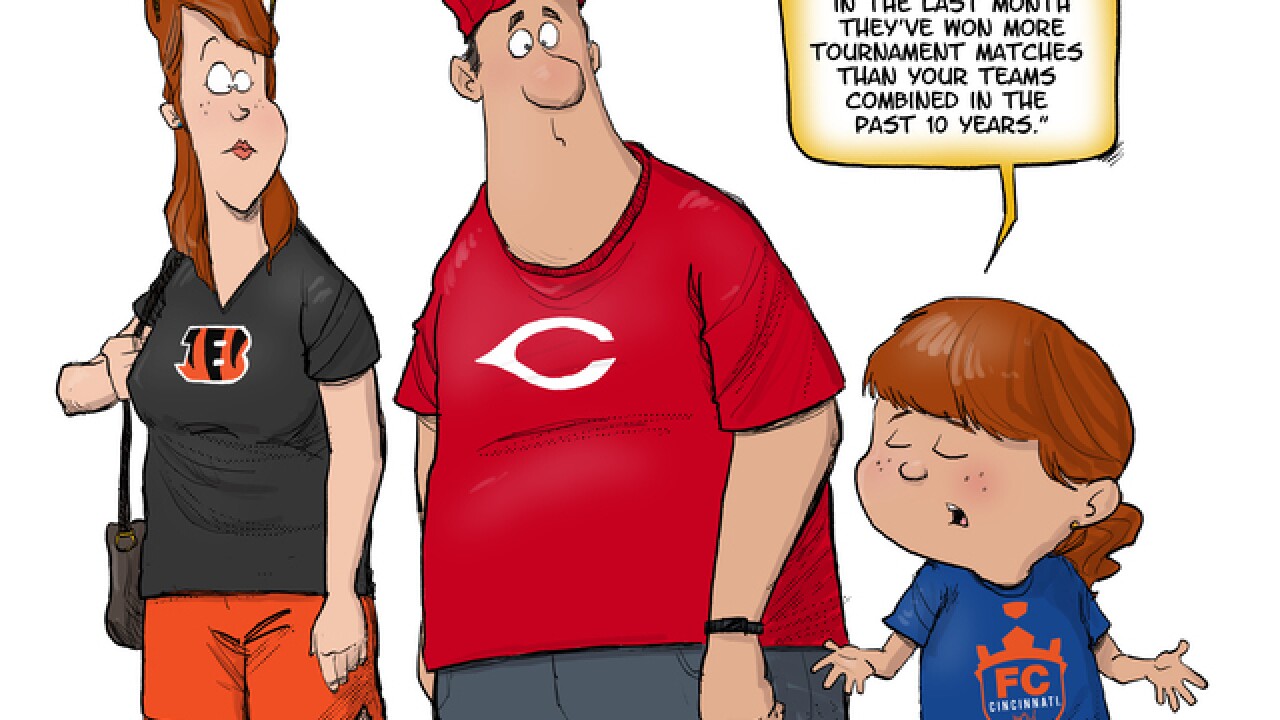 Copyright 2017 Scripps Media, Inc. All rights reserved. This material may not be published, broadcast, rewritten, or redistributed.
Kevin Necessary | WCPO

CINCINNATI -- Let's play the game all of Cincinnati loves to play. Which one of our teams will win a world championship first: The Reds, Bengals or FC Cincinnati?

You think it's going to be the Reds? After the team’s death-defying decision to hold on to Matt Harvey or their equally inexplicable decision to let their All-Star short stop, Zack Cozart, waltz into free agency without compensation last season? Keep on dreaming that impossible dream, Quixote.

How about FC Cincinnati, which is laying to waste the rest of the United Soccer League this season? Well, remember, FCC operates in the USL, which is basically the same level of soccer as the Cyclones play in hockey.

RELATED:  New player signings have created a crowded roster for FC Cincy -- and less playing time for some

First you find 'em, then you pay 'em, and then you hope. The last MLS team to win a championship in its first season, by the way, was the Chicago Fire. That was back in 1998.

The best part about being an expansion team is that you're not beholden to contracts that aren't working -- at least for the first season. In baseball, where all contracts signed are guaranteed, players and teams battle bad terms all the time.

That's why the Reds almost always come up short when you try to pick who's next for a come-up. Rebuilding a team is tough. Rebuilding a baseball team is the toughest of the five major sports.

In football, players other than quarterback can get to the NFL with with only one or two exceptional skills. This doesn't make them inferior athletes to baseball players. It's just a difference in the two games.

So if you want to play the game of "Who's Next To Bring A Championship To Cincinnati," my money is on the Bengals. The NFL is the easiest of the professional leagues to get a better team quicker.

Look at the Reds. They've been bad since the 2013 season. Who on this present-day roster even approaches a five-tool player? Their best,  Joey Votto , can hit, but his power numbers are trailing off. He can field (won a Gold Glove), but his base-running skills aren't that great. However, he's so exceptional at hitting that it makes up for a lot of the other categories. Go through the rest of the "everyday eight," and you'll find tools lacking. Baseball is a complex game.

Football is not. Nor is soccer. Both sports have set strategies that change from play to play throughout the game. In baseball, they change from pitch to pitch.

The complexities of the NBA and its salary-cap structure aside (and, besides, we haven't had an NBA franchise in Cincinnati in over 45 years), if you know what you're doing, you can turn an NFL franchise around in one season.

Look at what the Jacksonville Jaguars did after the 2016 season. In 2016, the Jags went 3-13, fired their head coach with a week to go in the season and missed the playoffs for the ninth straight season. Then, the owner got smart.

Shad Kahn hired former Jaguars head coach Tom Coughlin to run the franchise and promptly got out of his way. He gave Coughlin money to conduct business, too. The Jaguars went from a bargain-basement joke to a Super Bowl contender overnight.

The Jags signed nine free agents before Coughlin and his crew went out to spend some real money. They signed eight unrestricted free agents in the first three days of free agency. Defensive lineman Calais Campbell was one of them. So was safety Barry Church and cornerback A.J. Bouye.

The Jaguars were all in, and although they didn't make it to the Super Bowl, they finished 10-6 and won a couple of playoff games. Would you take that, straw-man Bengal fan?

How about the team that won it all in 2017? The Eagles were 7-9 in 2016 (actually a half game worse than the Bengals in that season). Both the coach and the general manager were entering their second year. The owner, Jeffrey Lurie, gave them some money and told them to get busy.

Straight out of the gate, the Eagles signed three impact players on Day 1 of free agency: Wide receiver Torrey Smith, wide receiver Alshon Jeffery and guard Chance Warmack. Four days after that, they signed Super Bowl hero quarterback Nick Foles. Not long after that, in came running back LeGarrette Blount.

And the Eagles didn't stop there. They pulled off three trades, two that had an immediate impact. Before the draft, they got Cleveland's first-round pick and took quarterback Carson Wentz. But they got back into the first round by trading Sam Bradford to the Vikings. And later, they wound up getting a key piece for their defensive line when they sent a third-round pick to the Ravens for Timmy Jernigan.

You can rebuild an NFL team, overnight, if you know what you're doing. Letting AJ McCarron walk away, without compensation to your team, isn't the way to do it.

Football lends itself to instant rebuilds because most of the money a team pays to a free agent, or re-upping with a current player, is up front. It's called bonus money. To earn his yearly salary, a player has to first make the roster that year. When you sign a free agent or extend a current player in baseball, every dollar is guaranteed.

The Bengals seem to be finding religion when it comes to these things. They dumped veteran George Iloka last week , unthinkable up until now. In the past, the Bengals carried veterans long past their productive times.

Mike Brown has been described as both sentimental and ruthless, depending on whom you talk to. Maybe the sentimentality is now on hiatus.

Bob Castellini has been described the same way, but he's been OD'ing on the sentimentality. He refused to okay trade deals, reportedly, in the summer of 2015 before the All-Star Game was played in Cincinnati, presumably because he didn't want the baseball world chirping about how bad his team was.

The ASG left town and the Reds found themselves trying to hold a fire sale in the final hour the store was open. Walt Jocketty did well to get what he did for both Mike Leake and Johnny Cueto, and he didn't do all that well.

Cozart should have been traded the winter before his final year here. So should Aroldis Chapman. How's that Chapman deal looking now? Rookie Davis was just shipped to Triple-A after being hurt all three years. The rest of the players the Reds got in that trade are in witness protection.

The final way you get better in baseball is by signing free agents. There is nothing "free" in that game. It's tens, if not hundreds, of millions of dollars. And the last big-dollar free agent the Reds signed was ... ?

Unlike their counterparts in basketball, football and soccer, baseball players don't usually arrive rom the draft ready to play at the Major League level. While Joe Mixon can be drafted in May and on the field in September, Nick Senzel and Hunter Greene need years of seasoning. While Mixon needs only to run and make cuts, Senzel has to learn to put a round bat on a round ball that is thrown progressively better at each stop of the road to Major League Baseball.

Pitchers throw by doing things to their elbows and arms that God never intended. Even if you have a plan, even if you know what you're doing, building a baseball team is fraught with so many more invariables than any other sport.

So, if forced to guess which of our now three major league teams will win Cincinnati its next world championship, my money is on the Bengals. It's not because I think they know what they're doing or that the Reds don't. It's not because I think FC Cincinnati's front office or technical staff is lacking. It's not. It's just that turnarounds in the NFL are simply easier to pull off.

If you know what you're doing.

Now then, some thoughts that have been cascading around in my head like a wave that surfers in California would kill for:

Had he lived, Michael Jackson would have celebrated his 60th birthday Thursday. The King of Pop at 60. Now that would've been Off The Wall.

Title song from Jackson's 19th studio album, which hit the streets about 39 years ago. He didn't write this song. In fact, Jackson wrote only three songs on this album. This one was written by longtime collaborator Rod Temperton.

The album had an all-star cast of musicians, but one of the real stars is the guy laying down the bass riff: Louis Johnson, of the Brothers Johnson. The album is now on its way to nine times platinum just in the USA alone. Almost 9 million copies have been either sold or downloaded.