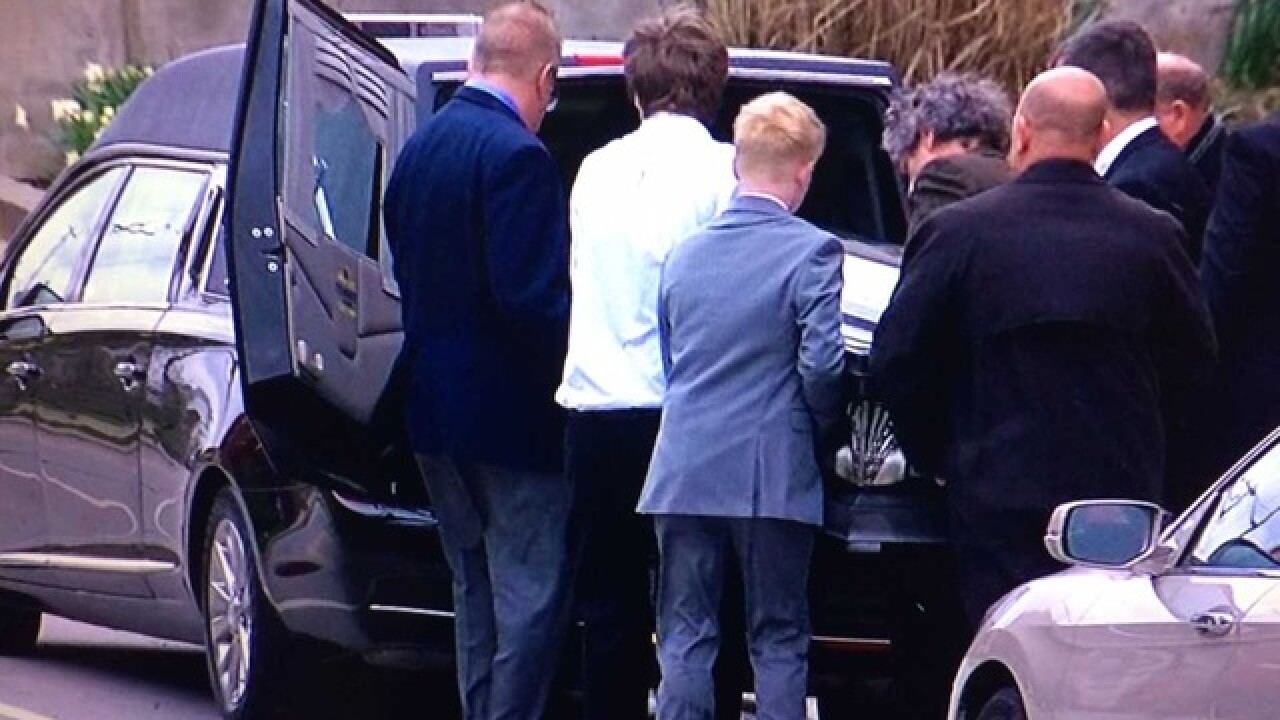 The teen died trapped inside his van at Seven Hills School last Tuesday, even after he pleaded with 911 operators to send help. Two Cincinnati police officers and a Hamilton County sheriff's deputy who searched near the school never found him. A Cincinnati City Council committee has a special meeting Tuesday afternoon to look into what happened.

After Plush's death, the Cincinnati Police Department released a computer-aided dispatch report, Plush's calls and some dispatch traffic. It later released an internal review of the incident after it was leaked to multiple news outlets.

But the department has yet to explain exactly where its officers looked and what they did during their search for Plush. Nearly a week after the teen suffocated, numerous questions remain about what went wrong that day.

Stephane MaGee took the first 911 call from Plush. She couldn't communicate back and forth with him, because he said he could not hear her.

MaGee indicated the caller was a female trapped in a van at the Seven Hills parking lot in "unknown trouble."

Using latitude/longitude coordinates, she found Plush may be across the street from the school. She noted that location may be a thrift store parking lot in the dispatch report.

Officers were dispatched to 5471 Red Bank Road, which is the parking lot across from the school where Plush was suffocating inside his Honda Odyssey. MaGee noted she used "Phase II" to find the location; "Phase II" is shorthand for a requirement, from the Federal Communications Commission, that wireless providers have to give 911 centers the latitude/longitude coordinates of cellphone calls.

The latitude/longitude coordinates MaGee obtained were within feet of where Plush would be found dead later that night.

Even though MaGee had almost the exact location of where Plush was found, a supervisor later wrote she should've used the school's name -- which would've sent officers to a less-exact location, at 5400 Red Bank.

It's unclear if they ever came back on the radio to ask for clarification about the caller or vehicle.

The officers noted they tried calling Plush back but didn't get an answer. Less than 11 minutes after arriving, they marked the assignment complete and were ready for a different assignment.

Later that night, when Plush was found dead, another call went out for police to respond to Seven Hills School. Officers didn't yet know Plush was dead.

Brazile and Osborn's unit, 2232, came on the radio to say they'd been there earlier in the day and found nothing.

"I think somebody's playing pranks. It was something about they were locked in a vehicle across from the school, we never found anything. But we'll respond and see what else we can find," one of them said in the radio transmission that night.

That's what we know about the two Cincinnati police officers' actions. WCPO has requested numerous records, which have not yet been provided.

Chief Eliot Isaac has not gone into detail about what the officers did at the school that afternoon. In a news conference Thursday, he never mentioned them by name.

Isaac has not said how they searched five school parking lots in 11 minutes and determined there was no trouble, or if they ever went through the parking lot where Plush was trapped.

A reporter asked Isaac if the officers ever saw Plush's van. He replied he thought a sheriff's deputy had seen it, though the sheriff's office says that's untrue.

"As you can see, there were multiple lots that were checked," Isaac said. "You can see one, two, three, four, five lots that are associated in proximity to the school. But those are questions we're going to ask, as well. We want to be able to get a comprehensive view of what actually took place."

Lt. Steve Saunders told WCPO a surveillance camera at the school-owned thrift store captured the sheriff's deputy looking in the thrift store's parking lot; we don't yet know if it recorded the officers.

We don't know if there's body camera or dashboard camera footage of their search.

We don't know if the latitude/longitude coordinates from Plush's first call ever got to them.

We asked if the patrol car's GPS could show where, exactly, Osborn and Brazile had gone. We were told CPD patrol cars don't have GPS tracking. Other city vehicles do.

Amber Smith took Plush's second 911 call. It came in at 3:35 p.m., while Brazile and Osborn were still at the scene.

In the second call, Plush gave more detail about his vehicle -- its make, model and color -- than he gave in the first call.

But Smith didn't respond to anything he was saying, and she said she couldn't hear him. If true, that's a problem the 911 center has seen before: A city report, released last year, says incoming and outgoing calls couldn't be heard for roughly three and a half hours in July 2017.

According to an internal review from a supervisor last week: "West Communications investigated; no trouble with the phone system during this call."

Still, at one point during the call, Smith sent a TTD, or telecommunications device for the deaf, message to him. That's something an operator might do if they believe the caller was hearing-impaired or unable to speak. And the review found she followed procedure in doing so.

If she truly couldn't hear Plush, that same review found Smith should've taken steps to determine if someone was on the line -- like asking him to tap the phone twice or press #2 on the phone, or asking only questions that required yes/no answers.

The latitude/longitude coordinates from Plush's second call were slightly different than his first, but still were within feet of his minivan. Smith later said her terminal froze up, so it's not clear if she had access to those coordinates.

She noticed there was a prior call from Plush's number and called him back, twice.

She didn't document the call, however.

According to the internal review: "Network connectivity connection problem was noted at the time of the call. This possibly is responsible for the incident not being entered."

RELATED: Tech errors like the ones in Kyle Plush case 'not uncommon'

Smith was placed on administrative leave last week but will return to work Wednesday. It's unknown if she'll face any disciplinary action, because the internal investigation is ongoing.

Deputy Doug Allen directs traffic at Seven Hills and knew Cincinnati police were there looking for someone.

He called MaGee at 3:44 p.m. and said he understood "a woman said she was stuck in a van at the Seven Hills School." He seemed confused at first, believing officers were looking for a "Phase II" parking lot; MaGee explained "Phase II" meant "when we try to get the location from the signal that we received from her phone."

"She was unable to hear me and just kept repeating, 'Help, help, I'm stuck. I'm in the Seven Hills parking lot," MaGee told Allen. "And I don't know if she was in the school, and I put in there that she could possibly be in the thrift store parking lot across the street."

Allen said he looked in a van but didn't see anyone inside.

Allen also said he thought it might be a prank from a woman whom he'd told to move her car around the same time.

"I betcha that was that, I'm trying to figure out who that woman was, I've never seen her before, I've directed traffic out here for 14 years," he said.

The Hamilton County Sheriff's Office later denied Allen ever found the van where Plush was trapped and killed during an initial search Tuesday afternoon.

"That did not happen," Schoonover said. "That deputy did join into the search to the best of his ability with limited information to no avail but he never came across the victim's vehicle."

He added that Allen looked in many vehicles.

Since March 2015, City Manager Harry Black has sent Mayor John Cranley and councilmembers 11 memos about problems with the city's 911 and emergency communications systems.

The WCPO I-Team uncovered problems in 2013 that included low staffing and inadequate training. In 2016, The I-Team reported on how technology problems were causing some calls to go unanswered. Earlier this year, an employee who was resigning from the 911 call center warned of managerial incompetence and dysfunction that she called "a threat to members of the public."

In early March, Chief Isaac alleged his second-in-command, Assistant Chief Dave Bailey, had "refused to respond and address operational issues allowing the (911 center) to deteriorate into crisis conditions." Isaac did not cite any specifics, and Bailey denied the allegation through his attorney. Still, that same week, Bailey was "forced out" after decades of service.

Capt. Jeff Butler, who formerly managed the 911 center, alleged in a federal lawsuit that City Manager Black misspent funds intended for 911 service. He claimed Black retaliated against him by removing him from that assignment.

Like Isaac, Butler has not provided specifics about what money he believes was misused and where it went instead. Black has denied the allegation.

Cranley, who wants Black to resign, singled out the emergency communications center as a service he felt was being mismanaged.

“I am deeply worried about the decision-making process at the 911 center because it's a life-and-death situation,” he told reporters last month.

Seven Hills School leaders have not said what happened during the Plush incident beyond a statement expressing condolences.

It's not clear if police contacted any Seven Hills staff Tuesday afternoon about a person trapped inside a van.

We asked for the thrift store surveillance footage. School representative Chris Hedges said she couldn't provide it to any media organization.

Listen at 29:20 as reporter Hillary Lake explains what happened to Kyle Plush, and what went wrong that led to his tragic death: