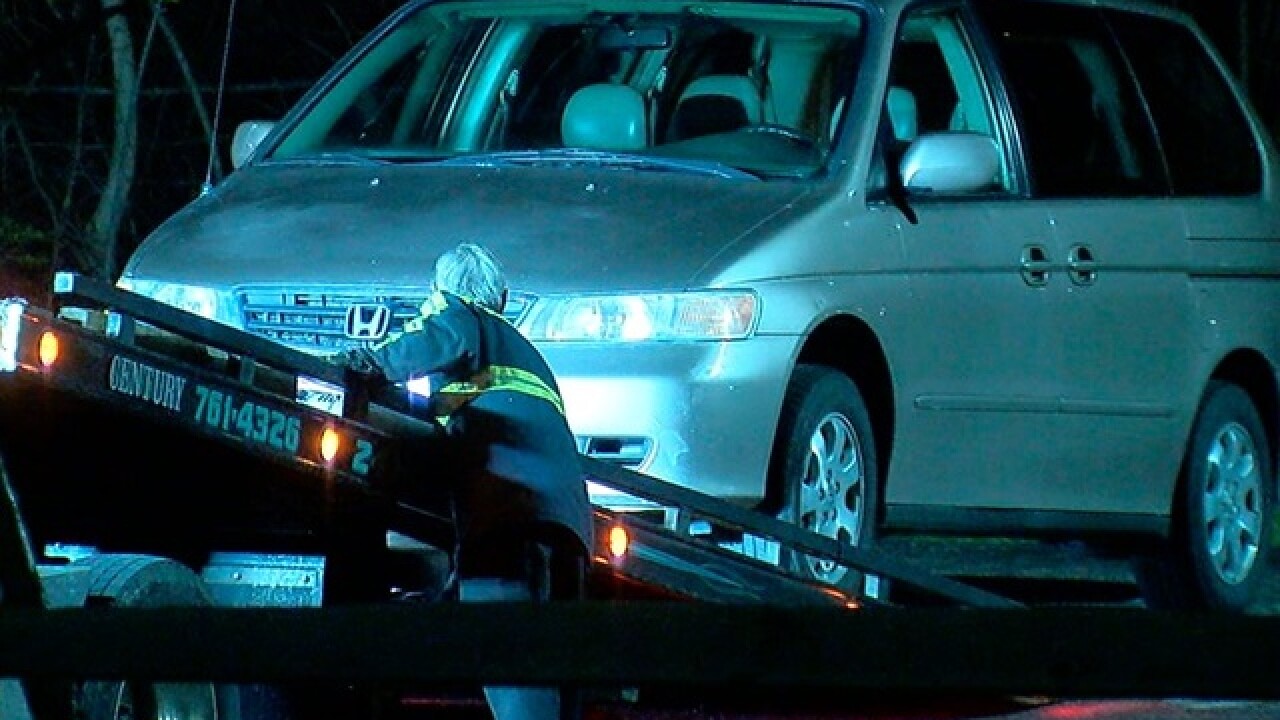 Copyright 2018 Scripps Media, Inc. All rights reserved. This material may not be published, broadcast, rewritten, or redistributed.
WCPO
<p>CINCINNATI. April 10, 2018. Kyle Plush's car is removed from a parking lot across the street from Seven Hills High School Hillsdale.</p>

CINCINNATI -- The Hamilton County Sheriff's Office is denying a deputy ever found the van where 16-year-old Kyle Plush was trapped and killed during an initial search Tuesday afternoon.

Chief Deputy Mark Schoonover appeared on WLW Friday morning to dispute media reports that a deputy dispatched to the Seven Hills School looked into Plush's van and moved on.

"That's simply not the case," Schoonover said. "He did look into some vehicles. He looked into a van, but he never looked into the victim's vehicle. He never located that."

Deputy Doug Allen had been working a traffic detail at the school, Schoonover said, and he had attempted to locate the van on foot.

Cincinnati police investigators who reviewed security camera footage also said the deputy looked into many vehicles, including a van, but never made it to the far part of the parking lot.

"He acted on the information he had at hand," Schoonover told WCPO. "He searched for the vehicle to the best of his ability. Under the circumstances, with limited information, he was unable to locate that particular vehicle. He went above and beyond even, because he took it upon himself to even call dispatch and try to find out more information."

Plush first called 911 at 3:16 p.m. Tuesday. He cried for help and repeatedly told the operator he could not hear what she was saying. Two Cincinnati Police officers were dispatched at 3:23 p.m. and reported not seeing anything at the school. The Hamilton County deputy rechecked the area at 3:48 p.m. to no avail.

With Seven Hills lying on the border between Cincinnati and Columbia Township, Hamilton County Sheriff's Office Spokesman David Daugherty told WLW that communication between city and county emergency dispatchers can be delayed since they can't dispatch each other's units.

RELATED: Teen crushed in van was 'vibrant and kind'

The time of day further complicated the deputy's search for Plush.

"We got this call right when school was out. There's so many cars in that parking lot that they have to hire a deputy to let cars out on Red Bank Road, so it wasn't that simple," Daughtery said. "I believe if we had a little bit clearer, more accurate information we could have found the vehicle."

Daughtery said their deputy had very little information from dispatchers about what type of van to search for.

"No color or anything. It was a van. A van could be a box van, a minivan, it's pretty vague," Daughtery said. "We're very sorry this happened. It's very sad, but I believe that the Cincinnati PD officers on the scene and our deputy did everything they could with the information they had."

The 911 operator who took a second call from Plush Tuesday afternoon has been placed on administrative leave because she didn't pass on the make, model or color of Plush's minivan to officers who responded, Police Chief Eliot Isaac said Thursday.

Plush’s death -- although tragic -- was an isolated incident, Schoonover said.

“I know no one probably wants to hear this … I haven’t heard of anything like this happening in my 37-year career in Hamilton County," Schoonover said.

Schoonover said he thinks there are “obviously things that need to be looked at,” and if there could be any type of silver lining in this case, it’s that police departments and 911 centers across the country are likely examining their own practices.

WCPO's Evan Millward and Ashley Zilka contributed to this report.