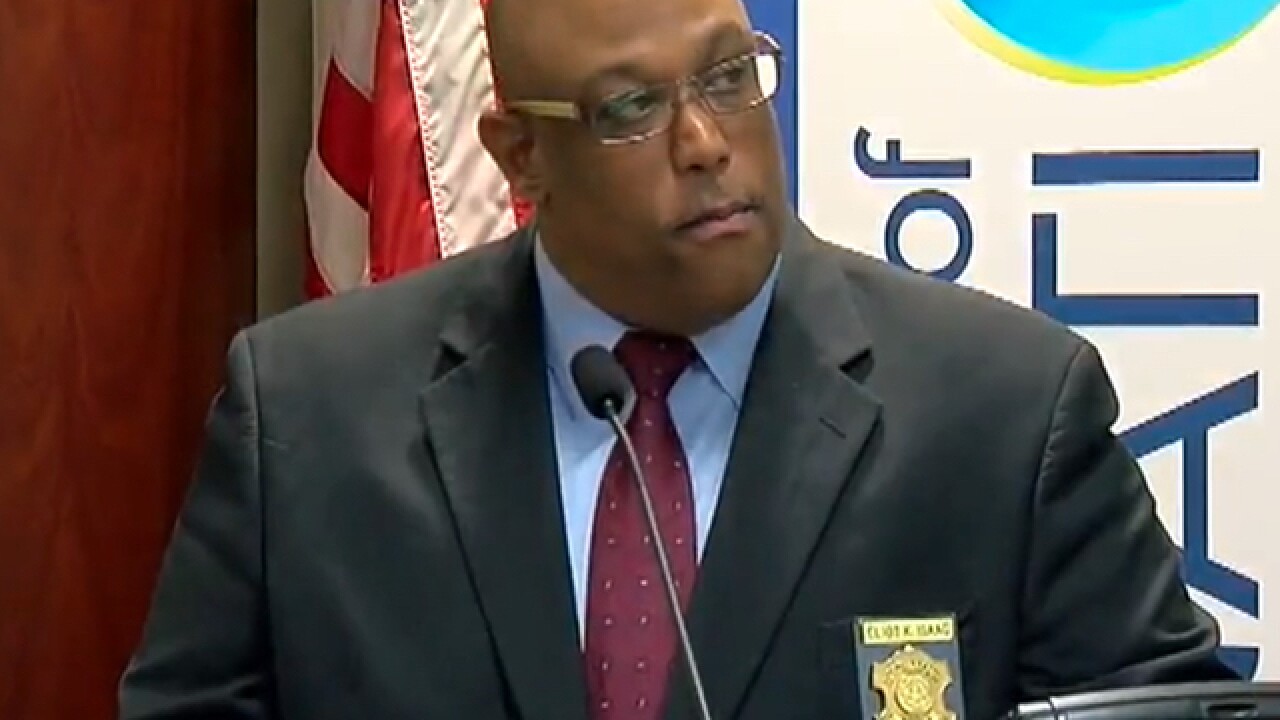 Copyright 2017 Scripps Media, Inc. All rights reserved. This material may not be published, broadcast, rewritten, or redistributed.
<p>Police Chief Eliot Isaac speaks to reporters during a news conference.</p>

No one has said why Bailey was "forced out," as Fraternal Order of Police president Dan Hils put it. However, that memo from Isaac to City Manager Harry Black gives some insight.

"His behavior is indicative of a systematic effort to undermine my authority as Chief and create a chaotic atmosphere inside of the department," Isaac wrote. "His efforts have been to establish pathways to evade or conceal matters that require my attention or decision making."

Bailey's attorney, Brian Gillan, said Bailey had been an "exemplary police officer for his entire 31 year career" and called accusations against him "scurrilous."

Black ultimately signed an agreement for Bailey to leave his decades-long police career, putting a match to months of brewing acrimony between Black and some police leaders.

However, Isaac's memo alleges a wide variety of misconduct, subterfuge and intraoffice sleight-of-hand, including "engaging in conversations with Federal Law Enforcement partners and authorizing investigations without my approval or permission," "intentionally undermining the Collaborative Refresh Process by encouraging … a confrontational attitude"

Gillan wrote in a statement Thursday that Bailey denies any inappropriate conduct. Bailey spoke with federal law enforcement partners about the so-called "Boxgate" incident, when FBI investigators took boxes from Councilman Charlie Winburn's office. Isaac had "removed himself from the decision-making process for fear of the potential political issues involved," Gillan wrote. Bailey and Lt. Col. Paul Neudigate believed there were documents related to Metropolitan Sewer District, and Bailey believed there would potentially be a conflict of interest if Cincinnati police examined them.

Gillan called Isaac's allegation about the Collaborative Refresh "perhaps the most offensive." In his response, Gillan accused Isaac of undermining the process. "Bailey has been a very public and vocal supporter of the Collaborative and believes it should be the backbone of CPD's operation," Gillan wrote.

One such document, an internal audit of overtime pay, was released shortly after District Five Capt. Bridget Bardua alleged Bailey and two other high-ranking police officials targeted her with discriminatory comments and "Monday morning quarterbacking" because she was a woman and she supported Isaac's leadership.

The overtime audit showed Bardua was one of the top overtime earners in the department, having collected $82,000 in overtime and paid time off. A sergeant who supported her federal discrimination claim collected $126,225.

Cranley, who now wants Black himself to leave, denied Bailey's ouster was the reason.

Gillan denied that Bailey was the source leaking confidential documents.

"Since the leaks are continuing, and LTC Bailey is no longer at CPD, it would certainly appear the Chief and the City Manager forced out the wrong person and irreparably damaged the reputation of a fine cop," Gillan wrote.