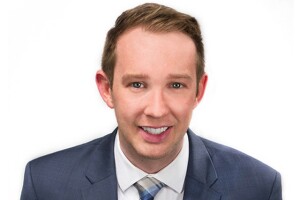 Other Positions Held Here: None

Where Else Worked:I started in visual storytelling at the Columbus Dispatch as a videographer and web producer in 2011. That September, I moved to Missouri to launch the Jefferson City bureau for KMIZ-TV (and ABC and Fox affiliate). I was promoted to weekend anchor and spent two years in that role before leaving in July 2014. School: Ohio University. E.W. Scripps School of Journalism. BSJ. 2011.

Most Proud-Work:It's humbling to see the work we do as journalists affect real change in our communities - from a simple community call to action, to changing the discourse and law. My first story at 9 On Your Side was about a Westwood daycare that had all its field trip money stolen. The Tri-State stepped up an more than returned what was taken within days - incredible!

Most Proud-Life:This is home. I have family from Cincinnati up through my hometown of Beavercreek, near Dayton. I couldn't be happier to be back near family and within a two hour drive of so many of my closest friends!

Love Tri-State:There's something good happening in Cincinnati and it's great to be part of it. You can see and feel the pride here - who wouldn't love that? I'm enjoying my ongoing mission to explore all the distinct neighborhoods here. And I'm always looking for the next great grilled cheese.

Favorite Local Spots:Each neighborhood is unique. But I'm partial to OTR because I call it home. A warm, sunny day in Washington Park is perfect. Clifton's Gaslight and Covington's Mainstrasse are beautiful neighborhoods as well. This city's parks have stellar views and I'm still exploring them.

Books: Detroit: An American Autopsy by Charlie LeDuff, anything by Mary Roach, Five Days at Memorial by Sheri Fink, Ishmael by Daniel Quinn

Other:I love meeting folks out and about - please feel free to introduce yourself and give me a food or drink recommendation!