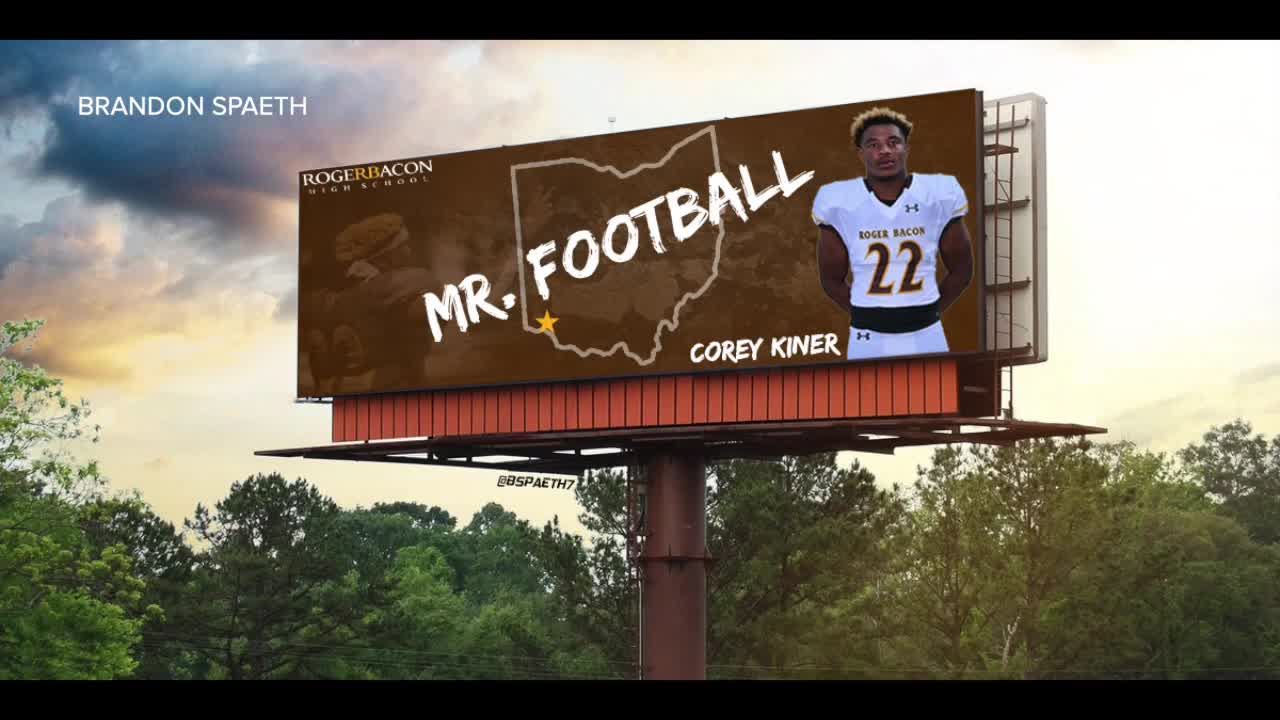 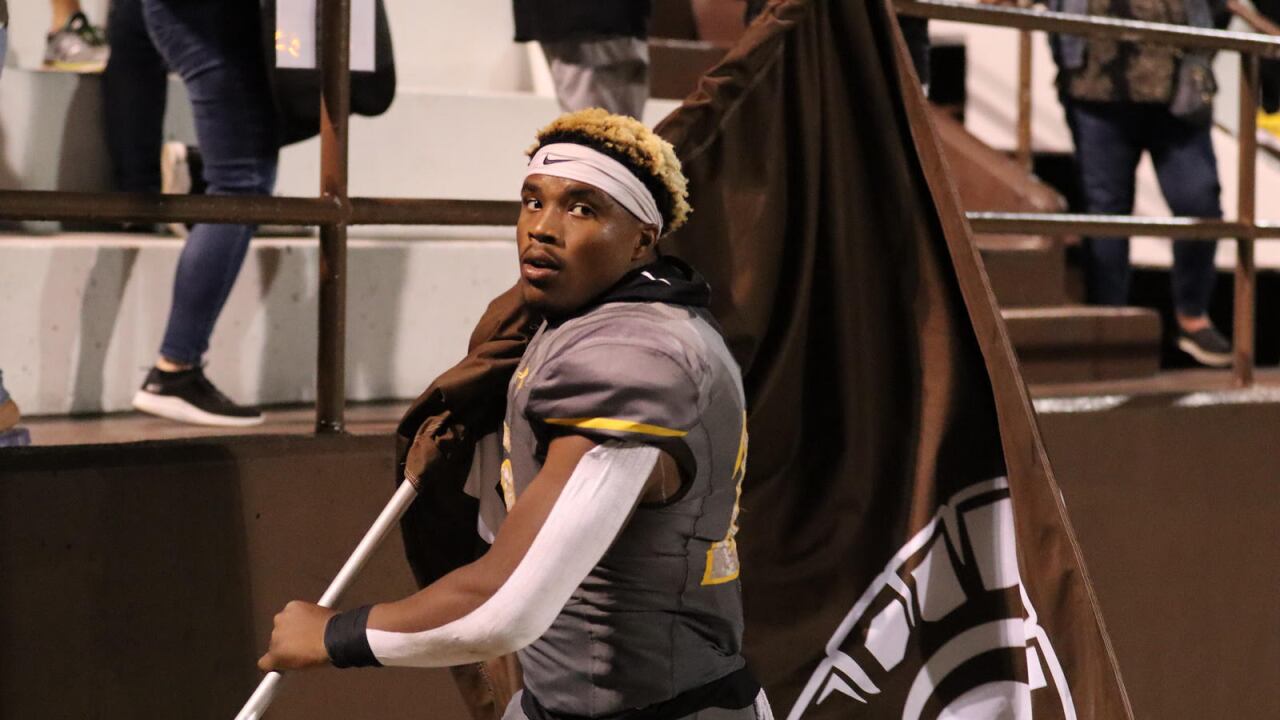 "It means a lot to me," Kiner said. "My dad (Clif Kiner) kind of predicted this when I was a freshman. When I was picking a high school people were telling me I wasn't going to get recruited (for college) at Roger Bacon. And my dad was telling me everything that I would accomplish if I came here and winning Mr. Football was one of them."

Kiner is scheduled to sign his National Letter of Intent with Louisiana State University (LSU) on Dec. 16. He will be forever known as Ohio's 2020 Mr. Football.

"It still hasn't really sunk in yet, but it will," Kiner said.

Roger Bacon coach Mike Blaut said the Mr. Football award is a very proud moment for Kiner, his family, the program and the school.

"For him to get it, it just shows how much hard work he's put in," Blaut said. "How many hours he's put in the weight room and conditioning and getting his body ready. And obviously just the sheer God-given talent that he has is just awesome."

"It's kind of like our version of the Heisman house," Edwards said. "We've got the guys from Cincinnati -- there's three of us now. So we want to keep adding to that list because there is such a great hotbed of football in Cincinnati that we need to get recognized for that."

A statewide panel of media representatives votes on the Ohio Mr. Football award.

The award is a significant way for Kiner to complete a memorable high school career this fall.

"He's a kid who a lot of his trophies -- which he's probably got about 500 of them by now -- he's giving a lot of them away to family members, his grandma, his relatives and cousins and everything," Blaut said. "I'm hoping this is one he holds onto because this is big-time for once again being only the third kid in Cincinnati to ever win it. That's impressive."

"I think it's extremely significant for Roger Bacon to show kids you can do great things here," said Roger Bacon defensive coordinator and strength coach Solomon Tentman, who also helps with college recruiting.

"However, it's more of a testament to Corey and the significant impact he has had on Roger Bacon. His will is simply undeniable."

Those who know him best at school say Kiner's impact is just as significant off the field.

"I think what I’ll remember most about Corey’s high school career is the humility he has always shown," Roger Bacon athletic director Steve Rossi said. "His athletic gifts are amazing and has allowed him to have a career that only few others have had, but inside the school walls he is a student and classmate to everyone. He is a 'yes sir/no sir' person -- very polite, down to Earth -- but extremely focused and determined. I can’t wait to see him at LSU."

Roger Bacon will remember so many of Kiner's standout games the past four years. The one that often stands out for Blaut is when Kiner scored eight touchdowns against visiting Cincinnati Hills Christian Academy in October 2019.

"It's just off the charts," Blaut said.

Kiner, named the Division V state offensive player of the year on Tuesday, rushed for 7,130 yards at Roger Bacon and is No. 10 on OHSAA's career rushing yards list.

Kiner, rated the nation's No. 7 running back in the 2021 class by the 247 Sports Composite, also joined the OHSAA all-time leaders by scoring 116 rushing touchdowns (third in state history), 125 total touchdowns (third) and 772 points overall (third).

Kiner, who is listed at 5-foot-9-and-a-half-inches tall and 211 pounds, helped to lead Roger Bacon to its first regional football title this past season. The Spartans (10-1) were a Division V state semifinalist.

He rushed for 1,866 yards (13.8 yards per carry average) and 35 touchdowns his senior season. He returned kickoffs on special teams, including a touchdown.

Kiner was one of the most recruited high school football players in Greater Cincinnati over the past few years.

"It has been an absolute joy promoting his video game numbers and (scholarship) offers over the last four years and I am forever indebted to him and his family for allowing me to be a part of something so special and discovering a new passion I will carry with me for years to come," Spaeth said.

Kiner verbally committed to LSU in early May after taking a virtual campus tour and not having visited Louisiana. Kiner had 28 scholarship offers during the recruiting process.

Blaut had to upgrade his phone at one point this past year because he received so many text messages, phone calls and emails from college coaches about Kiner.

Clif Kiner said his son received an estimated 200 messages a day at one point.

Corey Kiner found a connection with LSU running backs coach Kevin Faulk, a former NFL player, and Kiner was solid with his verbal commitment since this past spring.

Kiner is the first Roger Bacon football player to commit to a Southeastern Conference program since Isaac Curtis played for Kentucky in 1992, according to the Roger Bacon athletic department.

Blaut has no doubt Kiner will succeed in Baton Rouge. He won't soon forget what Kiner accomplished as a Roger Bacon Spartan.

"Obviously his skill as a football player is just exceptional," Blaut said. "And just everything that he could do on the field. His speed, his power, his stiff arm, his spin move -- all those things. But you know to top it all off at the end of the day, he's just a great kid."