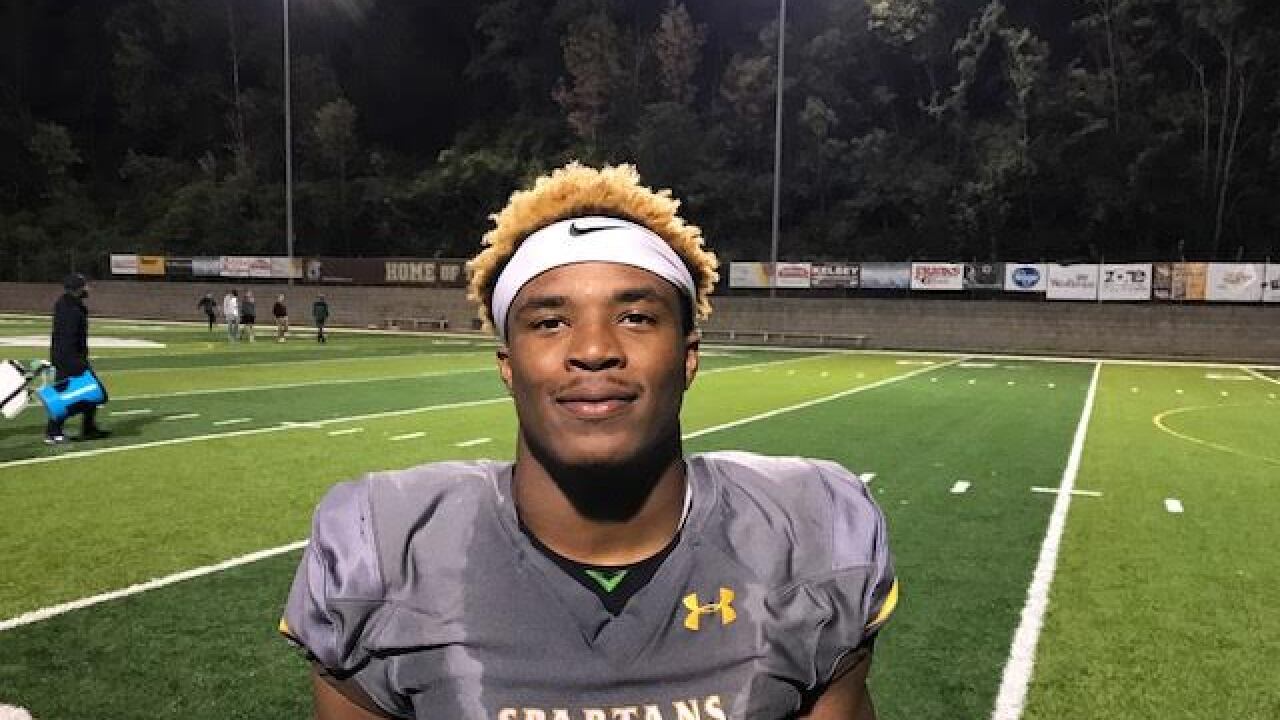 ST. BERNARD, Ohio — Roger Bacon football coach Mike Blaut struck a chord with his players late Friday afternoon when he offered them a reminder: There had been 325 days since the Spartans started this past offseason.

The players showed up to workouts at 5 or 6 a.m. on some days. Like every area team, they practiced and sacrificed their time from the winter to fall. Everything was earned.

When the Spartans defeated visiting Cincinnati Hills Christian Academy 58-32 Friday night in front of a large crowd at Bron Bacevich Memorial Stadium, supporters celebrated knowing Roger Bacon sits atop the Miami Valley Conference Scarlet division standings and in a good position to capture a playoff spot for the first time since 2010.

The Spartans are 7-1 for the first time since the 1971 season, according to Roger Bacon assistant athletic director Brandon Spaeth. Blaut jokingly reminded his players in the postseason he was a year old then.

“I tell you what, I am really proud of our guys,” Blaut said. “When we needed to, we made plays. Corey — he is unreal. He just made play after play. But you know what? We’ve got guys that made plays all over the field, too.”

Roger Bacon junior running back Corey Kiner continued to add to his significant legacy and a single-game stat sheet that will be difficult to match this season.

Kiner, rated the nation’s No. 6 running back in the 2021 class by 247 Sports, had 15 carries for 322 rushing yards and seven touchdowns. He also had a 78-yard kickoff return for a touchdown in the fourth quarter.

“I am very proud because what else could I ask for?” Kiner said. “It’s homecoming. We performed big on homecoming, and everybody came out to check us out, and my team just stepped up big time.”

“The offensive line stepped up big time,” Kiner said. “The receivers blocked big time and I just ran. That’s all I did.”

Roger Bacon senior center Nolan Tebbe, who had a sack on defense, said blocking for Kiner is very special.

“That’s a once-in-a-lifetime experience,” Tebbe said. “I am very happy I got to be a part of that. He’s an incredible running back. He makes our job easy, but I am also very proud of our line. We play hard. We go out there and get after it.”

Kiner scored on his second carry of the game when he ran off left tackle for a 73-yard touchdown down the left sideline. He also scored on touchdown carries of 48, 42, 35 and multiple other times. He finished the game with 50 points — 48 from touchdowns and two 2-point conversions.

Kiner has 4,178 career rushing yards, according to the school. No one had ever scored eight touchdowns in a game in a Roger Bacon uniform until Friday night.

“Favorite touchdown?” Tebbe said. “Gosh, all of them. I love every single one of them, especially just when he runs out and I get to pick him up and show the crowd this is just what happened. Just watching him and we watch 22 just screaming down the sidelines — that’s special.”

The Spartans led 30-12 at halftime with Kiner's seven carries for 221 yards and four touchdowns. The Spartans finished with 469 rushing yards for the game.

“Our kids lost to a very good football team,” CHCA coach Eric Taylor said. “Our kids didn’t quit. They kept swinging. They kept fighting. They played hard until the end. Roger Bacon was the better team and Corey Kiner is a special athlete. He was the man and took care of business. They capitalized on that.”

CHCA senior quarterback Cole Fisher had 31 carries for 145 yards and four touchdowns. Senior Adam Bauer had four receptions for 121 yards for the Eagles.

“Cole is a special athlete as well,” Taylor said. “He has a warrior’s mindset. He does not quit. He doesn’t give up. He throws it well. He runs it. He keeps extending plays. He’s just battling it out there.”