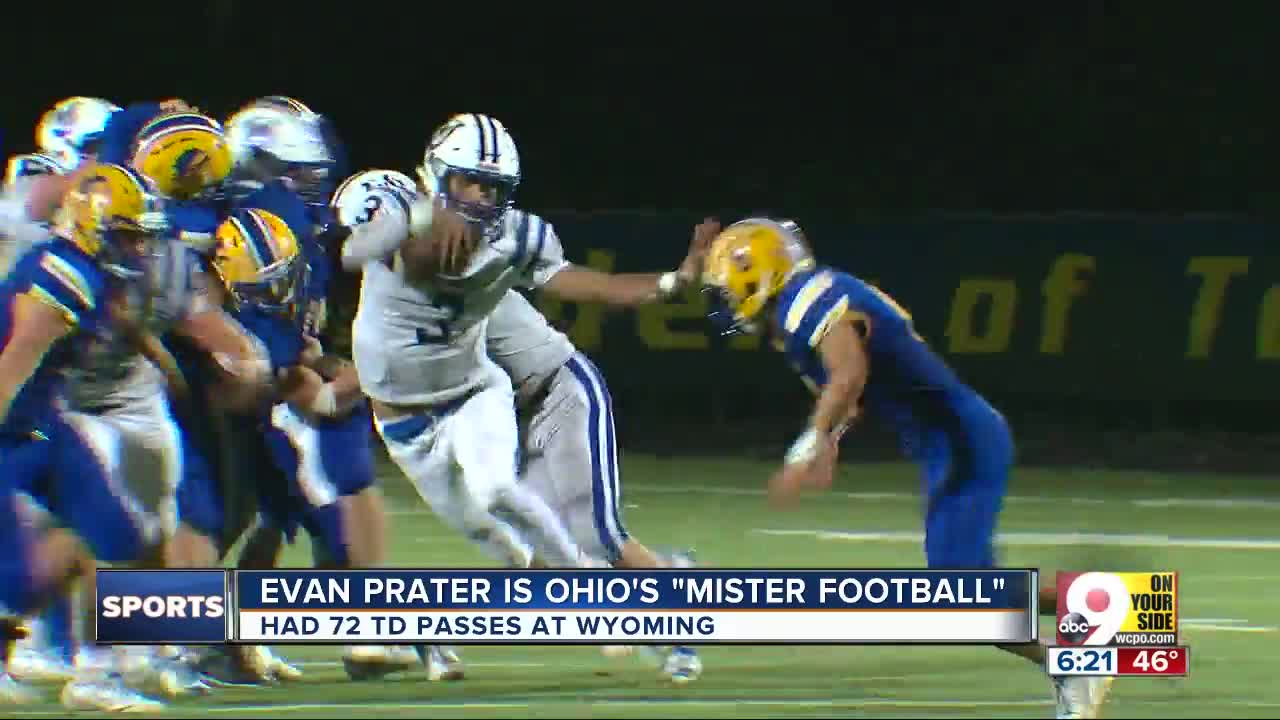 CINCINNATI — The drought is over. The Ohio Mr. Football award has returned to Greater Cincinnati.

“This means a lot to me. It means a lot to my family, but I think it means something to the whole city of Cincinnati,” Prater said. “I am so happy to bring Mr. Football back here. I’m so glad to represent Wyoming, my family and everyone in this great community.”

Prater, who is verbally committed to the University of Cincinnati, is the first Ohio Mr. Football from the Cincinnati area since Norwood’s Marc Edwards won the prestigious award in 1992. Prater is the second area player to win the annual award since it began in 1987.

“I think Evan Prater embodies what you want your program to be about,” Wyoming coach Aaron Hancock told WCPO. “Hard working, dedicated, talented – just charismatic, full of energy and just enjoying to play the game. Evan is a tremendous influence not only to the kids in our program but to the kids in our community because of the way he carries himself on a daily basis.”

The Mr. Football award is voted upon by a statewide panel of media representatives. Voters considered this year's statistics along with career impact and team achievement.

Prater, who will compete in the All-American Bowl in January, threw for 1,816 yards and 21 touchdowns and rushed for 1,509 yards and 28 touchdowns this season for the Cowboys (13-1), who were a Division IV state semifinalist.

“For me to coach Evan his four years of high school and seeing him develop into the player and person that he is right now is a tremendous honor,” Hancock said.

Prater was 40-2 as a starting quarterback during his high school varsity football career and helped to lead the Cowboys to the 2018 Division IV state title. Wyoming had a 28-game win streak entering last weekend. Wyoming has a 41-game regular season win streak.

“These past four years were the best years of my life,” Prater tweeted Sunday. “I couldn’t ask for a better group of people to play with, be coached by, and play in front of. The rich tradition of Wyoming football will always continue and I can’t wait to watch it.”

Other finalists for this year's award were:

Prater, a four-star player by 247 Sports and the state's No. 2 rated player overall in the 2020 class by the recruiting website, is the fourth player who committed directly or later played for the University of Cincinnati to win Ohio Mr. Football, according to the Ohio High School Athletic Association.

Prater, who is 6 feet 5 and 190 pounds, was named the Division IV state co-offensive player of the year earlier this week.

Prater was also named the Cincinnati Hills League offensive player of the year for a second straight season this year. He was a three-time all-CHL selection. He was also named the Southwest District Division IV co-offensive player of the year with Roger Bacon junior running back Corey Kiner this season. Prater was part of a Wyoming senior class that finished with a 52-3 record.

Prater is also a standout basketball player for the Cowboys.

“He is a competitor with every definition of the word,” Hancock said. “Evan is an extremely hard worker who has a positive and contagious energy that is reflected on a daily basis on the practice field.”