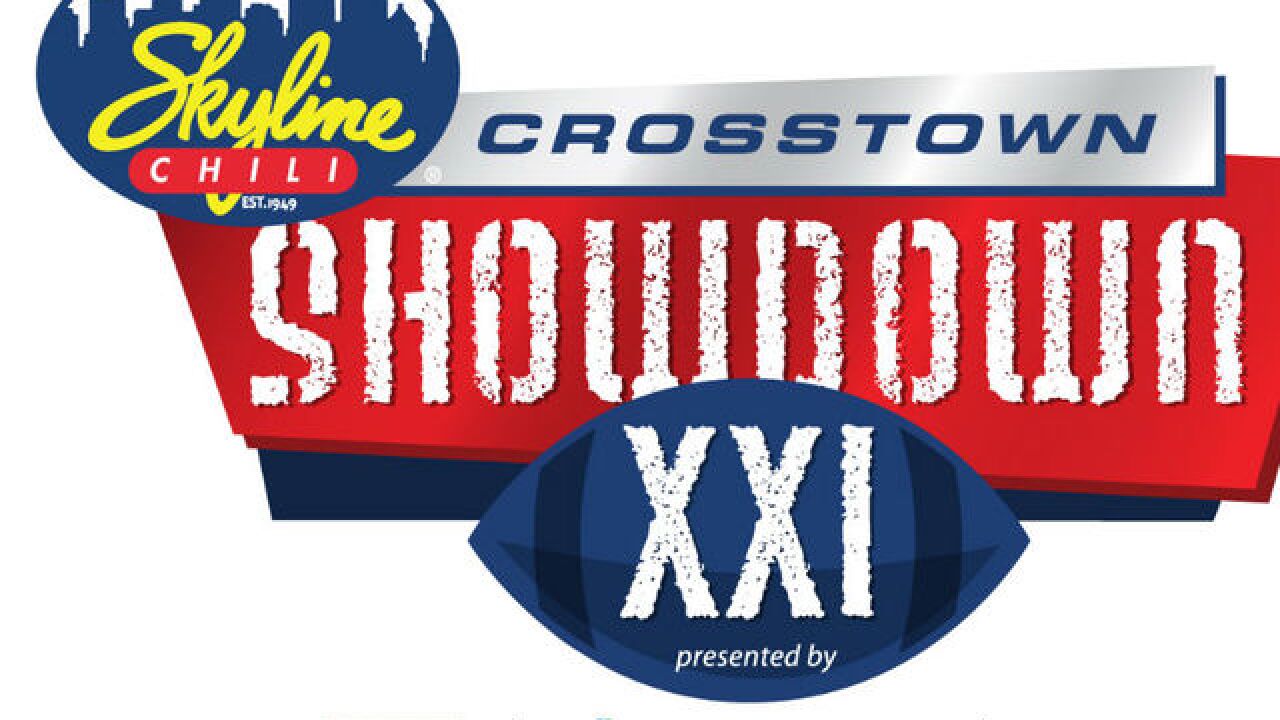 This year's Showdown, the largest and longest running high school football showcase in the country, features marquee games every Friday. Previously, there were 20-plus games in the first two to three weeks of the season.

"I think this signifies the best high school played anywhere - top to bottom - in the country," said In-Game Sports President and Showdown organizer Tom Gamble. "I think what excites me the most is to be able to take the Showdown brand and extend it through the entire regular season. People love Friday nights. To be able to have one Showdown game from Aug. 17 to Oct. 26 - that's pretty cool."

The Showdown, presented by First Financial Bank, Mercy Health Orthopaedics & Sports Medicine and Meijer, is entering its third decade. A total of 244 Showdown games have been played since 1998.

On Thursday, Aug. 23, Anderson (10-2) plays Mount Healthy (4-6) in a game played at Princeton. Anderson, which has consecutive postseason appearances, features senior offensive lineman Zeke Correll (Notre Dame commit), who is ranked the state's No. 4 player overall in the 2019 class by 247Sports.

The Ohio schedule is packed Aug. 24 including La Salle (10-3) at Colerain (11-3) - the fourth consecutive season these two West Side schools have met. Colerain, a Division I state semifinalist in 2017, returns several talented players on both sides of the ball.

Milford (8-3), which made the postseason in 2017 for the first time since 1986, plays at Princeton (4-6). The Vikings are led by several talented players including 2020 defensive end Darrion Henry, who is ranked the state's No. 2 player overall by 247Sports.

Also, Loveland plays at Sycamore Aug. 24. The Aviators (9-3 in 2017) have consecutive playoff appearances.

The Showdown also features reigning Division I state champion Pickerington Central playing Phillips (Ill.) Academy Aug. 26 in a game at Otterbein University in Westerville, Ohio near Columbus. That game will be televised live on ESPN at 12:30 p.m.

Pickerington Central (14-1), located in Greater Columbus, is the reigning Division I state champion. Phillips Academy (14-0) is from Chicago and has won two of the past three Illinois Class 5A state titles.

"That game will have no shortage of probably 6 to 10 of big-time recruits playing in it," Gamble said.

(The Lakota West versus St. Xavier game at Paul Brown Stadium is not part of the Showdown).

The Showdown continues Aug. 31 with Kings at Lakota East.

On Sept. 7, Cincinnati Hills Christian Academy travels to Wyoming in a game that the Cowboys will celebrate their 100th anniversary of football at the school. CHCA is 30-6 the past three seasons while Wyoming is 32-5 including perfect regular seasons in 2016 and 2017.

Another rival game, also a key Eastern Cincinnati Conference matchup, is set for Sept. 14 when Turpin plays at West Clermont, which capped its inaugural season by earning a D-I playoff berth.

Two Showdown games are set for Sept. 21, with Lakota West hosting Oak Hills in an early key Greater Miami Conference game, and Centerville traveling to Springboro in a matchup between Greater Western Ohio Conference teams that made the playoffs.

Another rivalry highlights the Showdown on Sept. 28 when Mariemont hosts Indian Hill in a pivotal Cincinnati Hills League game.

A classic Greater Catholic League South Division game between Elder and Moeller is one of two Showdown games on Oct. 5.  That game will be played at Nippert Stadium.

Elder is looking for a return to postseason play after missing qualifying by a percentage of computer points last year, while Moeller is beginning the Doug Rosfeld era as the Crusaders’ alum takes over the program.

The last three weeks of the regular season feature games in Dayton, Northern Kentucky and Cincinnati as part of the Showdown.

Boone County rivals Conner and Cooper square off on Oct. 19 in Union, with the two schools having split the last two meetings.

Tickets to all Showdown games can be purchased in advance of game day at the participating schools. Fans should contact their favorite school for current ticket office hours and prices.