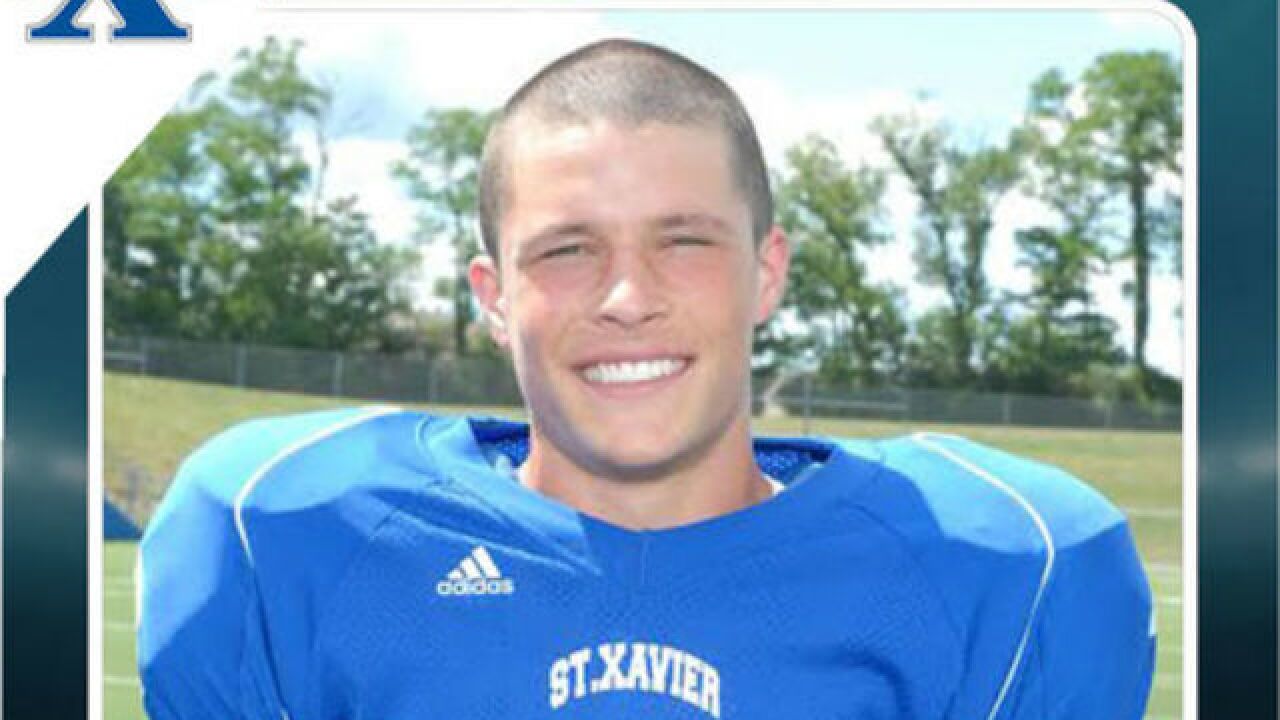 Copyright 2017 Scripps Media, Inc. All rights reserved. This material may not be published, broadcast, rewritten, or redistributed.
<p>Carolina Panthers star Luke Kuechly played in the Skyline Showdown for St. Xavier.</p>

As the Skyline Chili Crosstown Showdown celebrates its 20th anniversary this month, WCPO.com has selected the All-Showdown Team.

The Ohio portion of the Showdown schedule begins this week. Over the course of 20 years, this annual Cincinnati high school event has highlighted numerous talented players who've gone on to play in college and the NFL.

We’ve scoured nearly every game program since 1998 thanks to the assistance of organizer Tom Gamble. This past spring, we conducted online research by looking at stories, photos and archived awards.

We’ve made informal interviews with event and school officials, coaches and players and reached out to longtime area high school football observers.

Yes, every position will be up for debate. There are limited spots on each side of the ball. We can only pick one coach too.

We can’t select every NFL player nor can we select every high school standout or take into account every statistical category from each game or season.

But, we think you’ll enjoy reminiscing about these top notable alumni who’ve participated in the Showdown since its inception in 1998.

RB: Bradley Glatthaar, Elder: He led head coach Doug Ramsey's squad to back-to-back Division I state championships in 2002 and 2003. Glatthaar was a three-year starter who helped the Panthers compile a 39-4 record. He earned first team all-city and all-district honors in each of his last two seasons. He was first team all-state selection as a senior. He set a state championship record with 248 rushing yards and three touchdowns in the 2003 state title game. He played at the University of Cincinnati.

WR: DeVier Posey, La Salle: The Toronto Argonauts wide receiver had a standout career at Ohio State and was a U.S. Army All-American at La Salle. He played in the Showdown from 2004 to 2007. He had 48 receptions for 776 yards and eight touchdowns in his senior year of 2007 for the Lancers. He concluded his Ohio State career with 136 career receptions for 1,955 yards.

WR: Dwayne Stanford, Taft: The 2012 U.S. Army All-American played in the 2011 Showdown in Taft’s game against Friendship Collegiate Academy (Washington, D.C.) in a game at Colerain and televised on ESPNU. Friendship Collegiate won 12-6. Stanford, who was also a basketball standout at Taft, played football at the University of Oregon.

TE: Kyle Rudolph, Elder: The Minnesota Vikings tight end is entering his seventh season in the NFL. The former Notre Dame standout played in the Showdown in 2006 and ’07. He was named a U.S. Army All-American in his graduation year of 2008. He was named the Pro Bowl MVP in 2013. He was also a basketball standout at Elder.

OL: Eric Wood, Elder: The Buffalo Bills center is entering his ninth season in the NFL. The 2005 Elder graduate played in the Showdown games in 2003 and 2004. He played college football at the University of Louisville.

OL: Ryan Kelly, Lakota West: The Indianapolis Colts center was the No. 18 pick in the 2016 NFL Draft. The 2011 Lakota West graduate and Under Armour All-American was a standout at Alabama where he won the Rimington Trophy as the nation's top center and the National Championship as a senior.

OL: Alex Boone, Lakewood St. Edward: The Minnesota Vikings offensive lineman is a 2005 St. Ed’s graduate. He played against St. Xavier in the 2004 Showdown game, which the Bombers later won via forfeit. Boone, a U.S. Army All-American in high school, later played at Ohio State. He’s entering his eighth season in the NFL.

OL: Andrew Norwell, Anderson: The Carolina Panthers guard is entering his fourth season in the NFL and signed his free agent restricted tender this spring to be under contract this season. The former Ohio State standout and 2010 Anderson graduate played in the 2008 Showdown game as a junior in a 56-6 win over Taft.

OL: Michael Munoz, Moeller: The son of Pro Hall of Famer and Bengals legend Anthony Munoz, Michael played in the 1998 and 1999 Showdown games. As a senior offensive tackle in 1999, he was 6-7 and 285 pounds and listed by USA Today as one of its Super 25 top prep players. He later starred at the University of Tennessee.

DL: Adolphus Washington, Taft: The second-year Buffalo Bills defensive tackle played in the 2011 Showdown game against Friendship Collegiate Academy. As a defensive end, he had two sacks and several tackles in that game. He was named to the 2012 U.S. Army All-American Bowl with his Taft teammate Dwayne Stanford. He later starred at Ohio State.

DL: Greg Scruggs, St. Xavier: The former drummer for the St. Xavier marching band thrived in his football career with the Bombers. Scruggs played in 2007 game against Winton Woods as a senior. He later played at the University of Louisville and is a two-time Super Bowl champion (Seahawks in 2014 and Patriots in 2017).

DL: Eddie Goldman, Friendship Collegiate Academy (Washington D.C.): He played in the 2011 Showdown game in a 12-6 over Taft at Colerain. He recorded two sacks in first half. He tweaked an ankle in second half and left game in late third quarter. He helped Florida State to the 2013 BCS championship. He’s a nose tackle for the Chicago Bears.

LB: Luke Kuechly, St. Xavier: The 2013 NFL Defensive Player of the Year is three-time Pro Bowl selection for the Carolina Panthers. He played in Super Bowl 50. The 2009 St. X graduate played in Showdown games in 2007 and ’08. He was later a three-time First Team All-American at Boston College. He could become the first Showdown alum to be enshrined in Canton.

LB: Jordan Hicks, Lakota West: The Philadelphia Eagles middle linebacker is entering his third season in the NFL. The 2010 Lakota West grad is emerging as one of the NFL’s top young players and could be on the cusp of a Pro Bowl selection. He played in Showdown games from 2007 to 2009. He was an Under Armour All American his graduating year of 2010.

LB: Ricky Brown, Elder: The former Boston College standout played in Showdown games in 2000 and 2001. He recorded 184 tackles during his Boston College career. He played with the Oakland Raiders from 2006 to 2011. The 2002 Elder graduate is now the special teams coordinator and outside linebackers coach at Boston College.

DB: Eugene Clifford, Colerain: The 2007 U.S. Army All-American was a Parade All-American his senior year. He played in Showdown games from 2004 to 2006. The safety had 130 tackles and four interceptions his senior season. He signed with Ohio State but played at Tennessee State University where he earned first-team all-conference honors. He was later an undrafted free agent with the Baltimore Ravens.

DB: Stefon Diggs, Our Lady of Good Counsel (Md.): The Minnesota Vikings wide receiver played for Good Counsel in its Showdown game at St. Xavier when he was a junior in 2010. He had five receptions for 91 yards as Good Counsel defeated the Bombers 21-6. He’s entering his third season in the NFL.

DB: Sam Hubbard, Moeller: The Ohio State standout defensive lineman played in the 2012 and 2013 Showdown games and helped to lead the Crusaders to back-to-back Division I state titles in Canton those seasons. He’s on the watch list for the Lott IMPACT Trophy this season. Already a veteran of 26 games played and 14 starts at defensive end, he ranks second on the team in both career tackles-for-loss (16.0 for 86 yards) and quarterback sacks (10.0) for the the Buckeyes. His impressive list of statistics includes 74 career tackles, an interception, three pass break-ups, two fumble recoveries and a forced fumble.

DB: Brandon Underwood, Hamilton: The 2004 Hamilton graduate won a Super Bowl with the Packers and also a Grey Cup (Calgary). He played in the 2003 Showdown game against La Salle. He later played at the University of Cincinnati.

K: Danny Milligan, St. Xavier: The former area player of the year won two state titles with the Bombers (2005 and 2007). He was a three-year letterwinner as a wide receiver, kicker and punt returner. He shared the 2007 Associated Press Ohio Offensive Player of the Year honors after having 37 receptions for 564 yards and seven touchdowns. He set an Ohi

P: Drue Chrisman, La Salle: Considered the nation’s No. 1 punter in the 2016 class, he was a U.S. Army All-American and signed with Ohio State. He’s expected to be the Buckeyes’ starting punter after redshirting as a true freshman. He averaged 46.4 and 43.0 yards in the 2015 and 2014 seasons at La Salle. He helped the Lancers to back-to-back Division II state titles. He was 38 of 40 on extra points as a senior.