Wyoming's Pierson Rogers is a reliable leader for the Cowboys 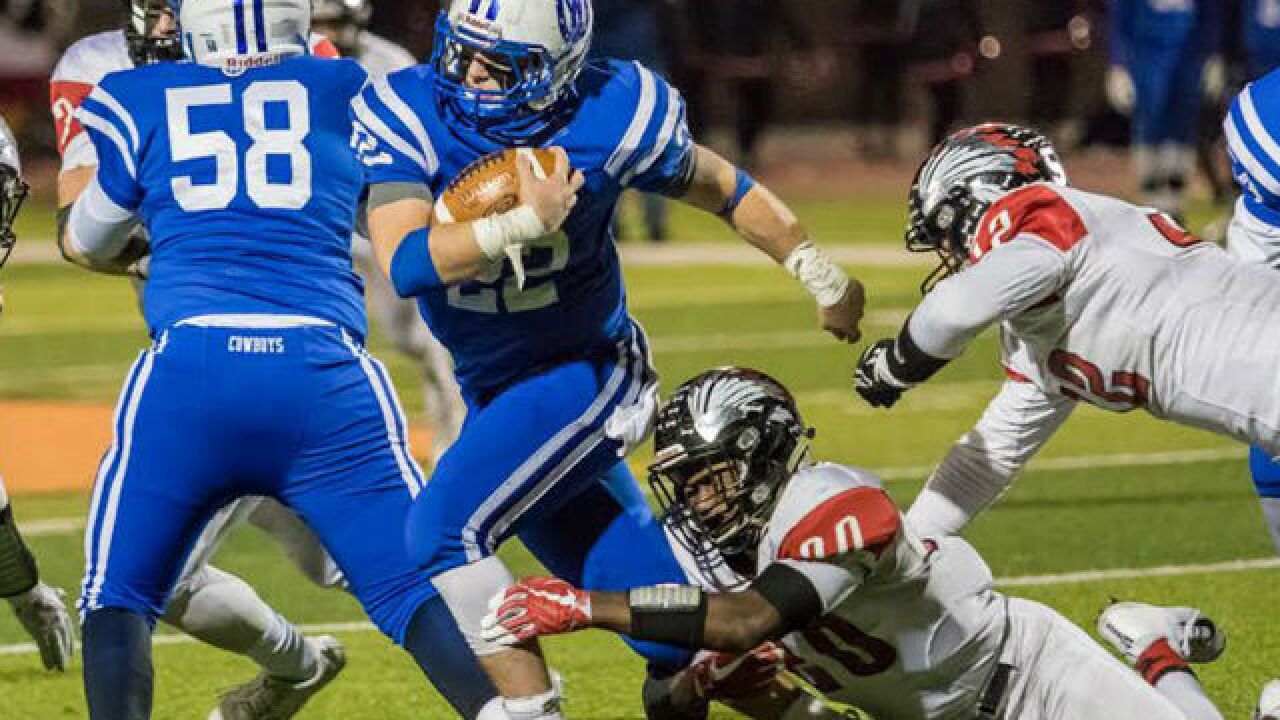 Copyright 2018 Scripps Media, Inc. All rights reserved. This material may not be published, broadcast, rewritten, or redistributed.
<p>Wyoming senior running back Pierson Rogers rushed for 1,306 yards and 22 touchdowns in 2017 for the Cowboys. (Photo by Rod Apfelbeck)</p>

WYOMING, Ohio – For as long as he can remember, Pierson Rogers has watched Wyoming High School football.

As a Kindergarten student, he’d played along the open spaces at Bob Lewis Stadium during Friday nights in the fall while the grills permeated the air with smoke.

He saw his three elder brothers – Dawson, Hudson and Mason – wear the Cowboys’ uniform with pride. Pierson watched with interest as Wyoming played its Cincinnati Hills League rival Indian Hill over so many years.

As the 17-year-old Rogers enters his senior season, he will continue to have an opportunity to write his legacy with this storied football program.

And when the running back and linebacker graduates in the spring of 2019, Rogers may have played the most varsity football games of anyone in the 100-year history of the program along with senior wide receiver Joey Edmonds. Currently, Jake Edmonds hold the record with 48 games. Rogers and Joey Edmonds have played 37 varsity games.

Fittingly, those 100 years are being celebrated Sept. 7 in a highly anticipated game against Cincinnati Hills Christian Academy. An estimated 300 players are expected to return to Wyoming High School for a special weekend.

Rogers’ brothers will be there and so will be countless other families who’ve been associated with Wyoming football over the years.

Rogers, who is receiving Ivy League interest, enters this season with 1,898 rushing yards – the CHL’s active leader in rushing yards, according to TriStateFootball.com .

“He does a fantastic job for us,” Wyoming coach Aaron Hancock said. “He is a hard-nosed football player. Just a tremendous kid.”

In fact, Rogers last season was Wyoming’s first all-state running back since P.J. Pope garnered those honors in 2001, according to Hancock.

“That’s awesome because there have been a lot of great players here,” Rogers said. “It’s amazing. There are a lot of kids that have come through here that I’ve known personally and they are phenomenal athletes. I take a lot of pride myself playing here. I hope I can teach that to the young guys.”

Wyoming enters this season after having back-to-back 12-1 seasons. The Cowboys understand the expectations from the community. They know they want to get past the regional final.

“We’re a family here,” said senior linebacker/offensive lineman Hasan Black, whose brothers Jibreel and Larry previously played at Wyoming. “We’re tough. We all have each other’s back. We all count on each other. We have a great focus.”

Rogers, a two-year captain, prefers the focus to be on the team. The 5-foot-10, 215-pounder said his teammates are keeping things in perspective as the Cowboys enter the season opener Aug. 24 against visiting Columbus Academy.

Ten starters return on offense and nine on defense. Yet, the Cowboys are taking nothing for granted. “

"We can’t get ahead of ourselves,” Rogers said. “I know there is a lot of talk that we can go far in the playoffs but we have to stay level-headed and we’re not better than what we do. We have to stay cool and it will play itself out.”

Rogers started as a freshman linebacker with Wyoming. He moved over to running back his sophomore season.

“He’s just a workhorse,” Wyoming Offensive Coordinator Keith Jordan said. “There’s flashy players all over the state with guys running crazy times and the height and weight and all that stuff. Pierson is one of the best high school football players I’ve ever seen. He’s going to graduate from Wyoming being one of the most productive players as a two-way guy to ever come through here.”

Rogers is a leader on the field and in the weight room. He doesn’t complain. He played through nagging injuries. He had a rib injury in the November playoff game against Indian Hill in which he had 40 carries for 297 yards.

“I know I can count on him at any point to get the yards we need and do the dirty work as well,” Jordan said. “He’s a great blocker and a great pass catcher out of the backfield. He never takes a break. He flips around and goes on the other side of the ball making tackles and causing havoc.”