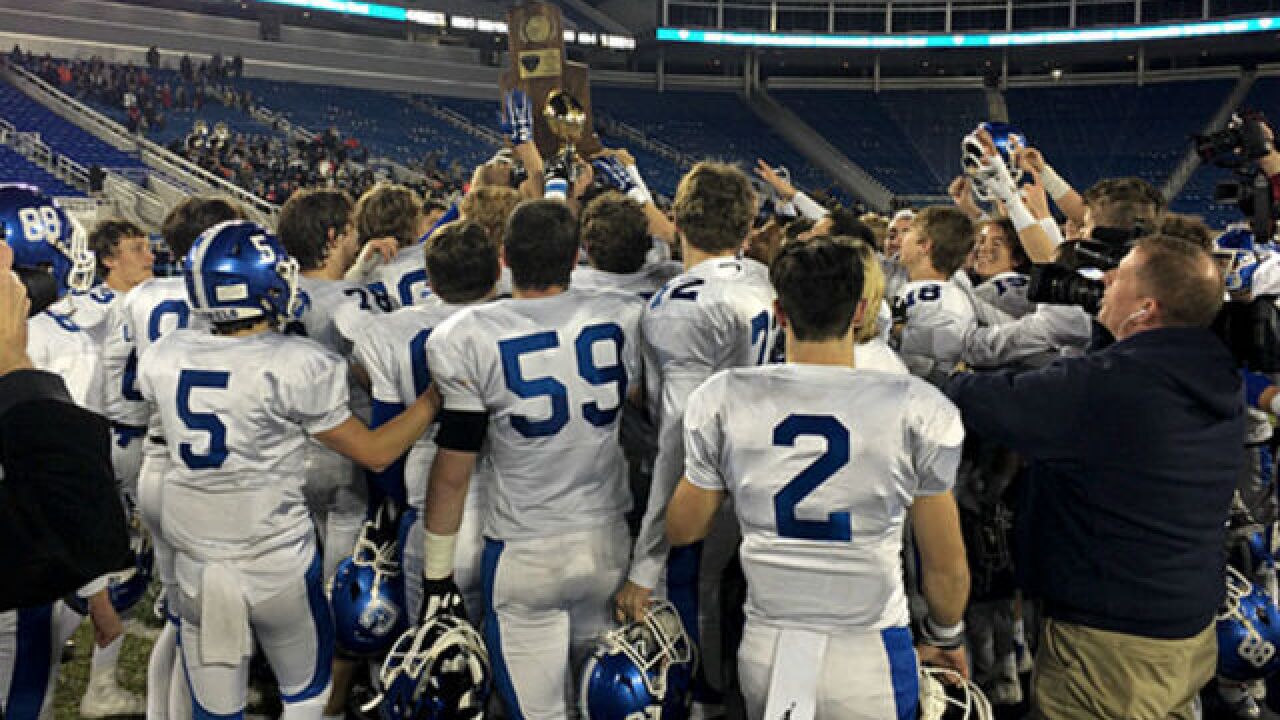 Copyright 2018 Scripps Media, Inc. All rights reserved. This material may not be published, broadcast, rewritten, or redistributed.
<p>The Covington Catholic football team won the Class 5A state title in 2017 with a 15-0 record. (WCPO file)</p>

“It energizes you for the first game,” Stonefield said of playing in the Showdown.

Lawrenceburg (11-2 in 2017) plays at East Central (12-3) in a renewal of that Southeastern Indiana rivalry at 7:30 p.m. Friday. Prior to this summer, East Central had grass surface for many years.

McGinness is on pace to become CovCath’s all-time rusher. He rushed for 1,418 yards and 22 touchdowns as a junior.

A new and expanded format of the Showdown includes 44 schools playing in marquee games every Friday night all season from Aug. 17 through Oct. 26. Previously, there were 20-plus games in the first two to three weeks of the season.

The Ohio season starts Aug. 22 when Withrow plays Woodward at 7 p.m. at Stargel Stadium in the Showdown. Purcell Marian also plays Summit Country Day at 7 p.m. at Walnut Hills in a game that is not part of the Showdown.

The focus this week is on Friday night. This is the second straight season the two Southeastern Indiana rivals will play in the Showdown.

East Central defeated host Lawrenceburg 15-14 in the 2017 season opener . The schools have a four-year deal in place through 2020 with the game returning to Lawrenceburg in 2019.

“We are excited about the opportunity to play East Central in the Skyline Showdown for the second year in a row,” Lawrenceburg coach Ryan Knigga said. “It is a known secret, EC will be very good. It is a good opener for us. We let one get away last year here in the Pit. This game will be a great challenge for this team.”

East Central has several talented players including senior quarterback Alex Maxwell, a three-year starter, who missed several games in the middle of last season with an injury. His talent and experience is an asset to the Trojans.

The Trojans will be led in the backfield by senior running back Eric Rosemeyer and sophomore running back Jake Fike.

The receiving corps was a pleasant surprise this summer with the likes of junior Andrew Ober, junior Mac Studer, a high jumper, junior Trevor Booker and senior slot receiver Liam Jones. East Central also has sophomore Luke Collinsworth, a 6-6, 280-pound lineman who can play tight end with his ability to catch and good footwork.

The defense is led by several players including junior defensive lineman Gage Ertel and his brother, senior Gaar Ertel, along with senior linebacker Brett Fox.

“We are restructuring a few things here this year and EC is coming off a state run and returning some special players,” Knigga said. “We accept the challenge and our kids will be prepared. It's Game 1 of 10, so win or lose, you learn more about your team and work to improve each week. We will put all our chips on the table and see what happens.”