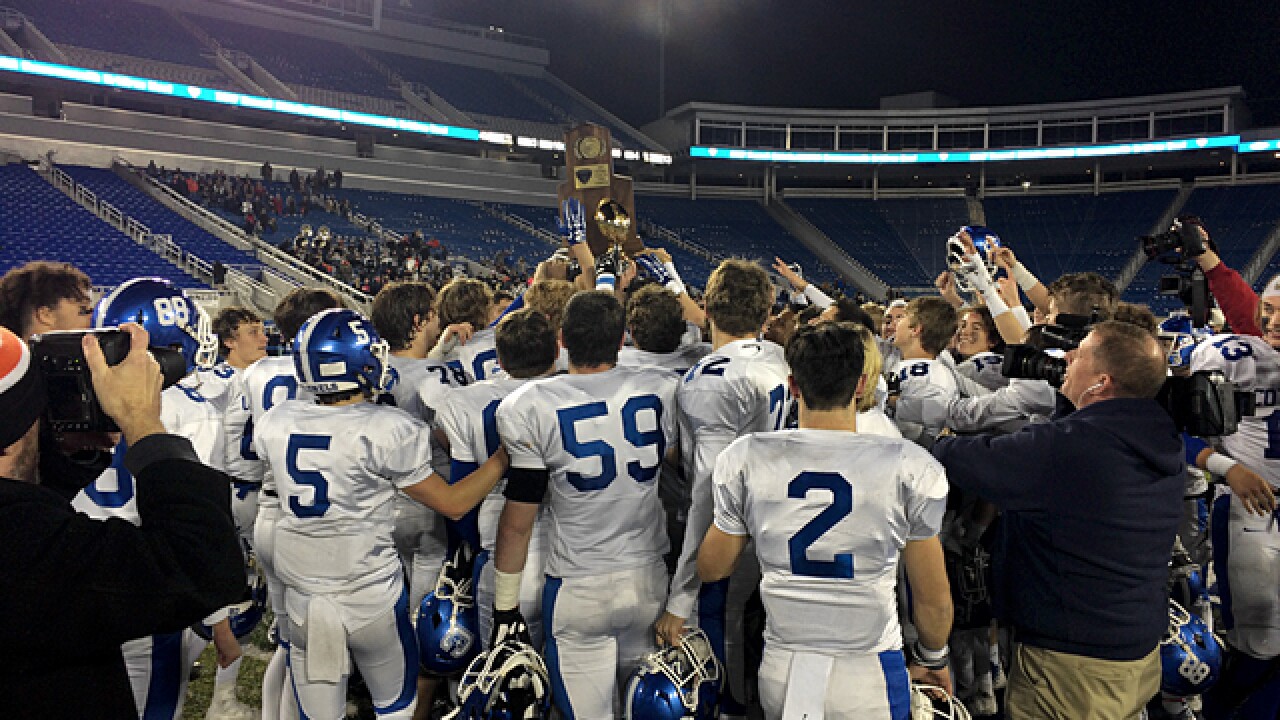 Mixing their high-flying pass and ground-churning run offense to perfection, the Colonels were nearly unstoppable as they earned their 15th win of the season against no losses, this time against Madison Southern out of Berea, in front of a championship game-record attendance of 10,646 at Kroger Field.

While it was all but over by the end of the first half, the scoreboard read 49-13 at the finish, and finally, the Colonel players could shout to the heavens that no team in Class 5A is better.

All has been said and done. Now they’re bringing their seventh state title trophy home to Park Hills.

“I always dreamed of being here,” said junior running back Casey McGinness. “This is an amazing feeling. Just amazing.”

It would be hard to pick just one moment during Saturday night’s championship game that encapsulated the season, as the game started off a bit imperfect. There was a missed receiver here, a missed block there. Blame an abundance of adrenaline, the coaches said. Yet the Colonels fought through those moments to make more than enough winning ones.

In the end, the championship was won on the arm – and most notably in this game, the feet – of senior quarterback AJ Mayer. Time and again, Mayer tucked the ball and ran for first downs to keep drives alive, notching 66 yards on eight carries for three touchdowns in the first half alone.

“I haven’t run the ball much all year,” Mayer said afterward, admitting that with no more games this season, he might as well risk running the ball when open. “I was locked in to get that (championship) ring.”

But of course, it’s his arm that draws oohs and ahhs from the crowd. And on this night, Mayer had immense help from his wide receivers, who consistently out-jumped, out-fought and out-hustled Madison Southern’s defensive backs for balls. Witness the 49-yard pass on 2nd and 15 to senior Malachi Pike, where Pike came back to the ball and rose up over his defender to haul in the catch.

After the adrenaline settled, there were more pinpoint passes, like the drop-in-the-bucket throw Mayer made to tight end Michael Mayer (his brother) down the right sideline for a 26-yard gain.

Madison Southern (11-4) proved to be a more than worthy opponent in the first half. After a punt on their first possession, the Eagles were methodical in the way they worked the ball down the field, taking advantage of a Colonel defense that had given up just one touchdown during the regular season.

Eagles quarterback Landen Stacy earned respect as he consistently ran through holes, to the tune of 137 rushing yards on 24 carries. He also completed 11-20 passes for 111 yards.

“I couldn’t be more proud of our guys,” said Madison Southern Head Coach Jon Clark. “This team is special. We never thought we didn’t have a chance.”

But the Eagles could not stop the Colonel offense. A 60-yard touchdown pass from Mayer to running back Casey McGinness near the end of the third quarter, followed by the ensuing two-point conversion, gave CovCath a 49-13 lead, and provided a running clock for the remainder of the game (their 12th such running clock in 15 contests).

It allowed the fans, families and players an entire quarter to start their celebration. When it was over, when Coach Eviston had been doused with Gatorade, and when the seniors had been taken out of the game to thunderous applause, the stadium played “We Are the Champions” and the trophies were presented.

History began to settle in. Most fans know this is the first time a CovCath team has gone undefeated to win a state title. And just a few years ago, back to before Eviston was hired, many of those same fans wondered what the future of this program would be. They wondered if they could ever keep up with Highlands and their success, let alone win another state title.

Two years ago, the Colonels won just five games with sophomore quarterback AJ Mayer. This year, they did not lose any.

“We didn’t have any slow points all season,” said senior tight end and linebacker Kameron Butler. “We just kept fighting.”

“I can’t really say,” McGinness said, smiling. “We’ve definitely competed and proven that we’re up there with (the best). We’re state champs, I can tell you that.”

When asked his thoughts if this year’s squad was the best in school history, Terry Boehmker, a 1972 CovCath alum, and a journalist for more than 30 years who is also a member of the Northern Kentucky Sports Hall of Fame, said it matter-of-factly.

After the trophy presentation, Coach Eviston gathered his team together for one last huddle on the University of Kentucky field. He stressed to take in the moment.

“Remember what it took to get here,” he said. “You will be successful if you do.”

He told the media he would remember this group fondly.

“They were locked in, ever since day one,” he said. “I don’t know if we had a bad practice this year. They weren’t scared of work. They have fun and love each other. That goes a long way.”

More awards will be given to this squad, and more debates will be had (whether Mayer will be named CovCath’s first-ever Mr. Football is one of them) but for now, this season belongs to the Colonels. They seem ready to accept their place in history.