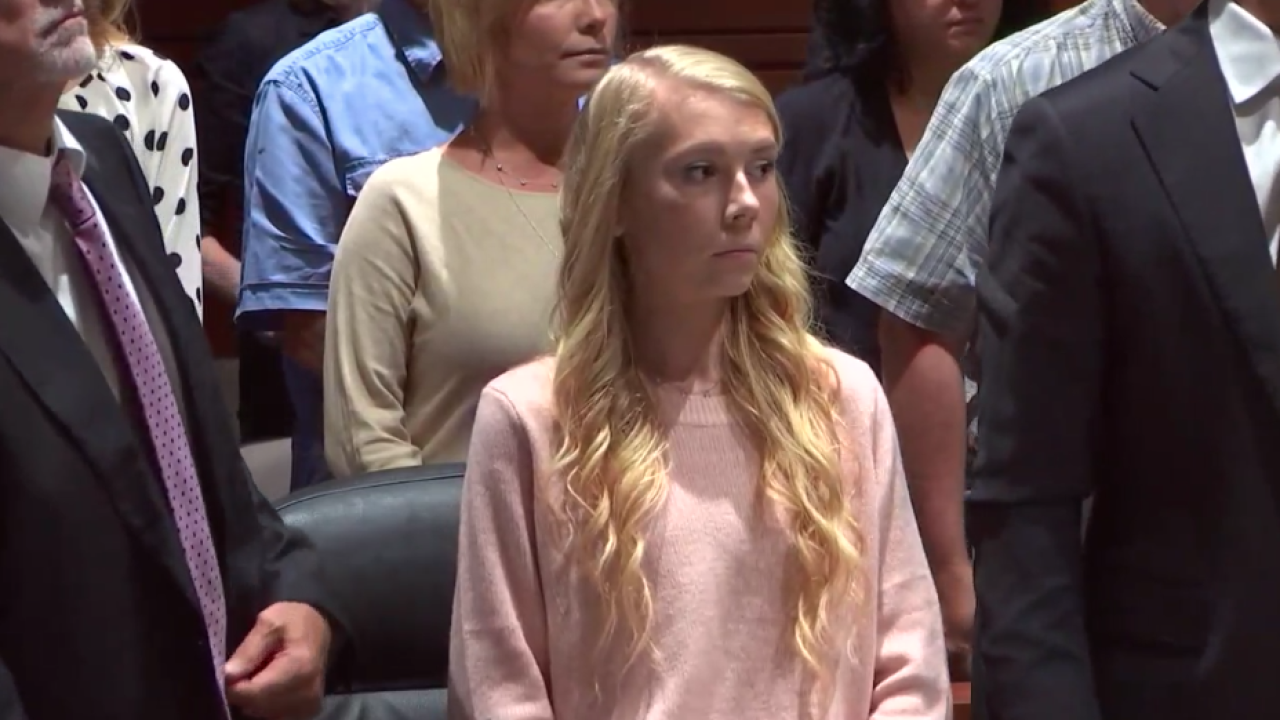 Court TV
Brooke Skylar Richardson stands as the jury enters the courtroom on Sept. 12, 2019 ahead of closing arguments in her Warren County trial.

LEBANON, Ohio — Seven women and five men are now deciding the fate of the Carlisle woman accused of killing her newborn daughter and burying her on the outskirts of her family's property in 2017.

Warren County Prosecutor David Fornshell said he believes Richardson had a fair trial and that "advocacy on both sides was very well done."

Kraft told the jury in her 12-minute closing argument that circumstantial evidence carries as much weight as direct evidence. She said Richardson never wanted her daughter. She never sought prenatal care, and she chose to remain silent about her pregnancy, even when she was in labor.

“Her daughter is born into this world, still nothing … she buries her in the backyard and disposes of her remains and all evidence of her birth," Kraft said.

Defense Attorney Charlie Rittgers told the jury they would "have to not have any doubt of a live birth" in order to hand down a guilty verdict.

Rittgers then used several visual aids — a chart and a box — to show the jury there are several points of reasonable doubt in the case, including Richardson’s statement about the baby being white, the defense’s case that Richardson’s pregnancy was affected by intrauterine growth restriction and that there is no evidence of a live birth.

Rittgers told the jury the prosecution can’t have it both ways; Richardson gets “the benefit of presumption of innocence, not the government,” he said.

Assistant Prosecutor Steven Knippen said the single most insightful piece in the case was five minutes leading up to the baby’s birth.

“So what was her motivation to stay so silent … there’s only one reason — that’s because that child was never going to see the light of day,” Knippen said.

Prosecutors on Sept. 5 showed the jury the two-hour video of the first time Richardson talked to authorities after they received a complaint that Richardson had given birth and buried her newborn.

In the video, a tearful Richardson told authorities she “didn’t really want to have” her baby but she “never meant to hurt her.”

She told authorities she didn’t tell her parents that she was pregnant, but she knew she was far along when she went to Hilltop Obstetrics & Gynecology on April 26, 2017 because she “was really big.”

On the prosecution’s third day of testimony, a forensic pathologist said Richardson’s newborn died as a result of "homicidal violence.”

Dr. Susan Brown, a forensic pathologist with the Montgomery County Coroner’s Office, said all of the evidence — information from the scene, police interview, anthropology report and autopsy report — points to a death caused by homicidal violence, but she can’t determine the exact cause of death.

Prosecutors on Monday showed the jury Richardson's second interview with authorities on July 20, 2017, after Dr. Elizabeth Murray, a forensic anthropologist, said the newborn’s bones had been burned. Murray later recanted that opinion.

Richardson was shocked when authorities asked her if she had burned the body. She was adamant, at first, that she hadn't. Later in the interview, Richardson told investigators she thought she “could cremate her.”

The prosecution also showed text messages between Richardson and her mother, which revealed a shared obsession with Richardson’s appearance, specifically her weight.

Defense: Richardson’s baby was stillborn, cause of death undetermined

Dr. John E. White said the way Richardson described her newborn to authorities — white, not breathing or moving and with no heartbeat — is consistent with a stillbirth.

“In my experience, when you deliver a healthy newborn, they’re almost purple … they have a blue to purple appearance until they let out that first scream,” White said.

White said he also believes Richardson’s pregnancy was affected by intrauterine growth restriction (IUGR), a condition in which the fetus does not grow at a normal rate.

Richardson’s father, Scott Richardson, testified as a character witness. He told the jury about his daughter’s childhood, including the sports she played and her struggle with eating disorders.

“She would never hurt another living being, let alone a baby,” he said.

Professor Alan Hirsch, an expert on criminal interrogations and false confessions, said officers had used “very aggressive” techniques to manipulate Richardson in the July 20 interrogation. Lt. John Faine’s repeated attempts to convince Richardson she would not be punished if she confessed could have propelled her into a false admission, he argued.

A psychologist testified on Wednesday that Richardson has a personality disorder that predisposes her to submit to people in authority. He also said Richardson told him was was sexually abused when she was a girl.

Dr. Stuart Bassman said Richardson has been vulnerable to being taken advantage of since she was 12 years old, when a boy she “looked up to” sexually abused her.

Richardson’s brother, Jackson Richardson, testified as a character witness and discussed her eating disorder. He said he noticed she started monitoring her eating when she was in the eighth grade.

He said he heard her get sick “on a constant basis” but never talked to her about it because he didn’t want to upset her.

Dr. Mark Levaughn, a forensic pathologist, said Wednesday the cause and manner of death of Richardson’s newborn is undetermined.

Levaughn reviewed several documents and examined the newborn’s remains and came to the conclusion that the bones showed no evidence of burning or violent traumatic injury. Levaughn also said there is “absolutely no identifiable evidence of live birth.”