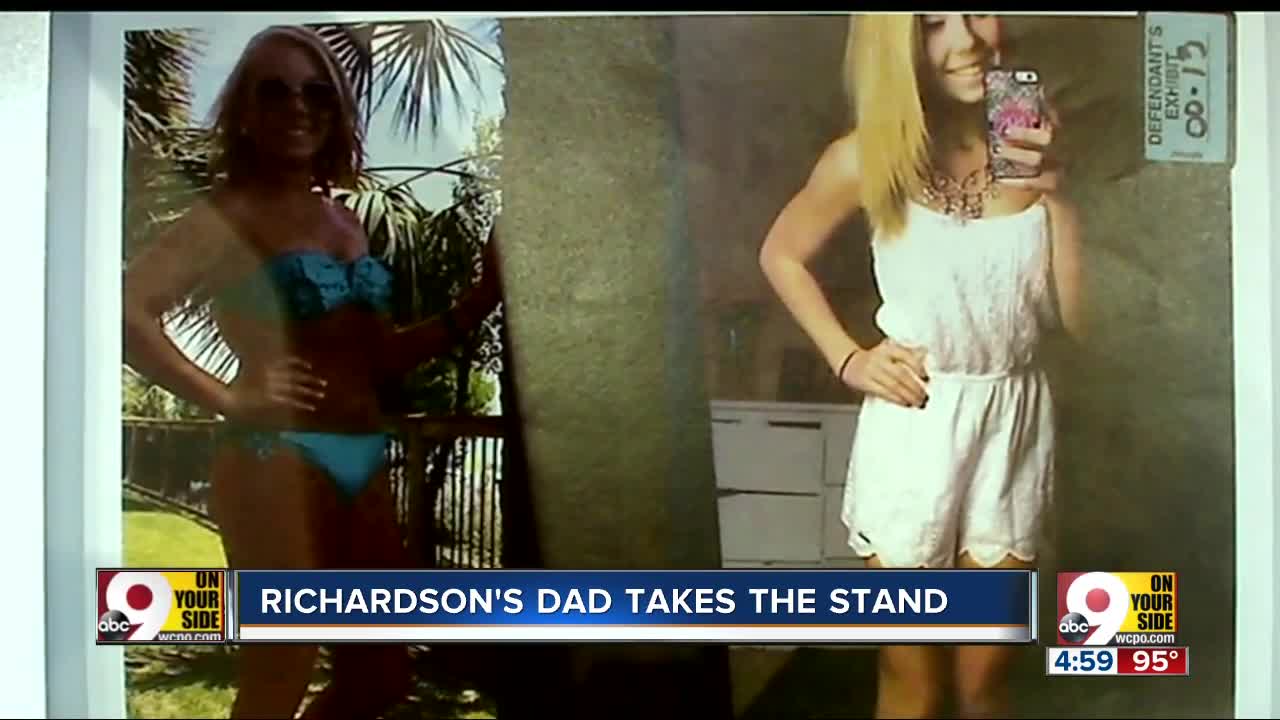 A Cincinnati-area OB-GYN said he believes Brooke Skylar Richardson's newborn daughter was stillborn when Richardson gave birth on a toilet in her family’s Carlisle home in 2017. 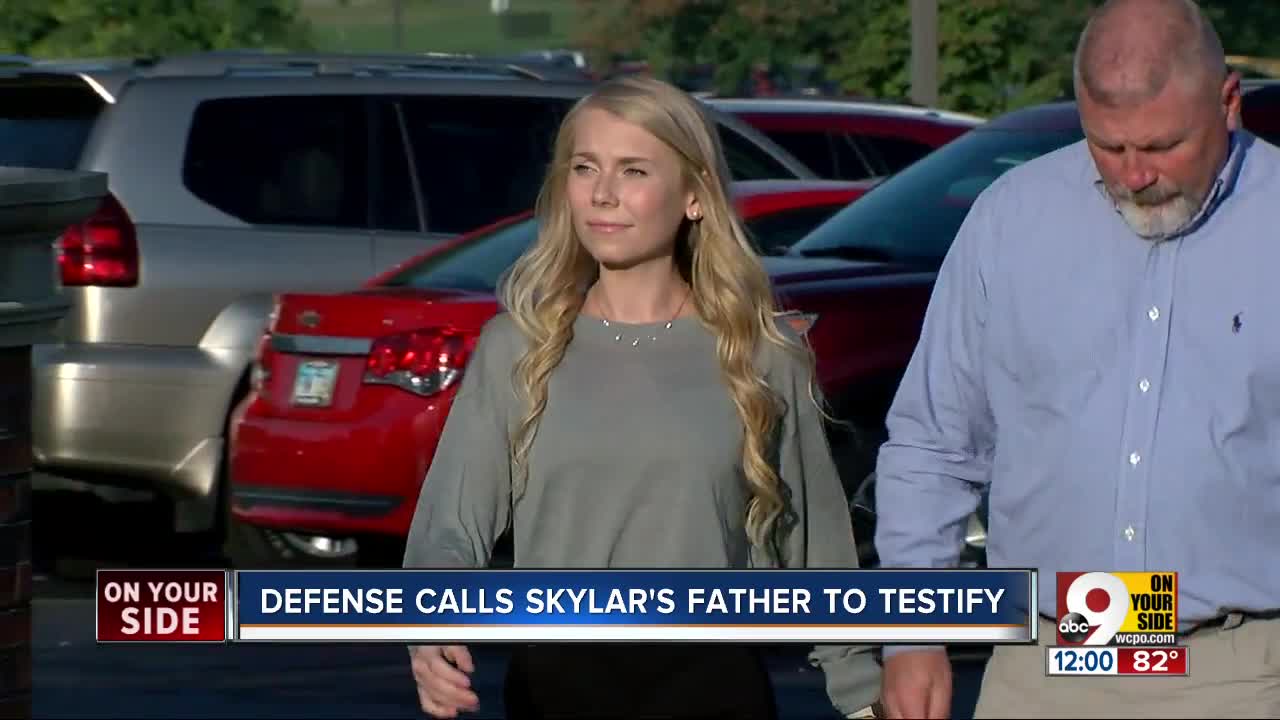 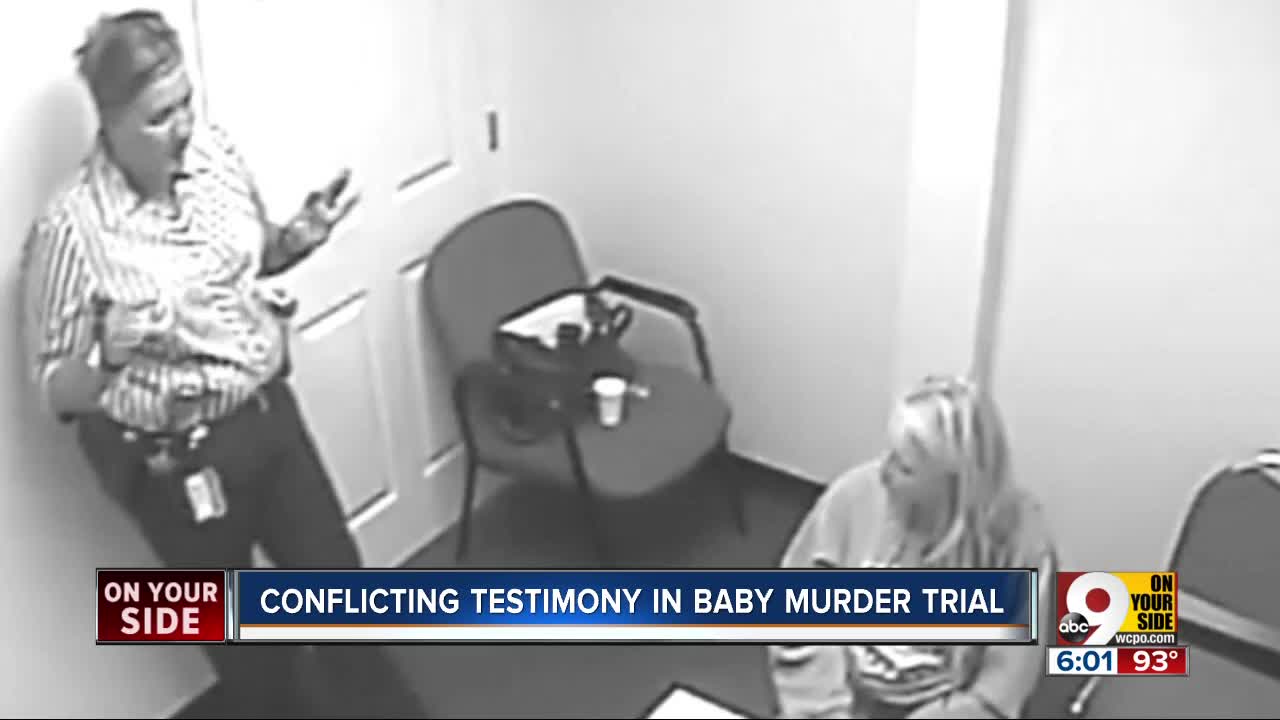 LEBANON, Ohio -- A Cincinnati-area OB-GYN said he believes Brooke Skylar Richardson's newborn daughter was stillborn when Richardson gave birth on a toilet in her family’s Carlisle home in 2017.

Dr. John E. White said the way Richardson described her newborn to authorities — white, not breathing or moving and with no heartbeat — is consistent with a stillbirth.

Richardson, 20, is accused of killing her newborn daughter on May 7, 2017 and burying her in the backyard of her family’s home.

The defense called witnesses to testify on Tuesday; the state rested on Monday after four days of testimony.

White said Richardson described a stillbirth in her interview with authorities on July 14. Richardson told investigators the baby wasn’t breathing, she didn’t see any movement, her eyes were closed and she didn’t notice a heartbeat.

“In my experience, when you deliver a healthy newborn, they’re almost purple … they have a blue to purple appearance until they let out that first scream,” White said.

White said he also believes Richardson’s pregnancy was affected by intrauterine growth restriction (IUGR), a condition in which the fetus does not grow at a normal rate.

Dr. William Andrew measured Richardson’s fundal height (distance from the pubic bone to the top of the uterus) at 32 centimeters on April 26, 2017, which would mean Richardson was about 32 weeks pregnant, according to Andrew.

But White said he believes the baby was conceived sometime between July 24 2016 and Aug. 7 2016, based on what Trey Johnson, the child’s father, told investigators. White said Richardson was 39 weeks pregnant at her April 26 visit, not 32 weeks as Andrew recorded. This would mean her fundal height was lagging by seven centimeters, White said, which could indicate intrauterine growth restriction.

RICHARDSON: Dr. White says he found that Skylar could have had nutrient deficiency when she was pregnant - shows blood work report; now talking about IUGR again and how it is diagnosed - @WCPO

White said he reviewed several records to reach the conclusion that Richardson delivered a stillborn baby, including records from Cincinnati Children’s Hospital Medical Center that discuss Richardson’s history of an eating disorder, Richardson’s high school and middle school records, records from Hilltop Obstetrics and Gynecology, the coroner’s report, Dr. Elizabeth Murray’s anthropology report on the remains, reports on forensic pathology, Richardson’s interviews with authorities, Johnson’s interview with authorities and the DNA report that confirmed Richardson and Johnson were the baby’s parents.

Dr. William "Kim" Brady, an expert in maternal and fetal medicine who testified for the prosecution, said intrauterine growth restriction cannot be determined by fundal height.

On cross examination, Assistant Prosecutor Julie Kraft said White did not exam Richardson, and he only had one measurement of the baby to review.

Kraft pointed to Richardson’s interview with authorities, in which Richardson says the baby made a gurgle noise after she was born.

White maintained his opinion that the baby was stillborn.

“I did not think that was consistent with anything I've seen in 30 years, where a baby gurgles upon its birth,” White said.

Richardson's father, Scott Richardson, has been sitting behind her since the trial started last year, however he testified as a character witness Tuesday despite Ohio’s Separation and Exclusion of Witnesses.

Defense Attorney Mark Krumbein, who is not associated with this case, said judges can make exceptions to that rule at any time. Krumbein said Scott Richardson would be acceptable as a witness because his testimony wouldn’t change based on what he heard from other witnesses.

Richardson’s mother, Kim Richardson, is on the witness list and hasn’t been allowed in the courtroom.

Scott Richardson told the jury about his daughter’s childhood, including the sports she played and her struggle with eating disorders.

“She would never hurt another living being, let alone a baby,” Scott Richardson said.

Judge Donald Oda told the jury that Scott Richardson’s testimony wasn’t meant to garner sympathy, but to help them understand her background.

Asked what the biggest regret in his life is, Scott Richardson said, “Not having an attorney for the second interrogation.”

Prosecutors on Monday played Richardson’s second interview with authorities, in which Richardson said she tried to cremate the baby after repeatedly denying she burned the body.

Richardson’s defense team says investigators planted ideas of cremation in Richardson’s head. The forensic anthropologist who said the bones had been burned later recanted that opinion.

Professor Alan Hirsch, an expert on criminal interrogations and false confessions, testified investigators used a “very aggressive” version of the Reid technique (a method of interrogation in which authorities confront the suspect and attempt to minimize the crime) in Richardson’s July 20 interview.

Hirsch said authorities practiced standard confrontation by telling Richardson they had scientific evidence that the baby was not stillborn. They then used minimization techniques in telling her the purpose of the interrogation was so they could provide a proper burial for the newborn and that they know she didn’t mean to harm the baby, Hirsch said.

“But they went beyond that,” Hirsch said. “They made two statements that I found particularly problematic. Lt. Faine said to her, ‘It’s not as if we’re suddenly going to jump up and judge you and say you’re going to jail.’ And Detective Carter said to her, ‘You just tell us everything and then we can move on.’”

Hirsch said both statements were an “extreme and particularly troubling minimization tactic,” which led Richardson to believe she would receive no punishment if she confessed.

“This can break down an innocent person and lead them to confess,” Hirsch said.

Assistant Prosecutor Steven Knippen said minimization techniques can put a suspect at ease to confess information because it takes the focus out of the consequences.

Prosecutors also showed text messages between Richardson and her mother. The text messages reveal a shared obsession with Richardson’s appearance, specifically her weight.

Data from Richardson’s phone also showed she took a photo of her stomach the afternoon after she gave birth. She took pictures of her stomach on her phone over the next three days.

Detective Christopher Wong also found April 17, 2017 searches on Richardson's phone for "what happens at the gyno when your (sic) pregnant." Richardson's doctor confirmed she was pregnant at an April 26 appointment.

Wong said there could have been more data beyond what he was able to retrieve.

A bailiff on Monday confirmed Richardson's tampering with evidence charge was dropped. Richardson is charged with aggravated murder, manslaughter, endangering children and abuse of a corpse.