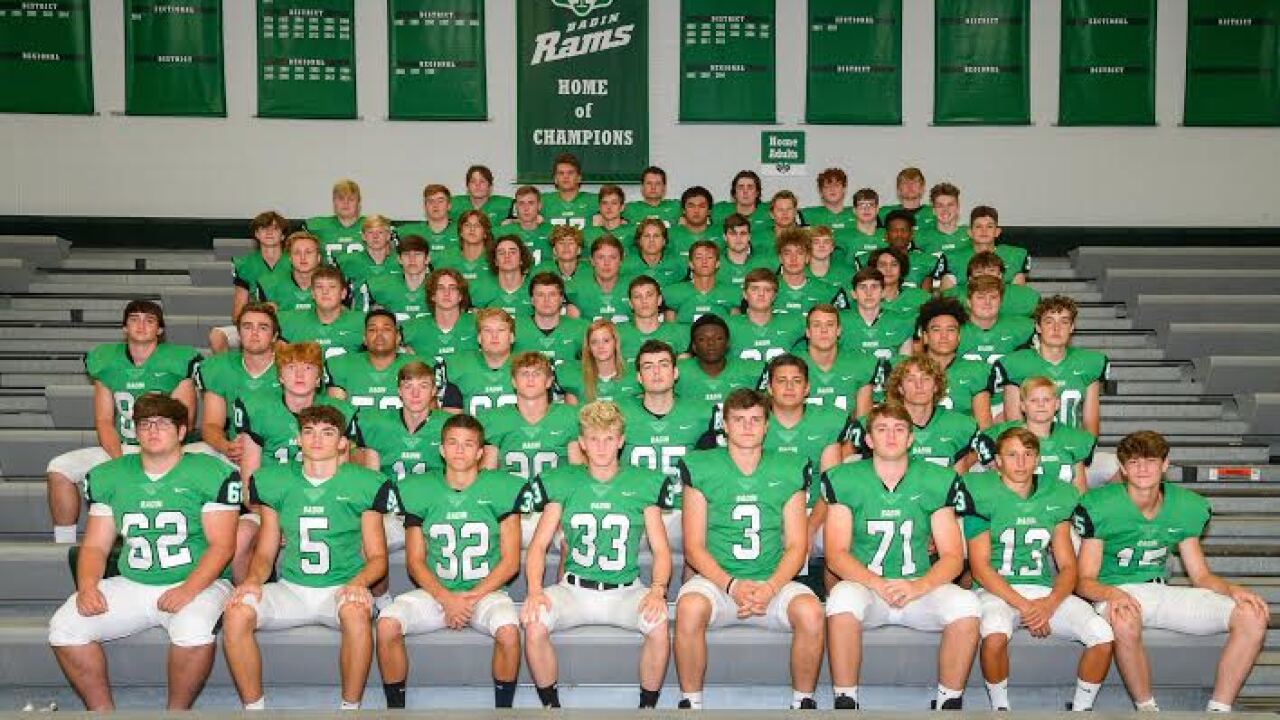 Badin High School
The Badin football team plays Trotwood-Madison in a Division III, Region 12 final at Miamisburg Friday night. The Rams are in the regional final for the eighth time since 1989.

It is the second straight season the two West Side programs will meet in the regional final. Colerain leads the all-time series 8-6. The winner earns a trip to the state semifinals Nov. 29.

Elder is led by several standouts including senior quarterback Matthew Luebbe, who has thrown for 2,538 yards and 23 touchdowns and rushed for 1,322 yards and 14 touchdowns.

His 70-yard touchdown run on 4th-and-2 late in the fourth quarter against St. Xavier last week helped to lift the Panthers to a 28-24 win in the regional semifinal at Mason.

“Those types of plays, those types of things don’t happen too often,” Ramsey said. “I think you are right in Matthew’s case – that’s a play he won’t ever forget. I will tell you Matthew isn’t thinking about that play one bit this week. He is focused.”

Colerain, the 2018 Division I state runner-up, is in its third consecutive regional final and fourth in the past five seasons.

The Cardinals – winners of 10 consecutive games - have prepared for Elder all week as they keep senior standout running back/linebacker Jaylen Thomas in their thoughts and prayers.

Colerain coach Shawn Cutright said it’s been a roller coaster of emotions this week as the school community continues to show its support for Thomas. Cutright said Wednesday Thomas has a goal of making it to the game Friday.

“The vibe around the team is keep our heads up and keep looking forward to the game and play our hearts out for (Jaylen),” senior defensive back/wide receiver Deshawn Pace said.

Colerain is led by several players including junior defensive lineman Dontay Corleone, a University of Cincinnati verbal commit who has 8 ½ sacks.

Pace, a University of Cincinnati verbal commit, has 49 tackles (34 solo), five interceptions and a forced fumble on defense along with six touchdowns on offense and a punt return for a touchdown.

“He’s been great,” Cutright said. “He’s a natural born leader. He takes them on the offensive and defensive sides of the ball and gets them on his back. He just leads by example out there and verbally.”

“These guys are impossible to replace,” Cutright said. “They are just key to our success.”

Colerain or Elder will play Springfield (11-1) or Dublin Coffman (10-2) in the state semifinal Nov. 29 at a location to be determined. The Division I state final is scheduled for Dec. 5 or 6 at Tom Benson Hall of Fame Stadium in Canton.

Harrison (11-1) plays La Salle (10-2) in the Division II, Region 8 final Friday night at Lakota West. This is the first meeting between the programs since the 2017 regional quarterfinal.

This Friday night marks the third time Harrison is in the regional final (2006 and 1988), according to Harrison athletic director Mark Meibers.

Harrison is led by several players including senior quarterback Connor Kinnett, who has thrown for 3,532 yards this season. He entered the OHSAA all-time record list for most passing yards in a season.

“His running was off the charts,” Harrison coach Derek Rehage said. “The most complete game probably in the biggest situation of the year for us honestly.”

Harrison’s wide receiving corps and defensive line has also been very effective during the postseason. Junior Levi Tidwell (1,525 yards receiving) and senior CJ Young (1,038 yards receiving) have been consistent for the offense.

Rehage said the chemistry on the team has been very evident.

"These guys are lifelong friends," Rehage. "Five of our offensive starters have played football since kindergarten. It's been amazing."

"They play together and we play great team defense," Rehage said.

“They just get after people and they prevent people from making plays,” Rehage said.

La Salle or Harrison will play Toledo Central Catholic (12-0) or Lewis Center Olentangy (7-5) in the state semifinal Nov. 29. The state final will be Dec. 5 or 6.

“I liked the focus and execution we had throughout the game but especially at the beginning,” Badin coach Nick Yordy said. “Our kids really executed our game plan in all three phases.”

DeLong has rushed for 1,168 yards and 16 touchdowns for the Rams. Hegemann has 675 yards receiving and 11 touchdowns. He also has three interceptions on defense.

Trotwood-Madison is led by several players including senior defensive back Sammy Anderson, who recently made a verbal commitment to UC.

"The key to Trotwood is to take advantage of the opportunity, finish on offense, stop the big play on defense and win on special teams," Yordy said. "Our message is pretty simple- just play hard and do your job."

Wyoming (12-0) will represent the area again in the Division IV, Region 16 final Saturday when the Cowboys play Germantown Valley View (10-2) at Princeton.

Wyoming is appearing in its fourth consecutive regional final. The Cowboys have won 27 consecutive games after being the 2018 state champion.

Wyoming is led by several players including All-American senior quarterback Evan Prater (UC), who has thrown for 1,626 yards and 21 touchdowns and rushed for 1,308 yards and 22 touchdowns.

“We are excited about getting back to the regional championship,” Wyoming coach Aaron Hancock said. “That’s always been a goal of ours. Our goal is to win to region and we feel like if we win the region we have an opportunity to win a state title. That’s our focus.”