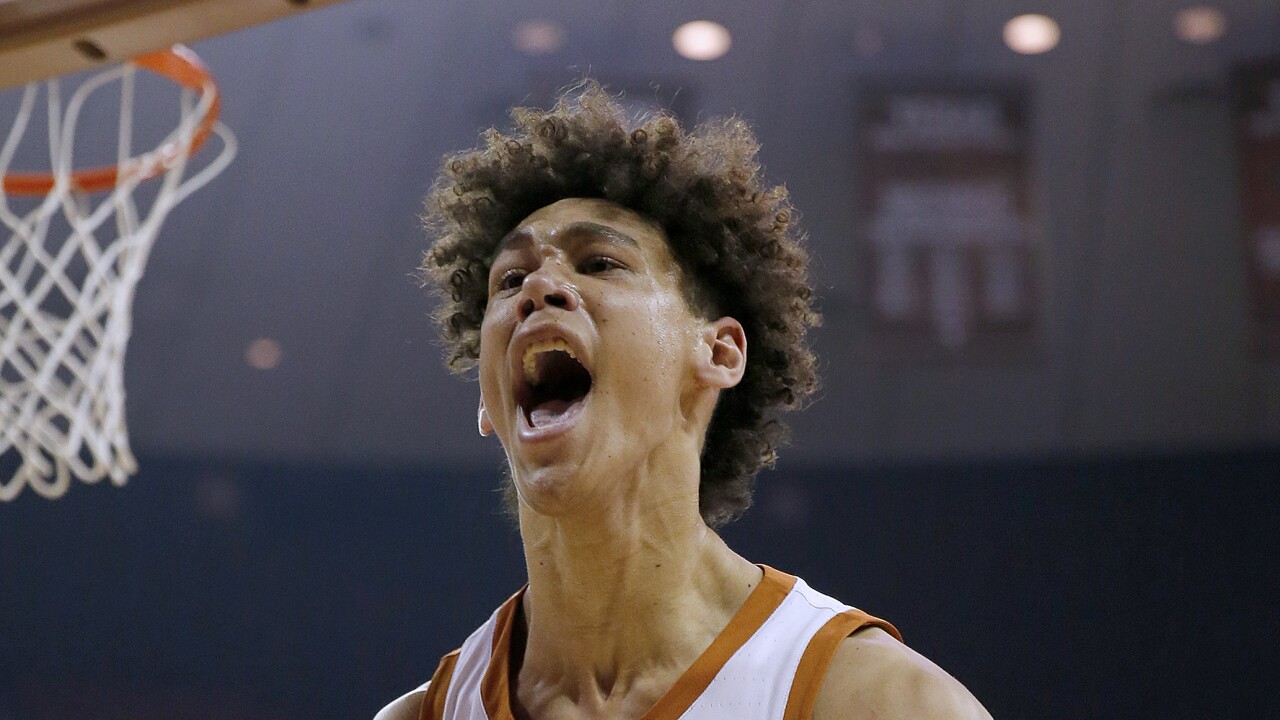 SYCAMORE TOWNSHIP, Ohio — Jaxson Hayes woke up Thursday morning in Austin only to find his first class was canceled.

Then, the real fun began as sat in his dorm room waiting for a test in his second class of the day. His phone received a ton of congratulatory messages as his special announcement trended on social media.

The University of Texas freshman forward Jaxson Hayes, a 2018 Moeller High School graduate, has declared for the NBA Draft and will hire an agent.

"I'm just really excited right now for me, for my family," Hayes told WCPO. "It's just a great time.”

“First, I would like to thank God for giving me the opportunity to play this game I love so much,” Hayes said in a statement from the University of Texas. “Next, I would like to thank my family, the entire Texas coaching staff and my teammates for helping me get to this point in my career. I’m so appreciative of Coach Shaka Smart for pushing me every day to improve and mature, both on the basketball court and as a person. I would also like to thank everyone else who has helped support me. Lastly, thank you to all the Longhorn fans and the people of Cincinnati who have been there cheering me on the whole way.”

The NBA Draft lottery is May 14. The NBA Draft is June 20. Hayes is projected to be a lottery pick. An NBC Sports mock draft projected him to be the No. 6 pick overall.

“I’m happy with where I am projected right now," Hayes told WCPO. "And I feel like I can maybe rise up some throughout the board. So I am just feeling good about it.”

Hayes met with the Texas coaching staff and his parents, Jonathan and Kristi Hayes, this past weekend in Austin to discuss the possibility of entering the NBA Draft. Kristi Hayes said her son wrestled with the decision but knew it was the right timing.

Jaxson Hayes told his parents Monday afternoon that he was going to declare. Jaxson told WCPO he is very grateful for the support back in Cincinnati.

“I’ve gotten so much support from back home," Hayes said. "Just from everybody really. Everyone always texts me after games…just keeping up on me.”

Kristi pulled out a vision board Thursday morning that the family created some years ago where Jaxson said he in his eighth grade year he wanted to be in the NFL or NBA in 10 years.

"I'm just so proud of him and happy for him that his dreams are starting to become realities," Kristi said. "It's been a process. It's involved a huge village and we are blessed to have each stage of the journey lead to where it is now."

Hayes averaged 10.1 points and 5.0 rebounds for the Longhorns (21-16) this season. Hayes missed the NIT Tournament after suffering a knee injury, but there was no structural damage, UT announced. He is expected to make a full recovery.

“I have always dreamed about playing in the NBA,” Hayes said. “Now that I have the chance to realize that dream, I would like to pursue that opportunity."

After Texas won the National Invitation Tournament (NIT) on April 4 at Madison Square Garden, Hayes told the media he was going to make his decision soon.

“I feel like if I were to make the jump, I feel like I’d be good,” Hayes told the Fort Worth Star-Telegram. “I’d just play my game. I have a lot of confidence in myself.”

Hayes would become the first Moeller graduate to play in the NBA, according to Moeller Sports Information Director Steven Albrinck.

"I'm super proud for Jaxson," Moeller coach Carl Kremer told WCPO this morning. "I've never seen anything quite like it in my coaching career. A kid go from being in your high school and fighting for minutes his junior year to 24 months later being in a situation of being a high draft pick in the NBA."

Hayes ranked first in field goal percentage in the Big 12 at 72.8 percent this past season. He was third in the conference in blocked shots (2.2 bpg.).

"I’m really proud of Jaxson for the tremendous attitude he’s demonstrated all year and the unprecedented growth that he’s made,” Texas coach Shaka Smart said. “He’ll always be a part of our Longhorn Basketball family, and we look forward to supporting him in the next steps of his journey.”

The 6-foot-11 forward also considered Kentucky, Xavier, Texas, Georgetown and Butler as his finalists during the fall of his senior year at Moeller.

His commitment to Texas completed a meteoric rise in recruiting the previous spring from his first scholarship offer from Middle Tennessee State to his growth of three inches to 6 feet 10 inches in the summer despite not ever having started a varsity game for the Crusaders prior to his senior season. Hayes also played three years as a wide receiver on the Crusaders' football team.

Hayes was 6-foot-1 and 120 pounds his freshman season, about 6-5 his sophomore season and 6-7 as a backup and varsity contributor during his junior year, Kremer said.

As a senior, Hayes led Moeller to its fourth state basketball title in March 2018. He had 14 points, six rebounds and three blocks in the state final win over Solon in Columbus.

"My phone was just ringing every 10 minutes," Kremer said.

Kremer said he didn't get the sense that Hayes would have the potential to be a one-and-done draft pick. Calipari was in the Brisben Family Education Center during open gym and discussed with Kremer the long-term potential of Hayes during the recruiting process.

In fact, Kremer thought Texas would consider Hayes to have a red-shirt year this past season. But, once Hayes arrived on the Austin campus he had excellent mental and physical growth with the game.

Kremer said he's had lengthy conversations with 10-12 NBA teams since the start of the year regarding Hayes.

"We've always said that since Jaxson was a freshman - that if there is a guy that looks like he would turn into something down the road...he was that guy," Kremer said. Who would've dreamed of the NBA and one-on-done?"

Hayes was the first Moeller basketball player to receive a scholarship offer from Texas and commit to the Longhorns under longtime Crusaders coach Carl Kremer. The Moeller coach started during the 1989-90 season.

In March 2019, Moeller won its fifth state basketball title as the Crusaders completed an undefeated season (29-0).

The area's most recent first-round NBA draft pick was Detroit Pistons guard Luke Kennard, who was the 12th pick overall in 2017. Kennard, a 2015 Franklin graduate, played at Duke.