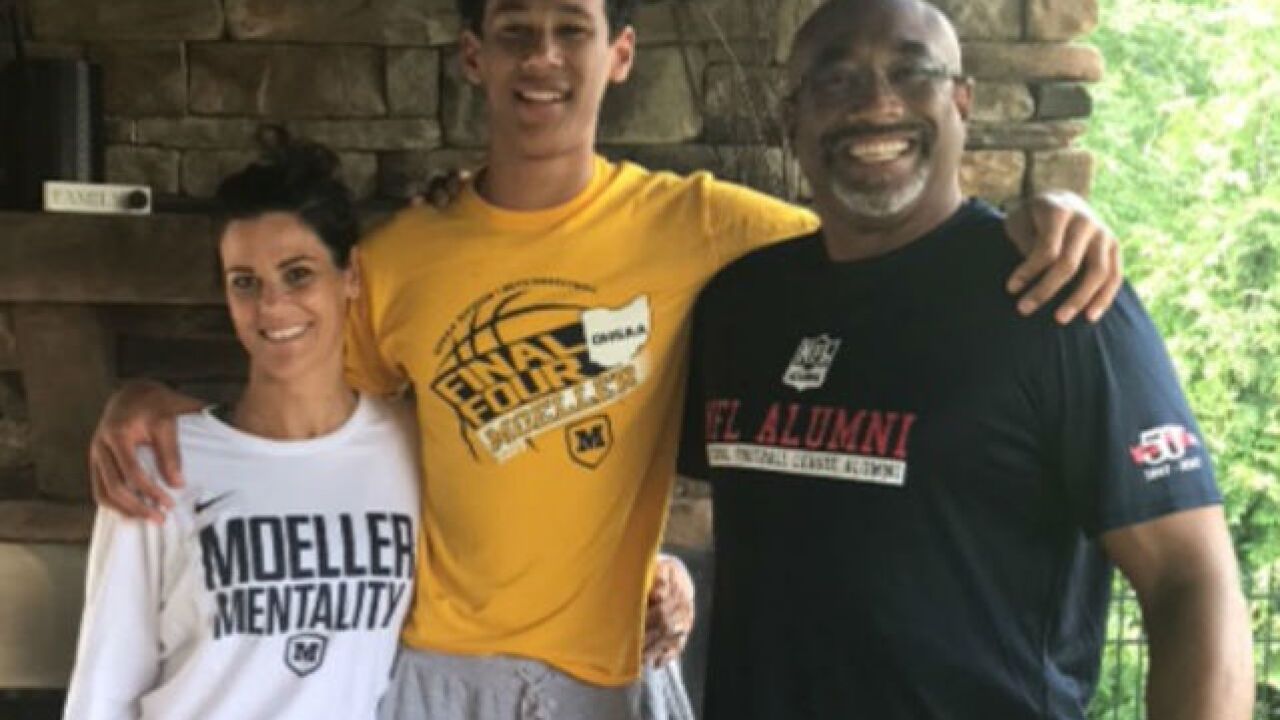 Copyright 2017 Scripps Media, Inc. All rights reserved. This material may not be published, broadcast, rewritten, or redistributed.
<p>Moeller senior forward Jaxson Hayes credits his parents, Jonathan and Kristi Hayes, for setting him on a good foundation in high school athletics at the school.</p>

So a few weeks ago he decided to bus tables at nearby Shooters Bar and Grille in Loveland. The Moeller 6-foot-10 senior forward presumably doesn’t need the extra cash in his family, but he wanted the job.

Jaxson had an inner motivation for the new gig just as he does putting in the extra effort as a student-athlete. He wanted to earn some spending money for the occasional bite to eat and to pay his monthly iPhone data plan.

The 17-year-old is also responsible for sharing in the household chores with his three younger siblings, including Loveland sophomore basketball standout Jillian Hayes who recently earned her first scholarship offer from Northern Kentucky University.

The reality is there are no shortcuts in the Hayes’ household.

A lengthy conversation with Jaxson, and his parents -- Kristi and her husband, longtime Bengals Tight Ends Coach Jonathan Hayes -- also proves that axiom. Jaxson’s genuine smile and affable personality among teammates and visitors says it all.

A self-described gym rat, Jaxson -- named after a football player Jonathan was recruiting while coaching at the University of Oklahoma -- wants to make an impact in a family most commonly known for football.

That’s quite all right with dad. Jaxson and Jonathan have had detailed conversations in the car as they’ve made some campus visits this summer.

“The one thing I keep reminding him and keep grinding into him -- you don’t get to start where you finished,” Jonathan said of last season’s team success.

Jaxson has the genes of two former collegiate All-Americans in his father, Jonathan, a standout at the University of Iowa and 12-year NFL player and Kristi (Kinne), a Drake University basketball standout who averaged more than 50 points her senior year of high school in Iowa.

He also has access to their wisdom. There are no strings attached.

“My dad and my mom are really understanding,” Jaxson said last week. “They wanted me to be the best athlete I could be. They kind of let me decide for myself what I wanted to do.”

'Not in awe of any of this'

Whether it was carrying iPads for the Bengals' coaches last season or receiving advice from Pro-Bowl receiver A.J. Green, Jaxson has grown up around professional athletes. He was a ball boy for the Bengals during training camp when was 7.

“He is not in awe of any of this,” Jonathan said. “The thing he has to understand though is that it’s a process.”

Jaxson played wide receiver at Moeller for three seasons. Yet, at 6-8 and growing this past spring, he decided basketball would be the best path.

“When is the last time you’ve seen a 6-10 player be very successful as a wide receiver?” Jonathan said. “You don’t because of leverage.”

Basketball is Jaxson’s first love. Although he misses football, he knows where his focus can be this summer.

An athletic rim protector and finisher with a guard skill set who can run the floor, Jaxson is one of the most highly recruited area basketball players in the 2018 class despite being in a backup role to Moeller 2017 forward Riley Voss (Cornell) last season.

Voss has reminded him to be a leader along with the importance of the weight room in the offseason. He's told Jaxson to play confidently yet remain humble with success.

"He made some big plays for us last season and stepped up in big atmospheres and I think he'll keep it up this season," Voss said. "I think he's improved more with handling the ball and becoming a more dynamic scorer inside by using his body a little better."

Moeller finished with a school-record 28 wins and was undefeated until the Division I state final last season. The Crusaders have unfinished business. The seniors don’t need a reminder.

“The thing that excites me going into Jaxson’s senior year is this a chance for him to make his mark and learn what it’s like to actually contribute,” Kristi said.

Jaxson has emerged as a go-to player in the post for the Crusaders this summer.

Blessed with nearly a 7-foot-3 wing span, Hayes has been a late bloomer with a late growth spurt. His game has consistently grown each year since he was a 6-foot, 117-pound freshman.

Jaxson considered quitting after his freshman season as a backup on the second team at Moeller.

But Kremer and longtime assistant coach Mike Sussli saw the potential. They remained patient. So did Jaxson and his family.

Jaxson’s abundance of athleticism around the rim during a summer league event at Friars Club and an informal shootaround with his teammates at Moeller draws a visitor’s eye. He makes acrobatic dunks with ease. He plays above the rim naturally.

Jaxson entered this spring without the basketball recruiting rankings because of football. But basketball programs are taking notice. They like what they see.

Kremer saw the progress after three days of team camp this summer.

“He’s at the point where it’s all kind coming together for him physically,” Kremer said.

Jonathan and Kristi joked last week they never had the athleticism their eldest son possesses. Though Kristi was the epitome of a multi-sport athlete in high school by participating in basketball, softball, volleyball, track and swimming, she admits it took a great deal of effort.

Jonathan, whose coached in Cincinnati the past 15 years, admits to being a grinder too. He’s tried to instill the work ethic he’s known in his professional coaching career.

While Jonathan’s voice carries well in a gymnasium, it was Kristi who was Jaxson’s first coach in second grade -- and she continued all the way up until sixth grade at Cincinnati Hills Christian Academy.

“She helped me develop and become the player I am today,” Jaxson said.

It is Kristi who still critiques the basketball side of things. She still says her son is raw. But that's OK. The coach in Kristi watches how he’s being molded on the court.

After her playing career, Kristi coached at Iowa and Oklahoma after being involved with instructional clinics for Pat Summitt at Tennessee. She knows the game.

“I like to say she is tougher than my dad,” Jaxson said. “I might hear my dad more at the games because his voice carries but my mom videotapes my games and you can just hear her criticizing in the thing. But it’s all out of love. I love her.”

It was Kristi who took the phone call from Jaxson’s AAU coach informing the family about his first scholarship offer in May. It seemed only fitting given Kristi’s basketball influence.

“I’m just happy for him that he has positioned himself in a way to do this (in college),” Kristi said. “I’m excited for him because it creates so many opportunities -- for networking, for life, for friendships -- just life lessons.”