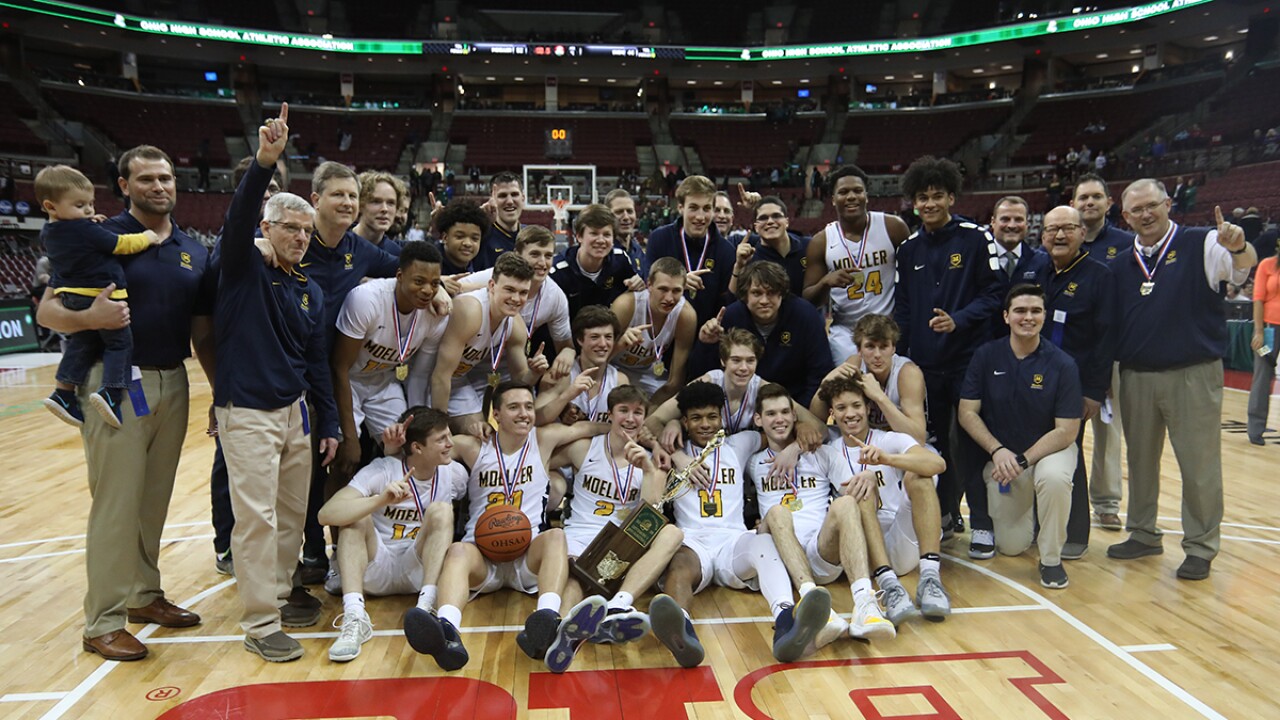 Tony Tribble for Moeller High School
The Moeller basketball team completed an undefeated season with a 52-44 win over St. Vincent-St. Mary in the Division I state final Saturday night in Columbus.

The Crusaders defeated Akron St. Vincent-St. Mary 52-44 in the Division I state final in front of 8,675 at the Schottenstein Center for its second straight championship. Moeller played in its third consecutive state final on Saturday night.

Moeller (29-0) is the first Division I state boys’ basketball champion to be undefeated since Zanesville (26-0) in 1995. The Crusaders are the first D-I boys’ team to win back-to-back titles since Canton McKinley in 2005 and ’06.

“Right after the game it kind of hit me a little bit emotionally,” Moeller coach Carl Kremer said. “I’ve kind of repressed that and didn’t want to think about the historical significance. It really hit me. We’ve got all night to talk about it and live it. I feel humbled and blessed to coach here.”

The last time a Southwest District boys' basketball team went undefeated at the large school level was Dayton Chaminade (27-0 in Class AA) in 1970.

A large-school division boys' basketball team hasn't been undefeated in the Greater Cincinnati area since Hamilton Taft won the Class AA title in 1962 (27-0).

The Cincinnati area has not had a large school division boys’ basketball team repeat as an Ohio state champion since Elder won the Class AAA titles in 1973 and ’74.

On Saturday night, the Crusaders were challenged in a way that hadn’t been most of the season. The game was tied 17 at halftime after the Irish led after the first quarter.

With the Crusaders trailing 27-22 midway through the third quarter, Kremer stepped into the timeout huddle and told his players it was “urgency time.”

Kremer saw in his players’ eyes the response would be immediate. Moeller went on a 9-2 run to end the third quarter.

Senior forward Alec Pfriem’s layup at the 7:21 mark of the fourth quarter gave the Crusaders the lead for good (33-32).

Pfriem had 19 points, eight rebounds and three assists Saturday night in his fourth consecutive trip to the state Final Four.

“It means the world,” Pfriem said. “We fought so hard. Those offseason lifts at 6 a.m., they paid off. We knew we could do something special all the way back in March. I am just happy we could do it together as a team.”

McBride, who played in his third consecutive state final, had 16 points, six rebounds and three assists. Pfriem and McBride were crucial down the stretch.

“They weren’t going to be intimidated by the moment,” Kremer said.

St. Vincent-St. Mary (24-4) had won the past two Division II state titles but moved up to Division I because of the Ohio High School Athletic Association competitive balance alignment.

Moeller defeated the visiting Irish 99-62 in early December. The teams will play in the regular season in Akron next season.