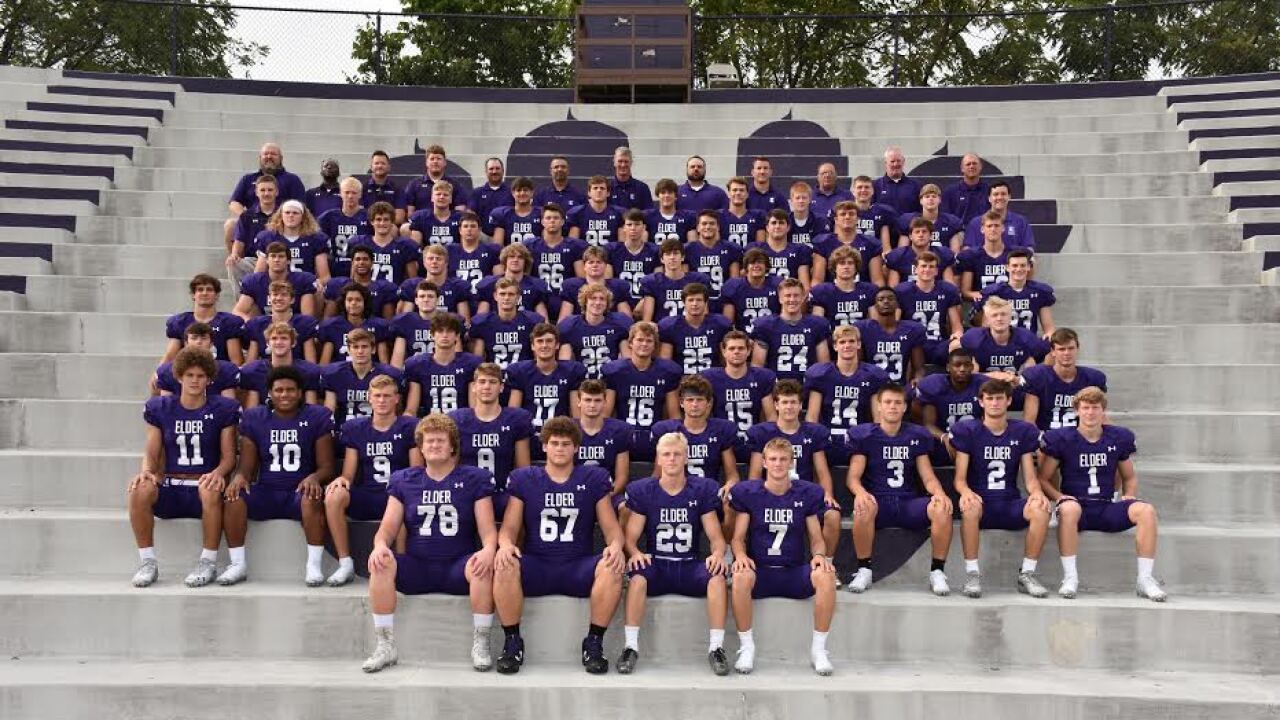 Provided/Elder High School Athletics
The Elder football team improved to 3-0 with a 60-54 win over a very talented Clearwater Academy team Friday night at The Pit.

CINCINNATI — Doug Ramsey has been the Elder head coach for 258 games since 1997, but none were more unique than Friday night.

“It was honestly the craziest game I have ever been a part of,” Ramsey told WCPO Saturday morning. “We knew there would be a lot of points scored but 60-54 is unbelievable.”

It was the most points for Elder since Sept. 10, 2004 when the Panthers defeated Western Hills 64-6.

Clearwater Academy was led by several talented players, including Ludov Choquette who had 14 carries for 296 yards and four touchdowns. Clemson commit Ajou Ajou had three receptions for 75 yards.

“Their offensive skill players were extremely talented and they had a big offensive line,” Doug Ramsey said. “Just like last week, finding a way to win when you are down with four minutes to go says a lot about your team.”

Winning continues for Wyoming: Wyoming extended its regular-season winning streak to 34 games - tops among any team in the state - with a 10-7 win at Mount Healthy.
Wyoming, the 2018 Division IV state champion, has won 17 consecutive games going back to last season.
Wyoming senior quarterback Evan Prater rushed for 121 yards and threw a touchdown pass as the UC commit led the Cowboys (3-0) on the game-winning drive.
Senior kicker AJ Washienko kicked a game-winning field goal at the buzzer to lift the Cowboys, a Division IV team, past Division III Mount Healthy (1-2).
“AJ does a great job of kicking for us,” Wyoming coach Aaron Hancock said. “He’s been waiting for this moment and crushed it.”
Washienko was one of two area kickers with game-winning field goals Friday night.

Undefeated club: Fairfield is 3-0 for the first time since 2015 after the Indians defeated host Middletown 47-7.
Fairfield senior running back JuTahn McClain (Kentucky commit) rushed 13 times for 153 yards and two touchdowns for the Indians. He also had three receptions for 46 yards.
Senior quarterback Sawiaha Ellis (Toledo) was 10 of 12 passing for 158 yards and a touchdown. He also rushed for three touchdowns.

Great start: Turpin is 3-0 for the first time since 2016 after a 62-13 win over Troy. Senior quaterback Justin Silverstein was 12 of 17 passing for 227 yards and four touchdowns, including an 89-yard TD run, according to Turpin coach Kent McCullough. "Justin Silverstein has been playing lights out," McCullough said. Senior running back Reece Evans rushed for three touchdowns.

Milestone for Kiner: Roger Bacon junior running back Corey Kiner broke the school’s all-time points record with a touchdown and two-point conversion during a 45-6 win at Woodward. Kiner, rated the nation's No. 6 running back in the 2021 class by 247Sports, recorded his 322nd point which passed Jerrett Dean’s 318 points. Dean is a 1999 graduate.

Warriors win: Winton Woods won its 12th consecutive regular-season game in a 30-7 victory over visiting Upper Arlington. The Warriors had 372 yards of total offense. Senior running back Miyan Williams had 12 carries for 183 yards and two touchdowns. Williams, an Iowa State commit, has 5,222 rushing yards for his career.
Quarterback Mi’Chale Wingfield was 9 of 15 passing for 134 yards and a touchdown. Senior wide receiver Demeer Blankumsee (Toledo commit) had five receptions for 71 yards and a touchdown.
Linebacker Cameron Sanders had a game-high 14 tackles while Defensive lineman Malcolm Bryant had 10 tackles.

Fredrick honored: Winton Woods honored the late Charlie Fredrick at halftime Friday night. Fredrick, a Newport Catholic graduate and former Notre Dame football player, died in March. He is in the Ohio Athletic Directors Hall of Fame and the first inductee into the Winton Woods Hall of Fame. He is also a member Newport Central Catholic Hall of Fame along with the prestigious LaRosa's High School Hall of Fame. The stadium is named in his honor.
"Winton Woods was absolutely first class," said Joe Fredrick, Charlie's son. "From Principal Eric Martin to AD Dave Lumpkin, the whole school board and Superintendent Anthony Smith. Great, great folks and an awesome, awesome night."

Big win for Big Moe: Moeller defeated Lexington Lafayette 68-7 Friday night at Princeton for the Crusaders' first of the season and for head coach Todd Naumann. It was the first time Moeller scored 68 points since the Crusaders won 68-7 over Hamilton in 2011 at Lockland, according to Moeller sports information director Steve Albrinck. Moeller (1-2) plays at Winton Woods (3-0) Sept. 20. "I think we have been working hard," Naumann said Saturday morning. "The scoreboard doesn't always accurately reflect the work the kids are doing. We played two outstanding football teams (Cathedral and Trinity) to start the year and didn't get it done; they were good learning experiences. There has been no panic and on our team. We have a plan and have to keep working at it."

Bombers shine in Indiana: Senior quarterback Matthe Rueve was 13 of 14 passing for 258 yards and two touchdowns in St. Xavier's 37-7 win over Penn near South Bend. Junior wide receiver Liam Clifford had five receptions for 185 yards and a touchdown for the Bombers (3-0).

Memorable night: Junior Seth Greene had 16 carries for 182 yards and four touchdowns to lift Mariemont past Shroder 41-6. It was the first time a Mariemont player scored four touchdowns during Kurry Commins' coaching tenture which goes back to 2012.