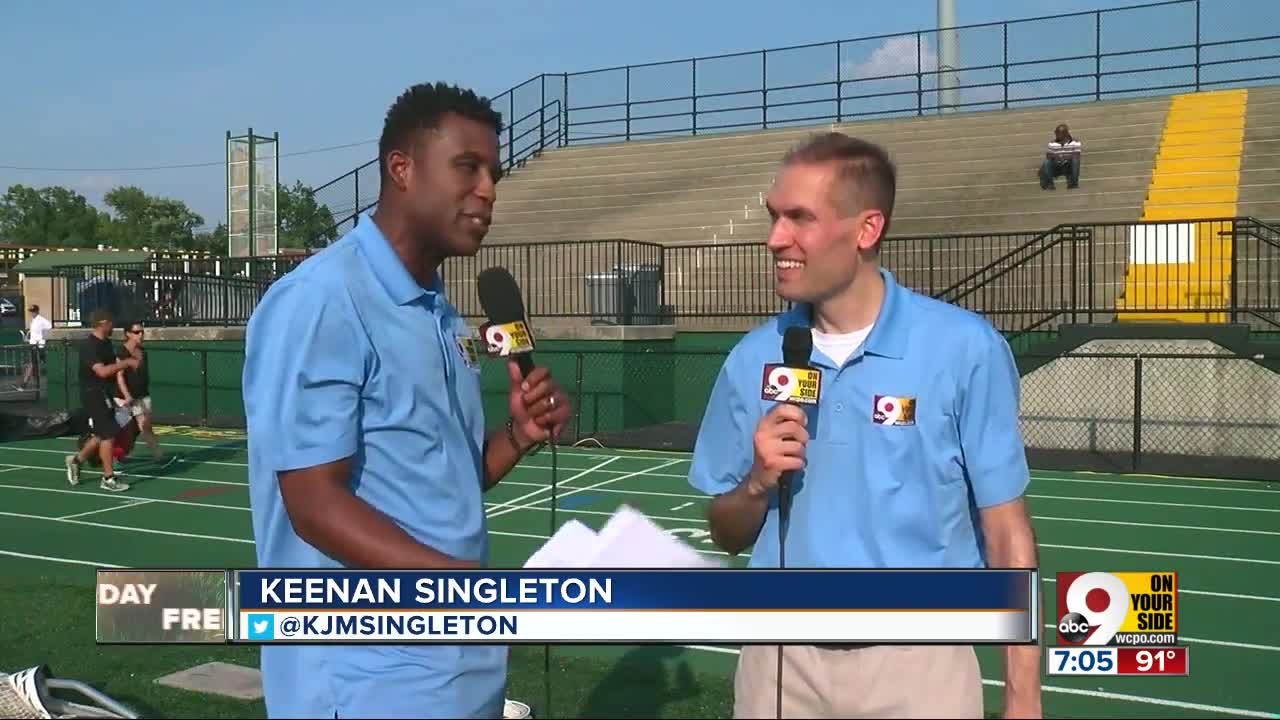 SYCAMORE TOWNSHIP, Ohio — Jack Ferron hid his nerves as he waited on the Sycamore sideline with less a minute remaining Friday night.

The senior kicker heard the entire team tell him to be ready. Ferron did his best to stay focused though the anticipation was thick as the humidity on this early September night.

The Aviators had the ball at the 50-yard line with the game tied but were without any timeouts at Coach Bud Acus Alumni Field. Overtime looked like a good possibility.

Yet, Sycamore’s offense quickly moved the chains and managed to save one second for Ferron, who put the ball through the uprights 35 yards away to give the Aviators a 16-13 win over visiting Princeton in the first game of the Greater Miami Conference schedule.

“It was incredible,” Ferron said. “It was like nothing I’ve ever felt. I played football for 12 years and this is probably the best moment of my football career.”

Princeton led 13-6 until 1:43 left in the fourth quarter when a botched punt snap allowed sophomore William Ingle to recover the ball and score from two yards away. Ferron’s extra point tied the game - paving the way for an improbable finish for the Aviators.

“After they muffed the punt I just knew we had to do something to win the game,” Sycamore junior quarterback Andrew Fehr said. “It was too good of an opportunity to pass up. We just had to give it our all.”

Princeton punted on its next possession on fourth down with one minute left to give Sycamore another opportunity.

Fehr had no doubt Ferron would be clutch in the biggest moment of the game.

“One hundred percent,” Fehr said. “I trust Jack in that situation ten times out of ten. He’s a great kicker. I knew he would make it.”

For the second straight week, Sycamore (3-0, 1-0 GMC) rallied to win in the second half. The Aviators trailed Kings 10-0 last week before outscoring the Knights 31-7 in the middle quarters.

“I’ve been saying since the start of this season that there is something about this team that is unique, something that is special,” Dattilo said. “You know we were not at our best and a lot of that had to do with them (Princeton). They are loaded with talent. But, we just kept playing and kept playing. And we got a chance at the end and Jack Ferron drove it through.”

Dattilo earned his 94th win at Sycamore and became the all-time wins leader within the program. Dattilo, who is in his 14th season at Sycamore, passed Acus who attended Friday’s game. Dattilo is 111-63 overall including 94-49 at Sycamore.

“It’s exciting,” Dattilo said. “It’s pretty cool. It means I’ve coached a long time. It was going to happen at some time but to happen tonight was really special especially in that way it happened.”

Dattilo said Friday night’s win was extra rewarding given the major college recruits that Princeton has this season.

“This is with all respect to Princeton because of them that’s what makes this a big win,” Dattilo said. “It’s not a Week 3, it’s not a late-finish win. It’s a Week 3 win over a star-studded team. And we don’t have a Division I player on our team but we’ve got really good high school players.”

The game was scoreless at halftime and the Aviators struck in the third quarter when senior running back Dahmear Celestine scored on a 7-yard run. Ferron missed the extra point but vowed to keep his focus the remainder of the game.

Princeton (2-1, 0-1 GMC) followed up with a very successful drive when senior quarterback MyJaden Horton's 34-yard run set up a 1-yard rushing score to give the Vikings a 7-6 lead with 6:51 left in the third quarter.

Princeton went up 13-6 when Horton junior DeAngelo Foster for an 11-yard touchdown pass connection at the 10:40 mark of the fourth quarter. But, the Aviators hung tough on both sides of the ball.

Princeton coach Mike Daniels told his team after the game that the little things matter and to keep pushing. Princeton was penalized 12 times for 90 yards.

"'Learn from the mistakes and move forward," Daniels said. "Colerain this week."

Sycamore senior linebacker Nick Stephenson had a team-high 10 tackles for the Aviators, who defeated Princeton for a fourth consecutive meeting going back to 2015.

“This is a really big game,” Sycamore senior wide receiver Jordan McConnell said. “It was a hyped up game. This win means a lot to us but we still have more work to do.”