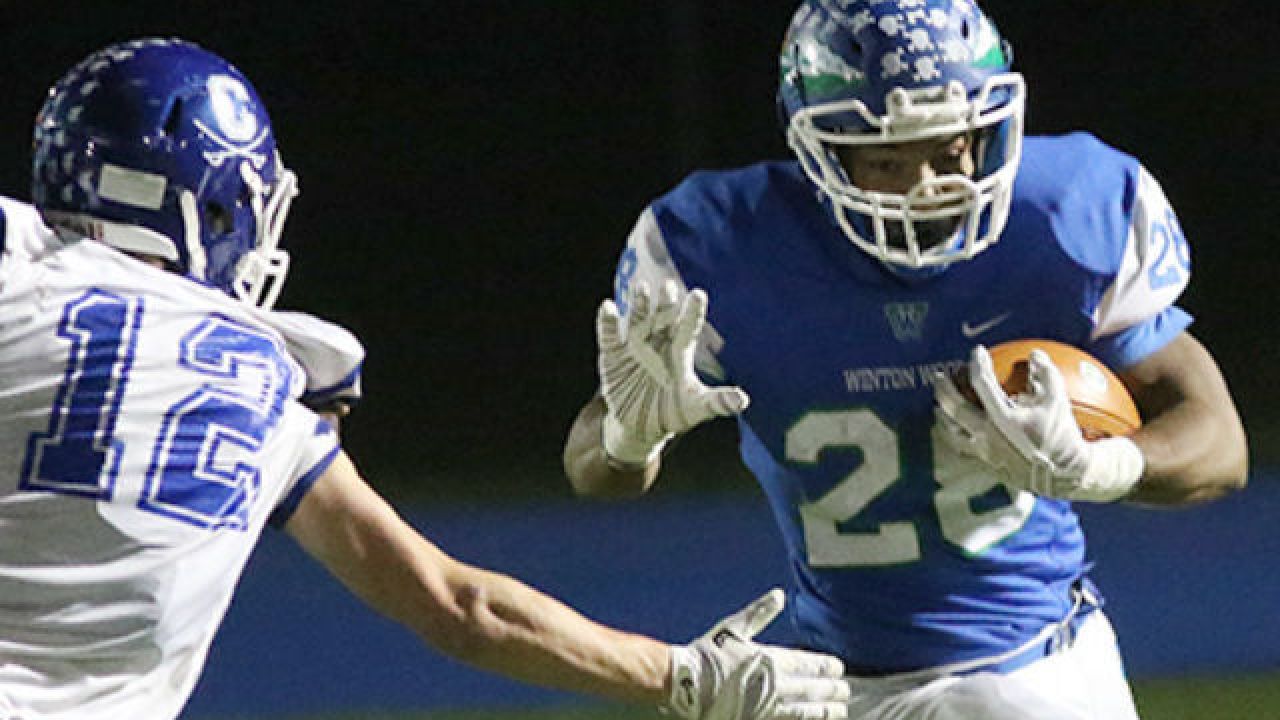 CINCINNATI — The high school football season is right around the corner. And we simply can’t wait any longer to start the conversation about this fall.

The players are listed in alphabetical order:

David Afari, Lakota West: The senior running back has offers from UC, Louisville, Miami University, Western Michigan, Toledo and Youngstown State. He rushed for 1,109 yards and seven touchdowns in 2017. He rushed for 639 yards and a touchdown in 2018.

Michael Bess, Colerain: The junior linebacker was second team all-GMC in 2018. He had 81 tackles including two sacks along with two fumble recoveries and an interception.

Josh Bryant, Middletown: The junior running back was first team all-GMC. He rushed for 1,033 yards and six touchdowns.

Liam Clifford, St. Xavier: The junior is being recruited as an athlete. He has offers that include UC, Duke, Michigan, Pittsburgh and Toledo, according to 247Sports.

De’Zion Coleman, Hughes: The senior running back/defensive back had 863 yards rushing and seven touchdowns. He had 19 receptions for 227 yards and 475 yards on returns. He also had 61 tackles on defense.

Mason DeGennaro, Lebanon: The junior linebacker had 109 tackles in 2018. He also had an interception, 2 ½ sacks and two forced fumbles.

Sawiaha Ellis, Fairfield: The senior is being recruited as a safety and an outside linebacker. He has offers that include Kent State, Bowling Green, Eastern Michigan, Toledo, Western Michigan and Ball State. He will be the Indians’ quarterback this season, according to coach Jason Krause. Schools from the Big Ten and Atlantic Coast Conference also have interest.

Brady Evans, Wilmington: The senior quarterback was Division III second-team all-district. He threw for 2,500 yards and 25 touchdowns in the regular season.

Cole Fisher, CHCA: The senior quarterback threw for 2,912 yards and 27 touchdowns in the regular season. He had 469 yards rushing and seven touchdowns.

Jack Haglage, Mason: The senior linebacker had 57 tackles (35 solo), including a sack. He was first team all-GMC. He has scholarship offers from Eastern Illinois and Indiana State. He received an opportunity from the United States Naval Academy this week.

Liam Hamill, Loveland: The senior running back rushed for 1,272 yards and 12 touchdowns in 2018. He was first team all-Eastern Cincinnati Conference.

Darrion Henry, Princeton: The senior defensive end is ranked the state’s No. 2 player overall in the 2020 class by 247 Sports. He has offers from the likes of Ohio State, Oklahoma, Alabama, Georgia, Michigan, Clemson, Notre Dame, UC, LSU, Louisville, Tennessee, Penn State, Pittsburgh and several others. He recently named his top six schools.

Daniel Ingram, Woodward: The senior threw for 1,160 yards and nine touchdowns and rushed for 944 yards and 17 yards. He was a Cincinnati Metro Athletic Conference player of the year.

Juan Jarrett, Princeton: The senior outside linebacker has offers that include Kansas, Georgia Tech and Akron.

Paris Johnson, Princeton: The senior offensive tackle is verbally committed to Ohio State. He is committed to the 2020 All-American Bowl. He is rated Ohio’s No. 1 player in the 2020 class by 247Sports.

Connor Kinnett, Harrison: The senior quarterback was the Southwest Ohio Conference Offensive Player of the Year in 2018. He threw for 2,587 yards and 24 touchdowns. He rushed for 261 yards and six touchdowns.

Brandon Lanier, Mount Healthy: The senior quarterback/running back had 662 rushing yards and 10 touchdowns. He is also a middle linebacker. He has offers that include Austin Peay and Tiffin.

Luke Lundberg, Indian Hill: The senior kicker was first team all-CHL. He holds the school record with a 48-yard field goal and has received interest from Big Ten and Big 12 programs.

Luke Mattia, Hamilton: The senior linebacker was first team all-GMC. He had 90 tackles, a forced fumble and a fumble recovery. He had double digit tackles in six games.

JuTahn McClain, Fairfield: The senior running back was a Division I first team all-state selection. He was the Greater Miami Conference Offensive Player of the Year. He rushed for 1,754 yards and 25 touchdowns. He had 24 receptions for 416 yards and five touchdowns. He had six kickoff returns for 160 yards and a touchdown. He has offers from Ohio State, Michigan, Notre Dame, Maryland, Indiana, Nebraska, UC, Kentucky, Penn State, Rutgers, Louisville, Pittsburgh, Purdue and West Virginia. Clemson, Alabama and Auburn have shown interest.

Ross Parrish, Anderson: The senior tight end has offers that include Indiana and Akron.

Cam Porter, La Salle: The senior running back is verbally committed to Northwestern. He rushed for 924 yards and nine touchdowns as a sophomore.

Evan Prater, Wyoming: The senior quarterback verbally committed to UC May 2. He also had offers that include Michigan State, University of Miami, Syracuse, Kansas, Oklahoma State, Purdue, Indiana, Duke, Pittsburgh, Georgia Tech, Miami University and several others. He threw for 2,181 yards and 28 touchdowns and rushed for 1,788 yards and 32 touchdowns as a junior in helping the Cowboys (15-0) win the Division IV state title.

Paul Rodriguez, Mason: The 6-foot-5 ½, 310-pound junior offensive tackle was first-team all-GMC. He is one of the state’s top offensive linemen in the 2021 class. He has offers from Iowa State, Bowling Green, Toledo and Kent State.

Jake Seibert, La Salle: The senior kicker has offers that include Michigan State, UCLA, Akron and Temple. He also has opportunities at Penn and Air Force. He has interest from Arizona, Penn State, Ohio State and many others. He was 6 of 6 on field goals including a 46-yarder. He was 16 of 17 on extra points.

Brayden Sipple, Blanchester: The junior quarterback was Division V first-team all-district in 2018. He has school records for passing yards and touchdown passes. He is also a standout basketball player.

Keyshawn Stephens, Hamilton: The junior running back was first team all-GMC in 2018. He rushed for 1,247 yards and 10 touchdowns. He also played “Wildcat” quarterback. He broke the school’s single game rushing record with 293 yards against Anderson.

Jaheim Thomas, Princeton: The senior linebacker has offers that include Michigan, Alabama, Michigan State, Tennessee, Georgia, Ohio State, Notre Dame, Wisconsin and Mid-American Conference programs. He is ranked the state’s No. 4 player in the 2020 class by the 247 Sports Composite. He is ranked the nation’s No. 21 outside linebacker by the 247 Sports Composite.

Joe Toepfer, Moeller: The senior defensive lineman was second-team all-GCL South. He had 67 tackles including 4 ½ sacks.

Matthew Warden, Summit Country Day: The senior center/defensive tackle had 4 1/2 sacks, three forced fumbles and a fumble recovery in 2018. He was first team all-Miami Valley Conference Scarlet division. He was a Division V first team all-district selection on defense and special mention all-state. He earned a perfect score of 36 on the ACT college entrance exam.

Miyan Williams, Winton Woods: The senior running back has offers that include Kansas, Purdue, UC, Minnesota, Michigan, Maryland, Iowa State, Boston College, Missouri and Toledo. He rushed for 2,824 yards and 38 touchdowns. He finished the 2018 season as No. 19 on the OHSAA’s single-season rushing yards list. His 430 rushing yards in the first round of the Division II playoffs against Lewis Center Olentangy was the most rushing yards by a Greater Cincinnati player in an Ohio high school postseason game (since 1972). He was the 2018 Ohio Mr. Football runner-up.