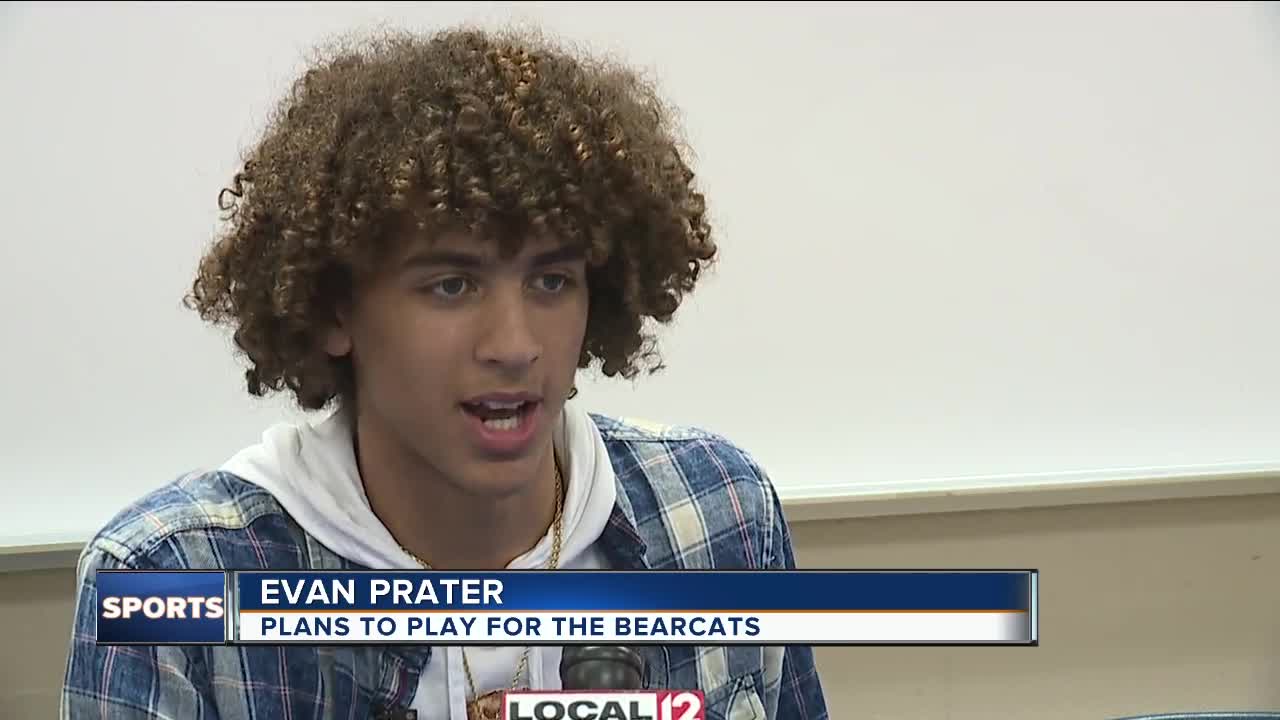 The University of Cincinnati football program received a significant verbal commitment Thursday when Wyoming High School 2020 quarterback gave a pledge to the Bearcats. "I see it as a good fit for me especially being close to home," Prater said. "It's somewhere I could see myself." Prater, who is 6-foot-5 and 190 pounds, is rated the state’s No. 8 player overall in the 2020 class by 247 Sports and the nation’s No. 10 dual-threat quarterback.

WYOMING, Ohio — Wyoming 2020 quarterback Evan Prater announced Thursday afternoon he has verbally committed to play at the University of Cincinnati.

"I see it as a good fit for me especially being close to home," Prater said. "It's somewhere I could see myself."

Prater, rated a three-star recruit by 247 Sports, is the sixth verbal commitment for the Bearcats in the 2020 class. He is considered an early candidate for Ohio Mr. Football. The Cincinnati area has not had an Ohio Mr. Football since Norwood's Marc Edwards in 1992.

"I'm extremely proud of Evan," Wyoming coach Aaron Hancock said. "Evan is a tremendous kid who works extremely hard. He is a great leader for our program and he's a very talented football but he's also just a tremendous kid. I couldn't think of anybody else to represent the program really on a national level. The kid is a national prospect and pretty special football player to have. We are very excited about his decision."

Prater told reporters he made the decision to attend UC a few weeks ago. He plans to study business.

"Just the whole atmosphere down there at UC and the tradition that he (head coach Luke Fickell) is creating," Prater said. "The great season and the success that he's had - it just really stuck with me."

Prater visited Michigan State, Louisville, Purdue and the University of Miami. But, he felt the most comfortable at UC.

“He reminds me of a hybrid version of Braxton Miller and Terrelle Pryor,” ScoutingOhio.com Director Mark Porter said. “He is an incredible athlete who could probably play multiple positions at the highest level. He has a very strong arm and is a good passer.”

Prater threw for 2,181 yards and 28 touchdowns and rushed for 1,788 yards and 32 touchdowns as a junior in helping the Cowboys (15-0) win the Division IV state title in December in Canton.

"Every time he touches the ball great things can happen," Hancock said. "He's a special talent. We are very excited for him."

Prater, the younger brother of former Ohio State wide receiver Garyn Prater, rushed for three touchdowns and threw for two in Wyoming’s 42-14 win over Girard in the state final. He finished with 35 carries for 242 yards and threw for 149 yards. Garyn Prater announced that he will transfer to UC.

It was the second state football title for Wyoming and the first since 1977 when the Cowboys won the Class AA title (11-0) in Akron.

Wyoming, which opens the season at Columbus Academy on Aug. 30, is 27-1 with Prater as the starting quarterback the past two seasons. Wyoming opens at home Sept. 6 against Taft.

“He is getting better by the weeks,” Porter said. “He is probably the top quarterback coming out of Ohio arguably the last couple of seasons.”

He averaged 17.9 points, 7.7 rebounds, 2.8 assists, 1.9 blocks and 1.7 steals this past season for Wyoming (22-2). Wright State offered him a scholarship in basketball earlier in his school career.