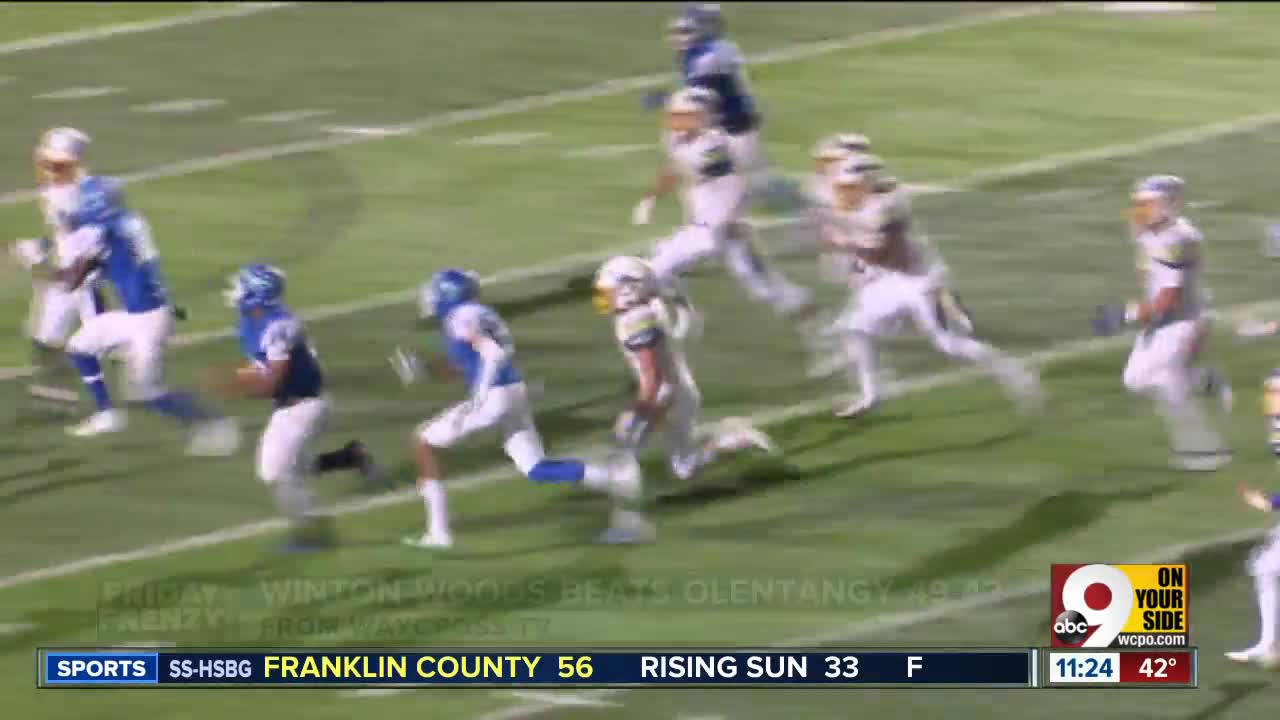 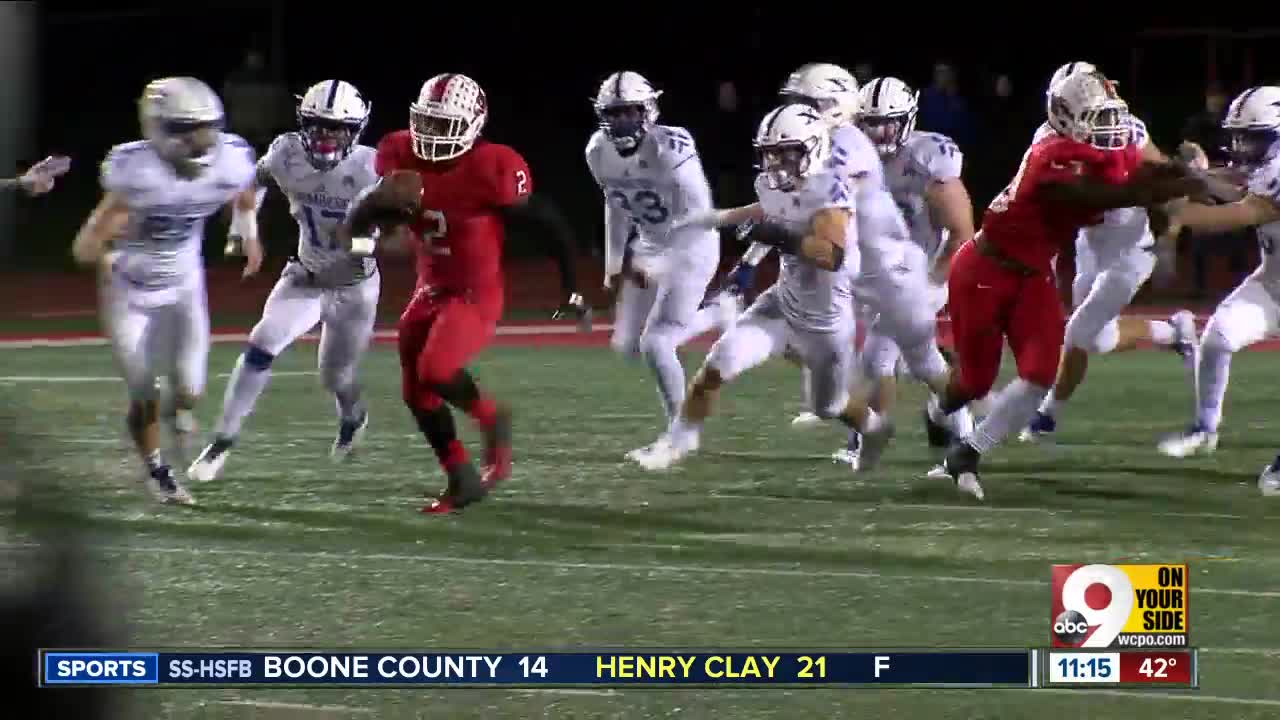 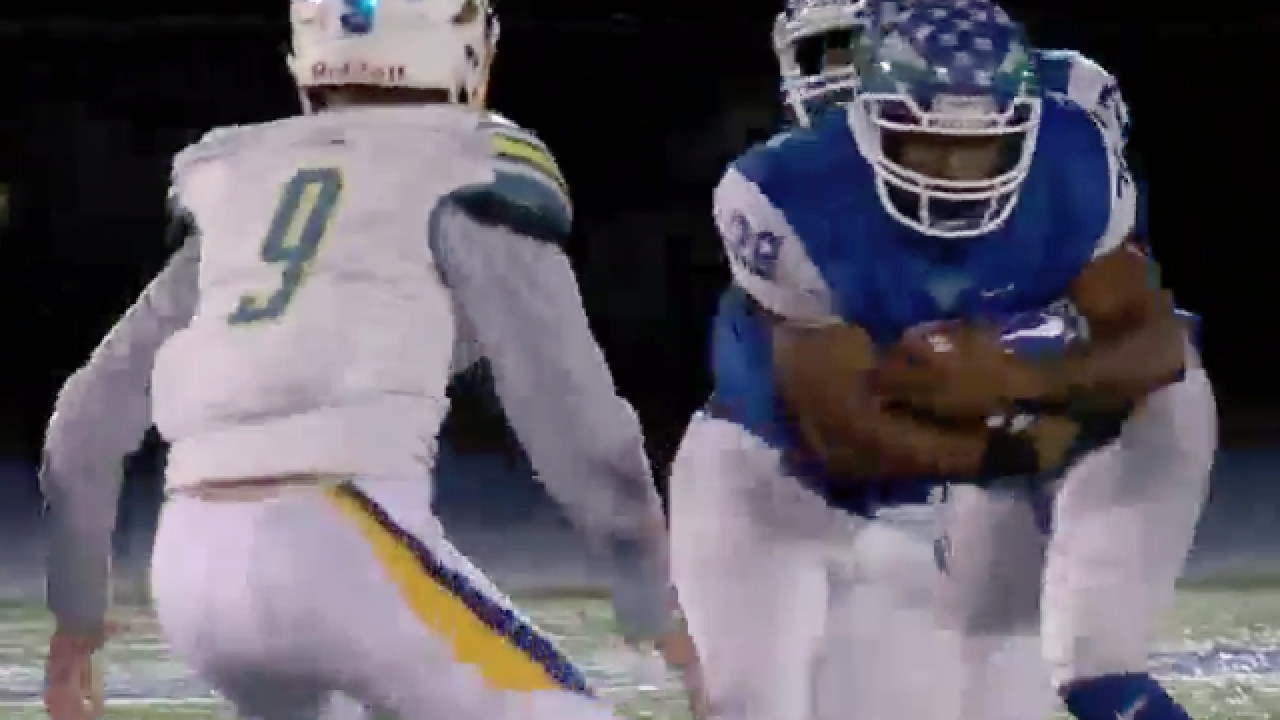 FOREST PARK, Ohio – Miyan Williams didn’t know what his stats were during Friday's memorable football game at Charlie Fredrick Stadium. He didn’t seem to care either.

The Winton Woods junior running back just knew he had to do everything possible to help his team climb back from a three-touchdown deficit in the first quarter Friday night.  The Warriors weren't messing around with their season on the line.

"It was real intense," Williams told WCPO Saturday morning. "It was crazy."

The host Warriors staged a significant comeback in the second half to defeat Lewis Center Olentangy 49-42 in a Division II, Region 8 quarterfinal.

Williams, listed at 5 feet 10 and 210 pounds, rushed 20 times for 430 yards and six touchdowns. Five of those touchdowns were in the second half. He scored four consecutive touchdowns between 9:43 of the third quarter to 9:35 of the fourth. His final score came at the 4:40 mark of the fourth quarter.

His 430 rushing yards is believed to be the most ever by an area player in an Ohio high school football playoff game.

“I just told him he was as good as I’ve ever seen in 20 years and to make sure he takes care of his business,” Olentangy coach Mark Solis told This Week News. “If he does that, he will go (to any college) he wants. He’s the real deal.”

WATCH Williams and Winton Woods highlights in the video player above.

Williams had the vision, power and speed for the Warriors (10-1) when they needed their standout the most. The offensive line created opportunities. Williams took advantage.

“You know what? I have never seen anything like it, to be honest,” Winton Woods coach Andre Parker said Saturday morning.

The 430 yards is the 25th most all-time for rushing yards in a game, according to the Ohio High School Athletic Association state record list. Williams is 45th all-time in OHSAA history in rushing yards in a single season (minimum 2,400 yards). He has 2,412 yards and 32 touchdowns this season.

He is the third Greater Cincinnati player to rush for 430 yards in a game, according to the OHSAA.
Reading's DeShawn Wynn rushed for 467 yards against Finneytown Sept. 22, 2000.

The most recent area player to rush for 400-plus yards was Taft's Nykwan Presswood in 2014 in a game against Troy Christian.
Williams broke the school record for rushing yards that was previously held by Hosea Simpson of Winton Woods (402 yards) against Harrison in 2004.

“(Williams) showed unbelievable speed last night and he was hitting the hole so hard he was coming out the other side untouched,” said ScoutingOhio.com director Mark Porter, who attended the game. “Watching his highlights from last night he had three runs for 150 yards that I didn’t know if he was touched but one time.”

Williams, who turned 17 Oct. 29, had touchdown runs of 88, 73, 71 and 52 yards each during the game. Williams went to bed around midnight or 1 a.m. and he said received plenty of well wishes from family and friends.

But, Williams didn’t get caught up in the attention despite having a lot of fun. He said he remains humble in his approach. That's a mentality that has helped the Warriors this season.

Still, the elite company he joined is staggering.

The OHSAA website state record lists are considered unofficial and there are many missing dates for players listed with the most rushing yards in a game in state history.

Among the players listed with the date of the games, Williams would be third all-time in Ohio for the amount of rushing yards in a November game during the playoff era (starting in 1972).

Williams, whose scholarship offers include UC, Maryland, Toledo, Kentucky and Rutgers, figures to be the area’s best candidate for the Mr. Football Award later this postseason.

The Cincinnati area hasn’t won the honor since Norwood’s Marc Edwards in 1992. But, Williams would certainly be strongly considered by a statewide media panel.

Winton Woods next plays Little Miami (9-2) in the regional semifinal Nov. 9 at a location that will be announced Sunday.

Winton Woods, the 2017 Division II state runner-up, wants another opportunity of reaching the state finals in Canton. Williams has mentioned the journey all season. He is certainly doing his part to help.

“He’s just a great kid,” Parker said. “He is always a person who greets you with a smile.”