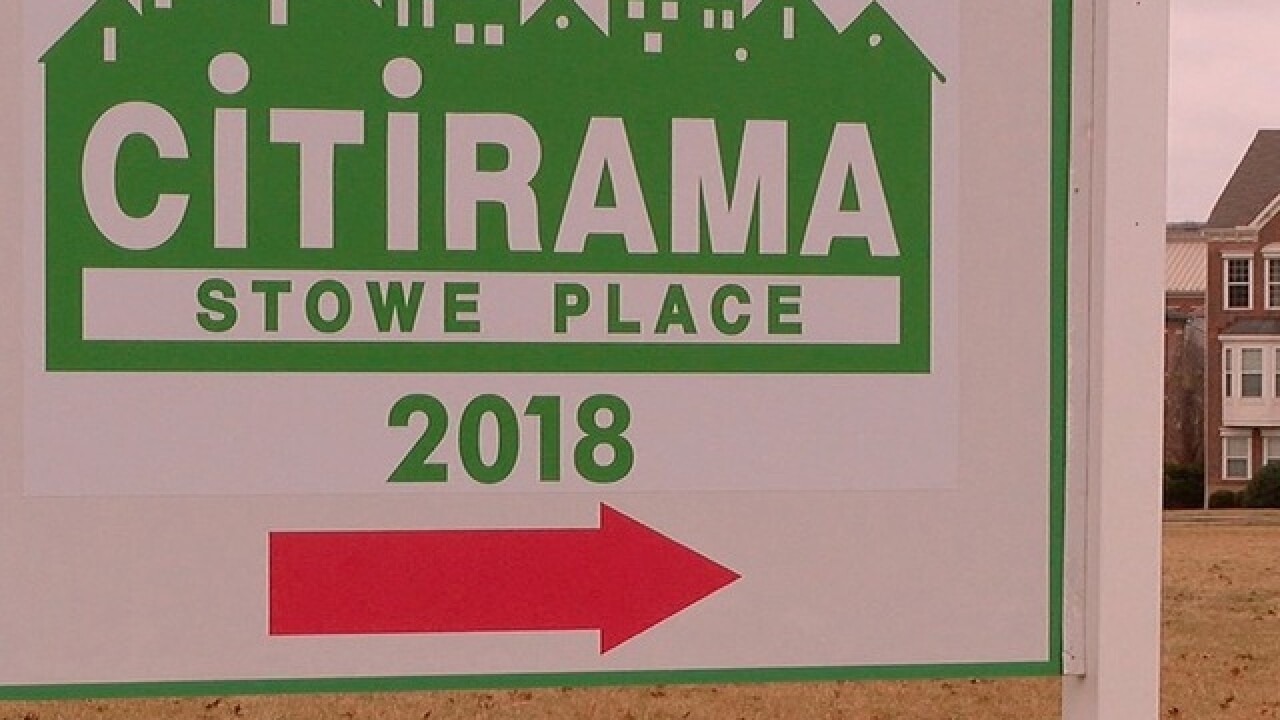 CINCINNATI -- As long as Jeff Berding insists that the site for an FC Cincinnati stadium hasn’t been determined yet, he might get more phone calls like the one he got Friday.

“We’re getting pitched every day on where we should put our stadium. I got one on the way over here -- a developer pitching a site,” he told WCPO anchor Tanya O’Rourke while at the station taping an interview.

It seems that everyone wants to weigh in on where FC Cincinnati’s planned $200 million soccer stadium should go -- or where it shouldn’t.

Berding, president and general manager of FC Cincinnati, has been catching flak since last week when WCPO revealed that the soccer club had taken options on 60 lots in the West End (but hadn’t signed any).

That happened a day after Berding wrote a letter inviting Cincinnati Public Schools to partner with the club in that neighborhood.

Berding said that resulted in “a lot of false reports out there that are getting people scared.”

Berding made a promise in his interview for the Sunday morning show “This Week in Cincinnati” on 9 On Your Side:

“It’s a real disservice to the public discussion that people are actually putting that out there.”

Berding also spoke about when he hopes Major League Soccer will award an expansion franchise to his club, what kind of celebration is in the works, what effect Miami and Columbus developments might have on their bid, and how FC Cincinnati would proceed in the worst-case scenario -- if MLS picks Sacramento or Detroit instead.

Those topics took a backseat last week when the stadium site issue blew up.

Berding, though, insisted that nothing had changed. The club is awaiting results of a traffic study in Oakley before engaging that community to find out if it’s a good fit for them, he said. The club pitched Oakley as its preferred site to MLS and the city and county last month. The West End and Newport are still options, he said. All three are “winning neighborhoods,” he repeated.

Berding said no one should make assumptions about the West End, even after the home builders association postponed plans to hold Citirama there after finding out FC Cincinnati took options on some of its lots.

Berding got a little exasperated when O’Rourke asked about that.

“People are missing it,” Berding said. “I’m not going to get into particular parcels.”

He said wherever the stadium goes, there would be a mixed-use development of residential, commercial and retail with it. (Not to mention parking garages and lots.)

“The fact that we’ve inquired on some different properties doesn’t mean that those are for building the FC Cincinnati stadium,” Berding said. “We’re talking about an overall development done in partnership with the community that can be a real home run. If we get the bid, we will do all kinds of community engagement with the stakeholders.”

He included community councils, residents, Mayor John Cranley, city council and the county commissioners. The latter two groups voted to provide $52 million for infrastructure for a stadium in Oakley.

Since the club bought the option on the Oakley site, Berding said signing any options in the West End would be “premature.”

“The whole point is let’s win the bid and figure out where is the best place to put a $200 million privately financed stadium to do the most good for our community,” he said.

Berding said he’s as optimistic as ever about winning the second MLS expansion franchise after Nashville got the first one last month.

Here’s what Berding said about:

When he expects MLS’s announcement: “I would assume at some point in February. I have a birthday Feb. 8, so that would be cool.”

Where FC Cincinnati would hold the public announcement and party: “That’s a good question. The question would be, to some degree, ‘How many people do we think would come?’ A public spot where you could get that many people. And what the weather would be expected to be.”

What impact Miami’s getting a franchise and the Columbus Crew’s possible move could have on FC Cincinnati: “Miami, we always understood. The understanding was that LA FC -- a second LA team -- would come in this year, 2018, as team 23 and Miami was going to be team 24 and they would be adding teams 25 and 26 from Detroit, Cincinnati, Sacramento and Nashville.”

Berding said the Crew owner’s intention to move the team to Austin, Texas, would have “no impact.”

“We’re being individually evaluated in conjunction with Sacramento and Detroit. We’re our own story here in Cincinnati. We’ve been enormously respectful of the Crew. They have a great club and obviously they have some issues they’re trying to work through."

What happens if MLS turns down Cincinnati’s bid: It wouldn’t be the end of the world, according to Berding.

In just two seasons, the club has been touted worldwide as an amazing success story, breaking one attendance record after another at UC’s Nippert Stadium. And Berding foresees more records this season.

“We might draw 30,000 this year on average,” Berding said, looking ahead to its third year in the second-tier United Soccer League.

Only one MLS team averaged more than 30,000 last year. Seattle drew 43,666 in the football stadium built for the NFL Seahawks.

“We’re thrilled with our partnership with the University of Cincinnati. I met with (Athletic Director) Mike Bohn yesterday … UC’s great and we’ll stay there as long as we’re in the USL. But if we want to move up a division to MLS we are required to build a soccer stadium …"

And better late than never, Berding seemed to say.

“There’s going to be another round of expansion to teams 27 and 28 and I’m sure we would participate in that process,” he said.