Soccer stadium may not end up in Oakley after all 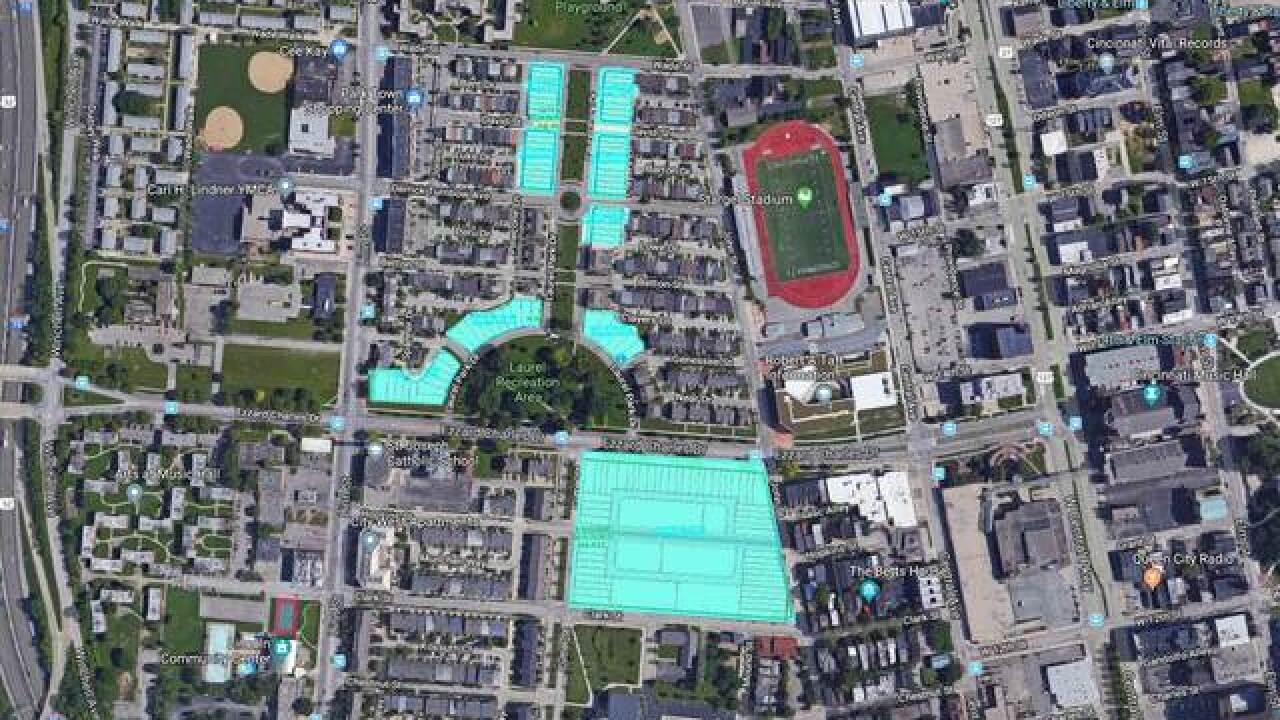 Copyright 2018 Scripps Media, Inc. All rights reserved. This material may not be published, broadcast, rewritten, or redistributed.
Google Maps

CINCINNATI -- FC Cincinnati has asked to buy more than 60 vacant lots in the West End from the Cincinnati Metropolitan Housing Authority. raising the odds that it will build a soccer stadium there, not in Oakley.

FC Cincinnati submitted an agreement to CMHA for the properties after approaching CMHA on Jan. 16, according to a spokesperson for the agency.

The deal is not final: the CMHA board will need to consider and sign off on the property purchases.  The board's next meeting is scheduled for Jan. 30.

WCPO requested any correspondence between CMHA and FC Cincinnati on Tuesday, a day after FC Cincinnati and President Jeff Berding sent a letter to Cincinnati Public Schools laying the groundwork for a partnership in the West End.

According to documents WCPO obtained, FC Cincinnati is interested in a hodgepodge of vacant lots that border residential housing, including homes CMHA owns, west of Stargel Stadium and Taft High School - both Cincinnati Public School properties.

FC Cincinnati also signed an option agreement for the Cast Fab site in Oakley late last year. The club submitted Oakley as its stadium site when it presented its bid to Major League Soccer for an expansion franchise last month. Since then, however, MLS has delayed a decision on Cincinnati's bid.

Talk of a possible soccer stadium on the city's West End has heated up in recent days. Berding acknolwedge that team leadership and CMHA have had discussions surrounding the stadium.

"Any plan will be the result of real community engagement and will need to be a win-win for parties involved, whether it be CMHA, CPS, neighborhoods and the city as a whole," Berding said in a text message.

Berding opened communication with CPS officials Monday night in an emailed letter to board president Carolyn Jones. Berding said the club might be interested in a partnership in the West End if Oakley proved non-viable.

The Oakley site is dependent on the results of an independent traffic study that would measure whether a stadium would make a positive addition to the neighborhood.

"We do want to keep as many options on the table as possible, given we still need the traffic study results before Oakley could be approved," Berding wrote to Jones. "We would welcome, at the appropriate time, a meeting to discuss a potential FCC-CPS partnership in the event we choose to pursue a West End stadium location."

A CPS board member, Ryan Messer, told WCPO's Evan Millward Tuesday that CPS would have to examine the possibility closely, from both a CPS and community perspective.

"Perhaps that is the best location, but the problem is we don't know that because we don't have the engagement work in place that says, 'Here's how the community feels about that decision and here's why it makes sense or why it doesn't make sense,' and that's a critical piece," Messer said.

School board member Mike Moroski said Monday was the first time he heard from FC Cincinnati leadership about a potential partnership.

"We had not been contacted by FC Cincinnati; this was the first contact from the organization," Moroski said about the emailed letter. "The full board needs to meet about it until we respond to this letter. It will require a lot of engagement."

The city and county voted in November to provide $52 million in infrastructure costs. City Council agreed to provide $37 million and Hamilton County commissioners pledged to build a 1,000-space parking garage at an estimated cost of $15 million.

"We appreciate that Oakley is being considered as a possible site for the FC Cincinnati stadium and we commend FC Cincinnati for also considering other neighborhoods within our Tri-State area before rendering a final decision. Should Oakley be the decided location, we hope that FC Cincinnati will follow through on their promise to fully engage with the Oakley Community Council and the residents of Oakley as stated in Jeff Berding's letter to the Cincinnati Public Schools Board President before a final 'go ahead.'"

Just spoke to @fccincinnati GM @JeffBerding he sent letter to CPS tonight asking to meet ab potential stadium in West End. tells me, 'Oakley is an option, Newport is an option, the West End could be an option." Letter is included here. The latest at 11 on @WCPO #FCCincy pic.twitter.com/sDOIPwwOxP