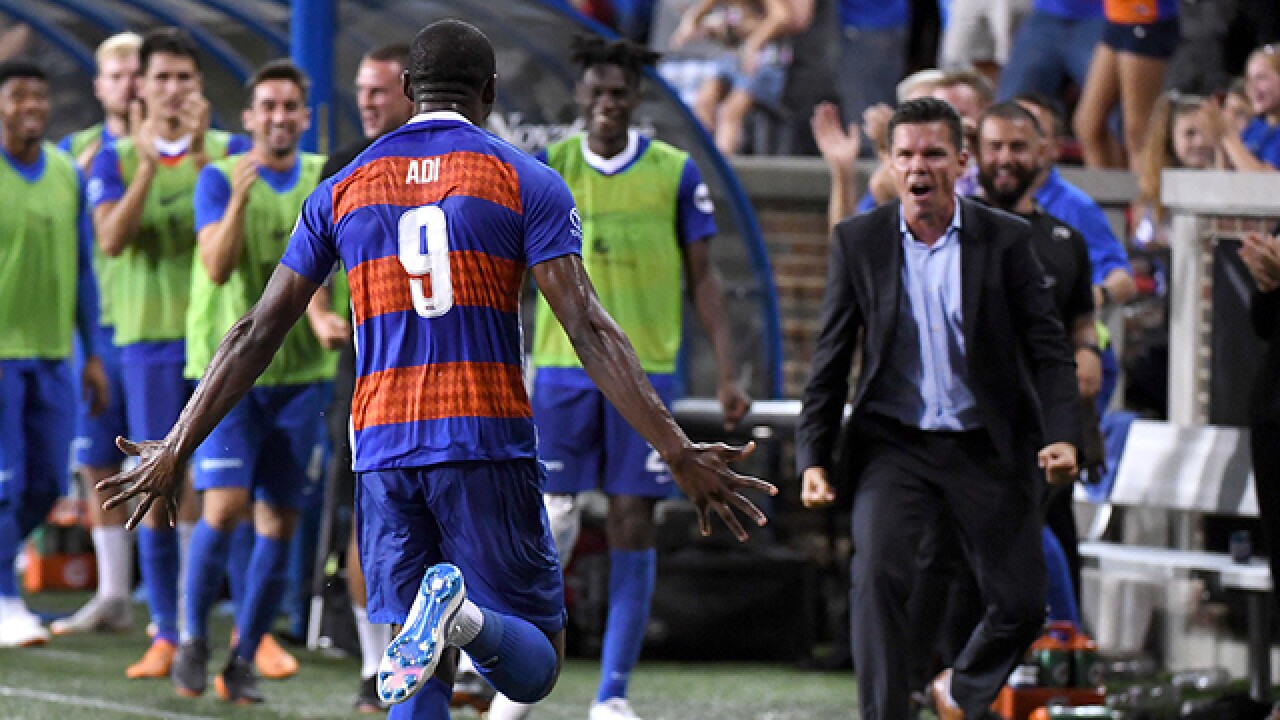 CINCINNATI — Fanendo Adi said with confidence he had the biggest smile of anyone at FC Cincinnati’s first preseason training session as a Major League Soccer expansion team.

The 28-year-old forward spent the last three months of his 2018 season playing down a division in the United Soccer League as the first big piece to FCC’s roster for the jump to MLS this year.

FCC acquired him — the club’s first designated player — from the Portland Timbers on July 30, the same time the team also brought in midfielder Fatai Alashe on loan from San Jose Earthquakes with an exchange of allocation money for his MLS rights.

The two players helped FCC win its first major trophy in the form of the USL regular-season title, and neither had any regrets about the path they took, but Adi and Alashe were ready to get back to MLS.

“It was amazing,” Adi said after FCC’s first practice Tuesday at the University of Cincinnati’s Sheakley Athletic Center. “You guys will not believe it, but I was the one most smiling today in training and excited because, really, I'm very well settled in. I am happy. I am excited to be back in MLS. I am excited to have new teammates and see guys that are going to work toward this six-week time for the first game.

The club brought Adi and Alashe in last summer with the intent they could be the foundation of the MLS roster.

RELATED: FC Cincinnati Coach Koch: We're a much different team than last May

The three months they spent with the USL team enabled them time to get acclimated to the city, the coaching staff and the club as a whole, so FCC would have two MLS-ready players already adjusted to their environment on Day 1.

Koch said that seemed to pay off for both players Tuesday.

“They were both buzzing,” Koch said. “You could see it. I think there were times where they were buzzing for us when they were here for that (three)-month spell, but they were buzzing, both of them, today. Now it's up to them and us and the entire group to make sure we're all buzzing every single day. To be successful this year, we're not going to be able to take any days off. Whether that's training, games, we're going to be ready to fight every single day. They were both ready to fight today.”

Alashe said it was tough switching teams and going to a lower division last year but acknowledged “that was part of the process with coming here.” He, too, is excited to be back in the MLS environment again.

“I think part of it is just having a new team,” Alashe said. “It's good. It's new guys, guys with a lot of quality. They did a great job bringing in some great players. It's an exciting feel. Any time you are starting a new year, it's exciting, but this one especially.”

Adi and Alashe were joined by nine other players from the USL rosterm a mix of newcomers from other MLS sides or different countries and six from the college ranks. Members of the group have just two weeks to get to know one another before the first exhibition game.

A couple individuals were still undergoing medical exams Tuesday, and at least two were held out because of injuries. Fourth-year FCC midfielder/forward Jimmy McLaughlin is out with a knee injury, and expansion draft pick Greg Garza, who won the MLS Cup championship with Atlanta United last year, suffered a minor quad injury while training with the U.S. men’s national team. He said he is “day to day.”

“It's nice to be back around the guys, have the guys back in training and kind of get used to all the new guys as well,” Alashe said after the first practice. “So far, it seems like we have a pretty good group of guys that get along and all the guys are really cool so I'm excited.”

With a rebuilt roster, it helped having some familiar faces with the guys from the USL team and a few others Adi and Alashe knew from previous playing experiences.

FCC has received some criticism from national pundits for taking so many USL players, but Alashe said he wasn’t surprised by the number brought up to MLS.

“Last year they did a great job building a really good team,” Alashe said. “You saw the success we had in USL. There was a reason for that, you know. The players we had last year were all very quality players, so it's good for all those guys that have an opportunity. Obviously, at the same time, the guys that moved on, we wish them the best as well. I wouldn't say I'm surprised. It's guys that deserved opportunities to show themselves in this league and I think they will all handle it well for sure.”

Now it’s just a matter of adjusting to the speed of the game and higher quality of play. Training on Tuesday looked much like the team’s practices in USL but with quicker pace, and players were clearly bigger, stronger, faster and more technically advanced.

Alashe said, despite his time in USL, it wasn’t difficult to transition back to the MLS level of play.

“It feels pretty normal,” Alashe said. “You try to keep your standard high no matter where you are playing, but I think it's a lot easier to make the jump back up than going down."

Adi said that although he is comfortable with the club, he has never been through a preseason with Koch and the rest of the staff, so he looks forward to seeing how the transition goes these next six weeks. There is something “new” for everyone.

His message to the newcomers, especially some of the younger players who are new to MLS, was not to get too caught up in trying to be perfect.

“I told the new guys that are in today, I said, 'The most important thing is to enjoy,'” Adi said. “’'Go out and smile. Don't be too tied up with making mistakes because that's how you learn. If you are trying to be so correct, you are not learning, but make the mistakes and correct yourself.’ It's just absolutely amazing we could see beautiful play from Leo (Bertone). ...

"Today is just the first day, but we have to build on that and keep going forward.”