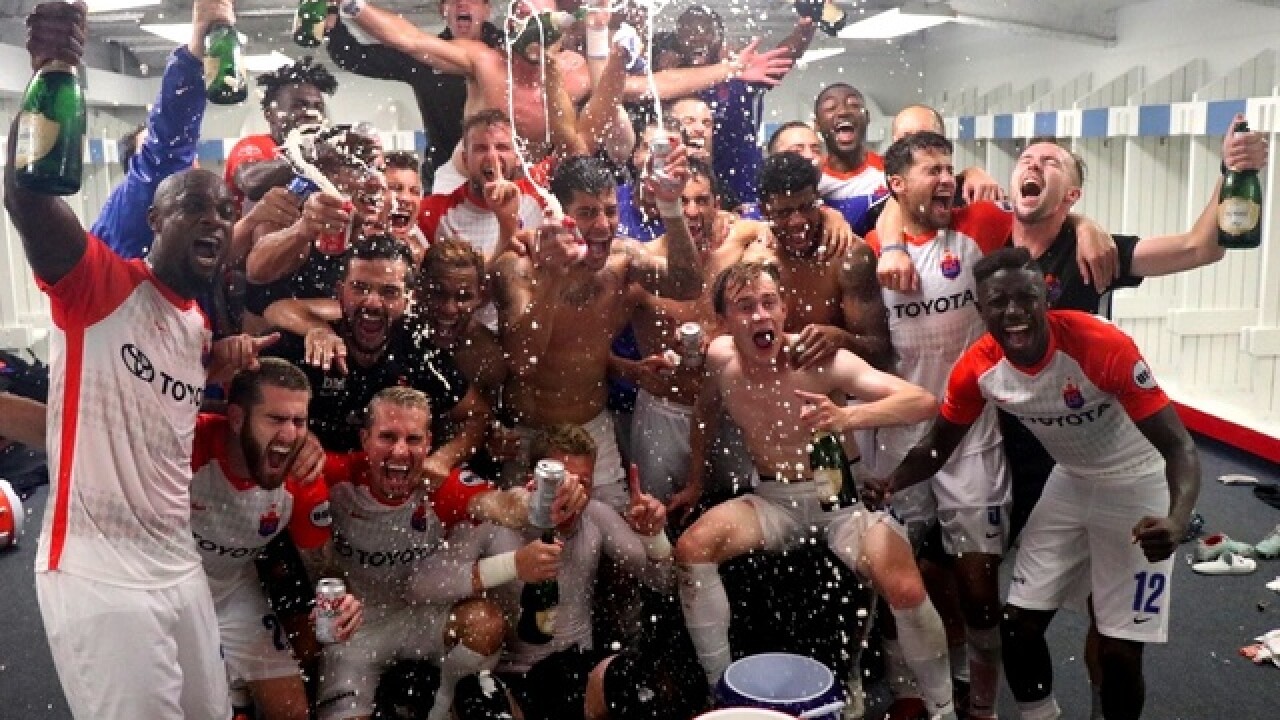 When FC Cincinnati President and General Manager Jeff Berding laid out his vision for the club in front of fans at an open house event in October 2015, he said the goal was to win a championship by Year 3.

The Orange and Blue delivered right on schedule Wednesday night, but in greater fashion than even Berding probably could have imagined.

FCC clinched the United Soccer League regular-season title (the Supporters' Shield) on the road Wednesday with a 4-1 win over the Richmond Kickers at City Stadium, while extending its unbeaten streak to 20 games, becoming the winningest club in league history with three matches to go and establishing a handful of other new standards.

The shield is the club's first piece of silverware in its last USL season before rising to Major League Soccer next year and gives Cincinnati home field advantage throughout the playoffs.

"It's exhilarating," Berding said via phone Wednesday night. "I love my city. Our city is hungry for winning. When our sports teams win championships it brings joy across the city. We know we're a winning city, but we can say it emphatically with our sports teams. It's what we wanted from Day 1.

Ledesma's brace put him at 16 goals for the season, tying the club's single-season scoring record set by Sean Okoli in 2016, and made him the first player in USL history to tally 15 goals and 15 assists in one season. He already broke the league's assist record (previously 13) in the last home game Sept. 16 against Toronto when he assisted three of the team's four goals.

Nazmi Albadawi actually got FCC started Wednesday with his 10th goal of the season. He finished off a give-and-go with Emery Welshman to give Cincinnati a 1-0 lead in the 16th minute, but Richmond answered with a strike from Heviel Cordoves after a breakdown on FCC's back line for the equalizer in the 32nd minute.

Ledesma scored both of his goals in the five-plus minutes before halftime to put the Orange and Blue up 3-1 at the break, first bending in a corner kick to the far post and then launching a left-footed shot from the outside corner of the box.

FCC, which clinched first place in the Eastern Conference with a win at Penn FC on Saturday, wasn't done.

Shortly after returning from a 90-minute weather delay in the second half, Albadawi found Welshman on the run, as he beat two defenders before tucking a shot past Richmond keeper Brandon Barnes for the dagger in the 63rd minute.

"Our club has been building toward this for three years," Koch said. "There's obviously difficulty in our sport to win a league championship but it's something we all work for every single day. I think Jeff (Berding), the owners, myself and our entire club, at the end of last season, we weren't happy with how we finished in the league. We obviously set about rebuilding a team and putting a team in place that could achieve something like we did tonight.

"It's amazing to see the guys you go to work with every single day … everybody is absolutely ecstatic. It's the epitome of what we do every single day. We all sacrifice so much to achieve this."

The Orange and Blue celebrated on the field afterward and with champagne in the locker room, but the only thing missing Wednesday was the electric crowd that fills Nippert Stadium at home games.

FC Cincinnati will celebrate Saturday with Fan Appreciation Night and a trophy presentation when the club hosts Indy Eleven in the home finale.