FC Cincinnati Coach Koch: We're a much different team than last May 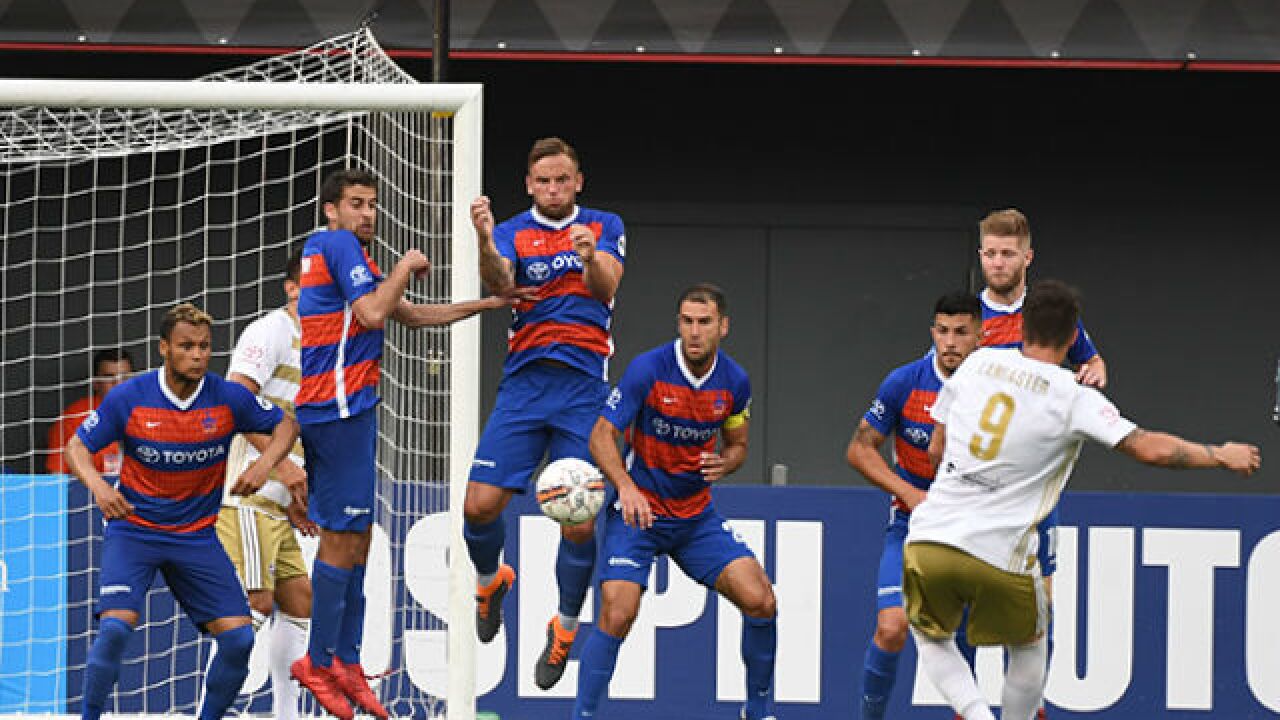 Copyright 2018 Scripps Media, Inc. All rights reserved. This material may not be published, broadcast, rewritten, or redistributed.
<p>Louisville City FC forward Cameron Lancaster (9) kicked and scored against FC Cincinnati goalkeeper Evan Newton (1) in the first half at Nippert stadium Saturday May 26, 2018. FC Cincinnati lost 0 to 2 against Louisville City FC. Photo by Joseph Fuqua II for WCPO</p>

CINCINNATI -- It’s been more than 100 days since FC Cincinnati took a loss, and coach Alan Koch couldn’t care less that his next opponent is also the last one to beat his squad.

The Orange and Blue carry a 16-game unbeaten streak into a rivalry match at second-place Louisville City SC on Saturday, and as Koch pointed out, they are a much different team than the last meeting May 26.

New starting midfielder Fatai Alashe is one of them, and he hopes to be a difference-maker Saturday if given the opportunity.

Alashe and forward Fanando Adi joined the team from Major League Soccer in late July as acquisitions for the club’s inaugural MLS roster next year and were joined by fellow newcomer Pa Konate on loan from Serie A’s S.P.A.L. All three have appeared in games and made an impact, including Adi scoring the game-winner against Pittsburgh last week, but Alashe in particular has made a mark over the past four games – all of which he has started.

RELATED: FC Cincinnati's Fanendo Adi is adjusting to playing in the USL after years in MLS

“It takes time to acclimate to things, the city, the weather, the team, but I think so far it's gone pretty well,” said Alashe, who previously played for the San Jose Earthquakes. “It's a slow process, but obviously I've gotten a couple starts under my belt and now it's just a matter of continuing to build fitness and hopefully I can turn some of those starts into 90 minutes soon.”

With midfielder Michael Lahoud on leave as a callup to Sierre Leone’s Africa Cup of Nations qualifier Sunday in Ethiopia, FCC might very well need Alashe for a full 90 minutes Saturday. The club has other options with its lineup, but Alashe has been solid in his first four appearances, and Cincinnati has benefited from his contributions during the back part of a five-game win streak.

Alashe made his debut Aug. 18 and played 62 minutes before being replaced by Lahoud in a 3-0 win over Charleston. He then played 71 minutes at Atlanta and scored his first goal in a 5-1 rout before Lahoud once again spelled him.

The 24-year-old played alongside Lahoud for 55 minutes in a 2-1 win at Tampa until Kenney Walker came on, and last weekend against Pittsburgh, Alashe played 72 minutes before being subbed out by Jimmy McLaughlin.

Alashe said he was brought to Cincinnati as a foundation for next year but also to help the team in its quest to win the United Soccer League Cup. FCC has been atop the USL Eastern Conference for 18 of the last 19 weeks – obtaining a grip on first place long before he arrived – so he feels no more pressure in big games like Saturday’s than any other outing.

“Every game you are expected to perform and improve the team and do your best to help,” Alashe said. “I think that not only goes for us, but every player. There are always little pressures added to every game but it goes for the whole squad. We were brought here to do a job with an eye on next year but the task at hand is winning games and that's week in and week out.”

Koch ultimately has high expectations for Alashe or he and technical director Luke Sassano wouldn’t have brought him to the team at this point, but he also understood it could take some time for all three of his newcomers to integrate into the club.

Alashe, who also is beginning to settle personally after recently moving into an apartment downtown, has been a steady force as a central holding midfielder. He’s drawn attention from opponents as a leader in fouls won while playing a role in the back end of FCC’s current five-game winning streak.

“He’s a good young player who’s shown his ability in MLS but just because you show it in MLS doesn't mean you show it in USL,” Koch said. “They are very different leagues but we are very happy with how he's come in and shown he can do it here, too. We're excited to have him now and in the future.”

Alashe’s insertion into the starting lineup has brought some unique challenges for a player accustomed to quality facilities while in MLS.

His first two road games were both played on baseball fields, and now his third could be as well. Louisville City plays at Slugger Field, the home of the Reds’ triple-A team.

“The pitch is the pitch, and there's not a whole lot you can do about it,” Alashe said. “The good part about that is both teams play on the same field so it's not an advantage or disadvantage for anyone. The last two baseball fields we played on actually weren't too bad, especially since they were both grass, which is ideal. We play on this turf here (at Nippert), so we're kind of used to interesting experience regarding fields, and that's not something we use as an excuse.”

Although the rivalry is new for Alashe, he already had been informed going into this week of some of the history between the two teams. FCC has just three losses this season and two have come against Louisville, and the two rivals have played some heated battles in the past.

Alashe would like to help turn the tide against Louisville this weekend.

“I know several of the guys have said they have done well against us in the past so that's definitely something we need to turn around and especially this time of the year those are three very important points that are on the line,” he said. “If we can go down there and take this game, that's something that can help set us up to keep our position on top of the Eastern Conference.”