Coach Bill Lazor: Cincinnati Bengals will be 'just fine' while Joe Mixon is out 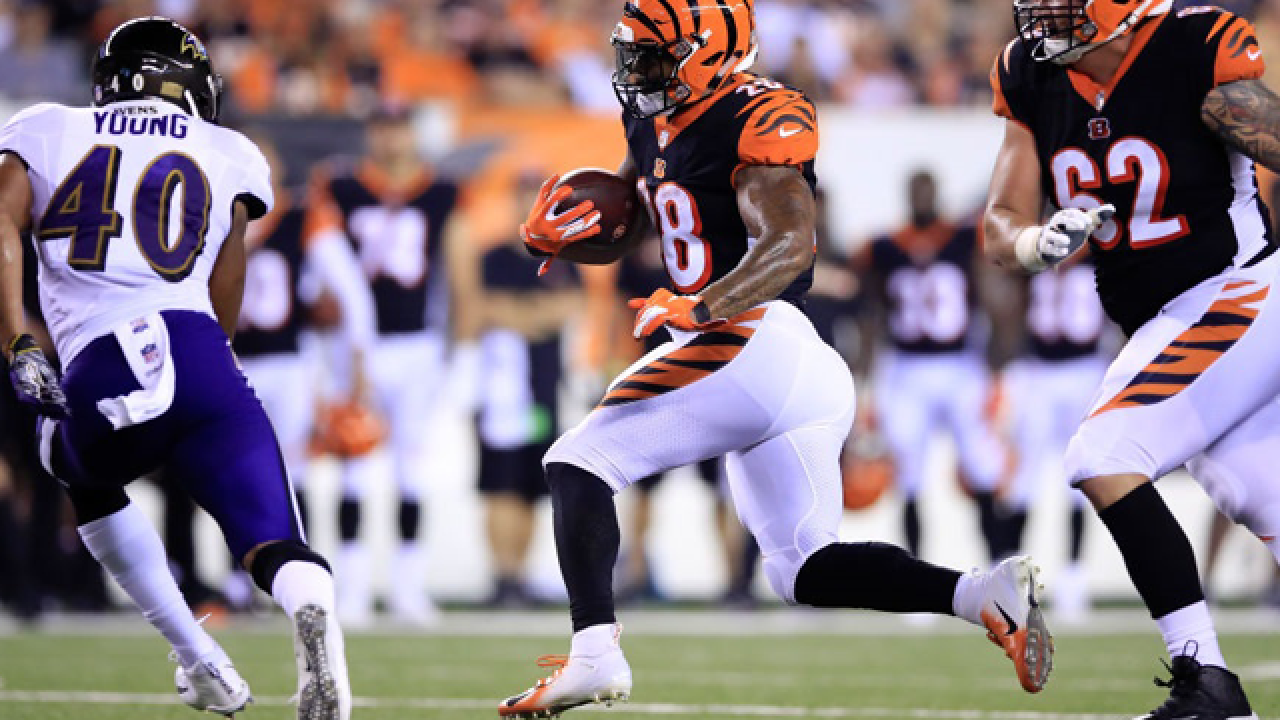 Copyright 2018 Scripps Media, Inc. All rights reserved. This material may not be published, broadcast, rewritten, or redistributed.
<p>CINCINNATI, OH - SEPTEMBER 13: Joe Mixon #28 of the Cincinnati Bengals runs with the ball in the game against the Baltimore Ravens at Paul Brown Stadium on September 13, 2018 in Cincinnati, Ohio. (Photo by Andy Lyons/Getty Images)</p>

CINCINNATI -- Cincinnati Bengals offensive coordinator Bill Lazor said he thinks Giovani Bernard is a better runner than he is given credit for working out of the backfield.

Lazor points to Bernard’s performance against Detroit last year as evidence that the Bengals will be “just fine” without starting running back Joe Mixon for a few weeks. Bernard touched the ball 30 times on offense in that win on Christmas Eve and finished with 168 yards from scrimmage.

The Bengals (2-0) will need that kind of effort this week at Carolina (1-1) if they are to keep Lazor’s retooled offense moving as it has the past two games. Mixon, the team’s second-round draft pick last year, already has 231 yards from scrimmage in two games but underwent arthroscopic surgery to repair a small particle from his right knee Saturday and is expected to miss two to four weeks.

RELATED:  What a difference a year makes: Cincinnati Bengals find a way to finish the game on top

“I think Gio was underrated as a runner,” Lazor said Monday. “For whatever reason people talk about all of the things he can do, because he can do so many things, but if you go back and watch his inside runs from last year, now some of it was when we spread people out, but he was a pretty effective inside runner. He can do a lot of different things and hopefully we can find a couple of things for him this week. I think we're facing a really, really good defensive front seven. It's a challenge.”

Bernard has carried the ball just seven times over the first two games, even with Mixon leaving Thursday’s win against Baltimore twice after injuring his knee in the first quarter. Mixon returned after one series each time and said after the game he wasn’t concerned about the knee because he had been able to keep playing through it.

Trainers didn’t find anything wrong with the knee when they checked him out Thursday (it wasn’t until Friday the team learned it was more than a tweak), and Mixon still managed 84 yards on 21 carries.

“In a perfect world you're always getting a lot out of both of them,” Lazor said. “The way the first game worked, Gio was in for three bad runs, so his drive -- sometimes you say it's his drive -- it didn't last long. Sometimes it's the luck of the draw and we can adjust to that as the game goes, but the other part of it is a guy gets a hot hand and you let him go. We've seen Gio do that last year against Detroit when he had (30) touches. He got going and you say keep feeding him. I think it goes back and forth. To me the only negative to one guy being in there and getting the ball is the other guy isn't and I like them both.”

Bernard, 26, was the Bengals’ second-round pick in 2013 and has been a solid all-around back, particularly as a blocker and target on short passes. His best season was 2015 when he rushed for 730 yards and added another 472 yards receiving but the following year his time was cut short by an ACL tear that limited him to 10 games.

In his return last season, he had 458 yards rushing and 389 yards receiving. Cincinnati was expecting a big leap this year being a full season removed from surgery.

“I don't look at Gio any different (than Mixon),” Lazor said. “I don't want to compare him to anybody, but to me, the guy is a warrior. Coming off knee surgery from two years ago and then what he did last year, I just think he's a warrior. I think he's really unique physically, and to be able to do that at his stature, to play the way he plays. He finishes runs, he doesn't go out of bounds. He doesn't go down easy. The guy is a warrior. I have great respect for him. I really do. Do we have to be smart with him? Absolutely, but no different than with any other running back.”

Mixon’s injury doesn’t appear nearly as severe as what Bernard went through two years ago. He thanked his fans on social media for their thoughts and prayers Saturday and said on Twitter “the procedure went great.”

The former Oklahoma standout wasn’t in the locker room Monday during the 45-minute period it was open to media and was not on the rehab field at the start of practice either.

Bernard also wasn’t available to speak Monday, but had expressed after the opener at Indianapolis that he had no concerns over his lack of carries. He has seized opportunities before and likely is ready to do so now.

Lazor said he has enough confidence in Bernard as the go-to back. Cincinnati will face a Panthers’ run defense that ranks 24th while allowing 132 rushing yards per game. However, it likely will take more than just him to get by while Mixon is out.

Tra Carson, an undrafted signee in 2016, is the next running back on the depth chart. He spent all of 2017 on injured/reserve after suffering a groin injury in the preseason but looked solid throughout camp this year and earned a place on the roster ahead of Brian Hill. He has been active the past two weeks ahead of rookie fourth-round draft pick Mark Walton, though mainly appearing on special teams.

“He can play both halfback and fullback now and he’s taken to that,” Lazor said. “It hasn’t been a big thing yet but it’s something he’s done. … For me, with Tra, if he gets more opportunities at halfback I expect he’s going to do just like he did in preseason, which I thought was fantastic.”

A 1,000-yard rusher as a senior at Texas A&M, Carson was on the Bengals practice squad for the first 15 games as a rookie before being called up to the active roster for the season finale, which he did not play.

Lazor said he can run with power and “understands the play speed of the runs” and where they are supposed to go.

Though he hasn’t touched the ball on offense in an NFL game yet, Lazor said he is capable of complementing Bernard in the running game.

“I think it's hard for one back to go through any game, but I think between Gio and Tra we will find a way -- I hope,” Lazor said.