What a difference a year makes: Cincinnati Bengals find a way to finish the game on top 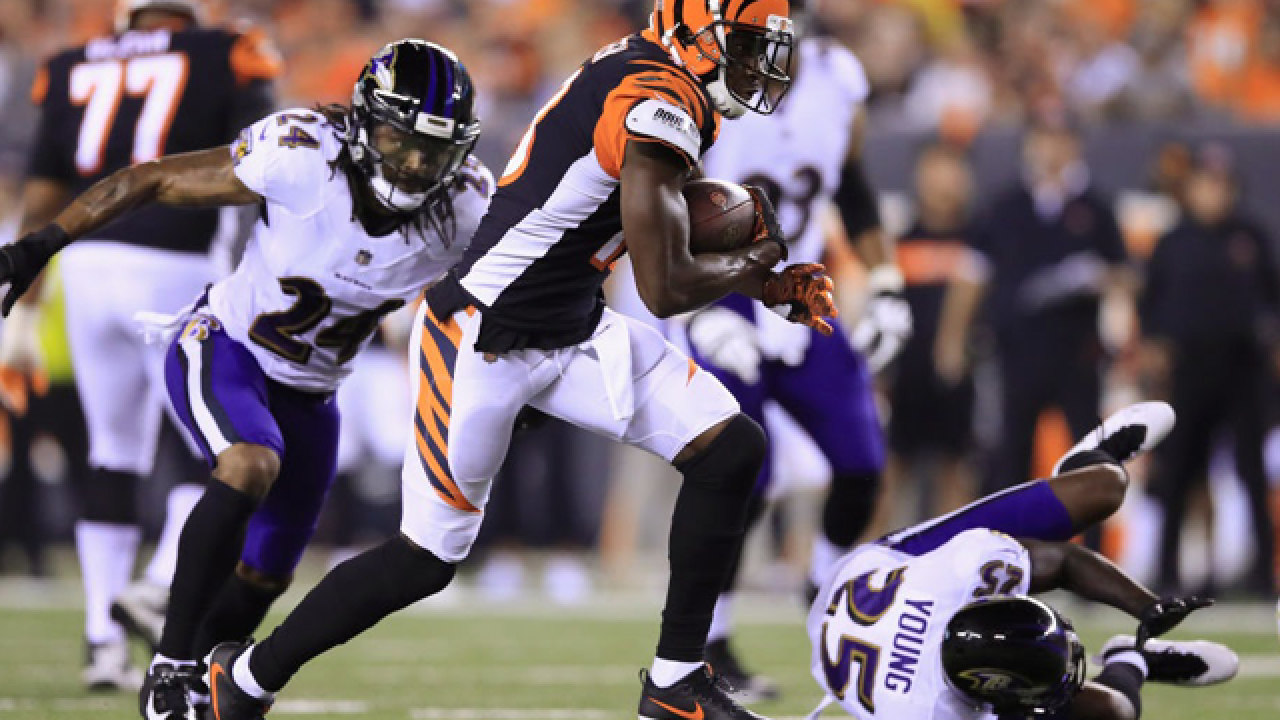 Copyright 2018 Scripps Media, Inc. All rights reserved. This material may not be published, broadcast, rewritten, or redistributed.
<p>CINCINNATI, OH - SEPTEMBER 13: A.J. Green #18 of the Cincinnati Bengals runs on his way to scoring a 32-yard receiving touchdown during the first quarter against the Baltimore Ravens at Paul Brown Stadium on September 13, 2018 in Cincinnati, Ohio. (Photo by Andy Lyons/Getty Images)</p>

CINCINNATI – At this point in the season last year, the Cincinnati Bengals were 0-2 and in complete disarray.

Offensive coordinator Ken Zampese was fired after two weeks when the Bengals failed to score a touchdown in the first two games. Following a particularly dismal loss to the Texans, A.J. Green sounded off in the locker room about his frustration with the offense.

The offense is humming under coordinator Bill Lazor, and after an offseason of uncertainty with many fans calling for Marvin Lewis to be fired, things are rocking again at Paul Brown Stadium.

The Bengals outlasted the Baltimore Ravens 34-23 on Thursday night. They have started the season 2-0 for the first time since 2015 when they went 8-0. Thursday’s win, coupled with the Steelers and Browns tie last weekend, catapulted the Bengals into sole possession of first place in the AFC North.

Most noticeably, it was the second straight week the Bengals overcame injuries and adversity to win a game they might have lost in past years.

Finishing games has been a point of emphasis since April during the team’s initial meetings. Green said that mindset was established at the end of last season, when the Bengals won the final two games of the regular season against Detroit and Baltimore to build momentum for this season.

RELATED: Could the Cincinnati Bengals have a repeat of the 1988 season?

“We talked at the start of training camp how those two games defined us as a team,” Green said. “We could have laid down and not played our best. We weren’t playing for anything, but we were playing for each other, playing for coach Lewis. That momentum carried into the offseason and then carried into the season.”

“The thing we talked about since we got started in April is making sure we close out games,” Lewis said. “Obviously we got off to a fast start today, and it was needed. The big thing is we didn’t have a turnover in the game.”

The Ravens might have been eyeing revenge on Thursday too, after last year’s regular-season finale when Dalton threw a 49-yard TD pass to Tyler Boyd on fourth-and-12 with less than a minute left to boot the Ravens out of the playoffs.

The Bengals lost starting center Billy Price to a right ankle injury late in the first quarter and he did not return. When Price left the game, the Bengals led 14-0. Green’s third touchdown catch of the first half made the score 21-0 in the second quarter.

After Baltimore got on the board with a Joe Flacco TD pass, the Bengals answered with an impressive 75-yard, five-minute, 22-second drive capped by Tyler Boyd’s 14-yard TD catch. Boyd had six catches for 91 yards and a TD.

“He’s a guy I’ve seen grow from his first couple years,” Green said of Boyd. “It’s night and day. This guy comes to work every day.”

The offense is clicking under Lazor, and there were signs of that last season. Dalton was 24 of 42 for 265 yards and four touchdowns on Thursday. Green had five catches for 69 yards and three TDs.

“The quarterback is playing his tail off,” said Lewis. “Andy directed the offense. Went in and out of different tempo things tonight to keep them off his heels. He continues to play very well. We have put some guys around him.”

With Price leading the cheers from the sideline in a walking boot, the Ravens crept back into the game on a touchdown pass from Flacco with eight seconds left before halftime to cut the Bengals’ lead to 28-14.

The Bengals chose to forgo an opportunity run some clock late in the half in order to preserve a 28-7 lead going into halftime.

Momentum continued to shift in the second half when the Bengals went three-and-out on their opening possession in the third quarter. Justin Tucker’s 55-yard field goal cut the Ravens’ deficit to 28-17.

The Bengals had nine penalties for 92 yards, including a false start on Cordy Glenn to help stall their second drive of the third quarter.

There were some anxious moments for Bengals fans in the second half, but the defense responded at key moments. They sacked Flacco four times and disrupted him often.

The Bengals stopped the Ravens’ on fourth-and-two from inside the 45-yard line. Then, later Shawn Williams intercepted Flacco’s pass after it was deflected by Carlos Dunlap.

But, a 21-yard touchdown catch by John Brown who somehow got both feet down in bounds made the score 28-23 with nine minutes left.

The Bengals punted five straight times beginning with their final possession to open the door for the Ravens’ comeback.

But, that streak of punts ended late in the fourth quarter when Joe Mixon who twice left Thursday’s game with a knee injury and was downgraded to questionable in the third quarter, returned with a key 21-yard run that led to a 28-yard Randy Bullock field goal to put the Bengals ahead 31-23 with 2:59 left. The game was essentially over at that point.

While Bengals players and coaches were reluctant to talk about the 0-2 start to last season, the importance of winning those final two games in December was something they all could agree on.

Pardon the cliché, but what a difference a year makes.

“We were a little depleted at the end of (last) season,” Lewis said. “The guys showed their character and resilience, the pros that they are. That group that’s still here. We found a way to win those last two ballgames. Until the last two seasons, they thought going to the playoffs was automatic. They like that. They want to get back there.”