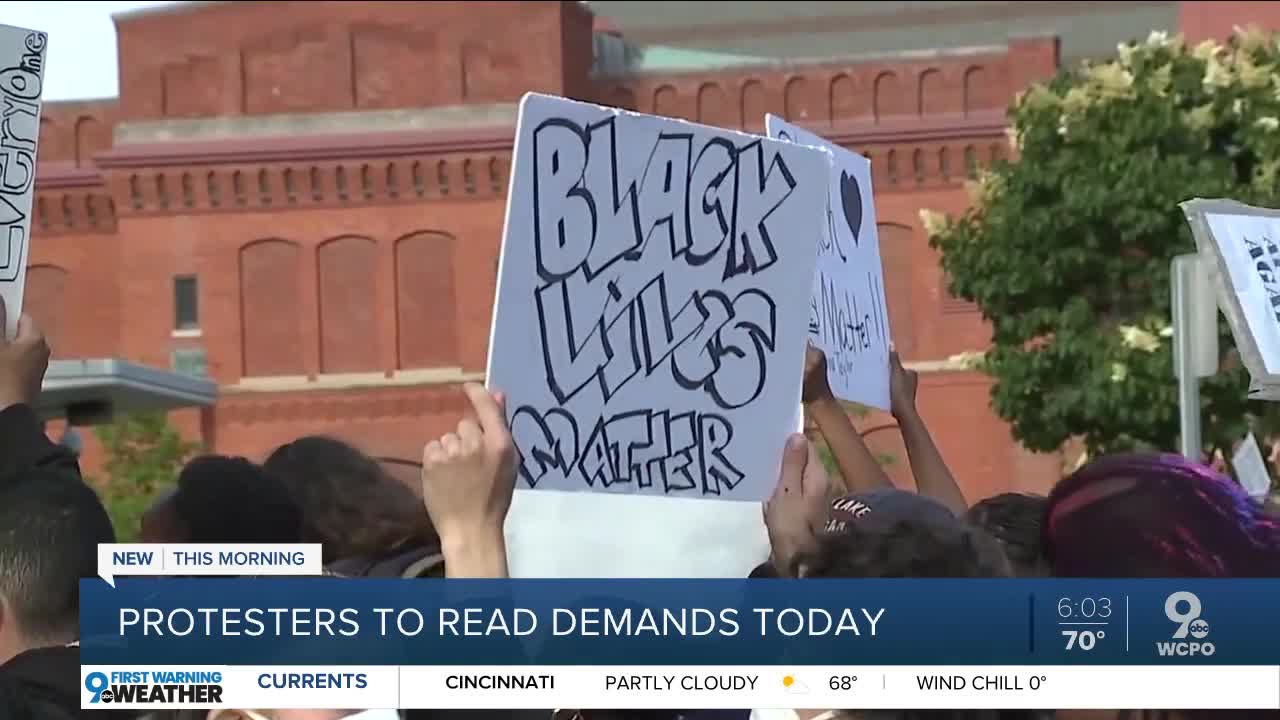 CINCINNATI — As protests over the death of George Floyd enter their seventh day in Cincinnati, protest organizers and community activists read a list of recommendations on the steps of City Hall on Thursday, all changes they want to see enacted in public safety and interactions between black citizens and police.

“What we have assembled here is to tell you what we’ve done so that you don’t think all is lost,” said Iris Roley, an activist with the Cincinnati Black United Front. “That there is a pathway to getting what you’ve done, too.”

Roley said the goal of the recommendations is to take a closer look at the systems in place today that promote systemic and institutionalized racism.

"I'm very frustrated at this time, but yet hopeful, because there's so many folks in the street," Roley said.

Roley said the changes need to go beyond police reform and into the education and healthcare systems, as well as affordable housing.

For many at the rally, the pathway to racial equality throughout Cincinnati is not a road less traveled.

“20 years ago, we pulled out every tool in the toolbox,” said Reverend Damon Lynch III. “We filed a class-action lawsuit. We marched, we protested, and we put a boycott on the city of Cincinnati that impacted the city by 70 million dollars.”

The times may have changed, but the circumstances have not. People are marching in the street fighting for racial freedom.

“When you’re getting your strategy together, don’t lose sight of the bigger picture,” Lynch said. “Our communities are being gentrified. Our people are being displaced.”

The list of recommendations is long, and many of them center around public safety focusing on things like problem-solving in the field by police.

“This builds trust in the community and has better outcomes than life-long criminal records, court debt and incarceration,” the document reads.

The suggestions are not just in response to police brutality and the protests – they also include stipulations surrounding the pandemic. One of the six recommendations is to have charges dropped for social distancing violations. Protesters say black people in the region have been disproportionately charged and arrested in those cases.

City Councilwoman Jan-Michelle Kearney and Vice Mayor Christopher Smitherman are working on a motion to present before City Council on Tuesday asking for charges to be dropped for protesters who were demonstrating peacefully but broke curfew.

“You can’t just sit back and say everything’s fine," Kearny said. "Everything is not fine. I think the protests are showing that the problems are not just in Minneapolis, you know. We have some problems here. The fact that they broke the curfew, but they were being peaceful, we want those charges dropped against them.”

Conversations have been ongoing between the Ohio Justice and Policy Center, the Black United Front and Cincinnati Police Department Chief Eliot Isaac. Cincinnati Mayor John Cranley said he is eager to meet with groups and have discussions.