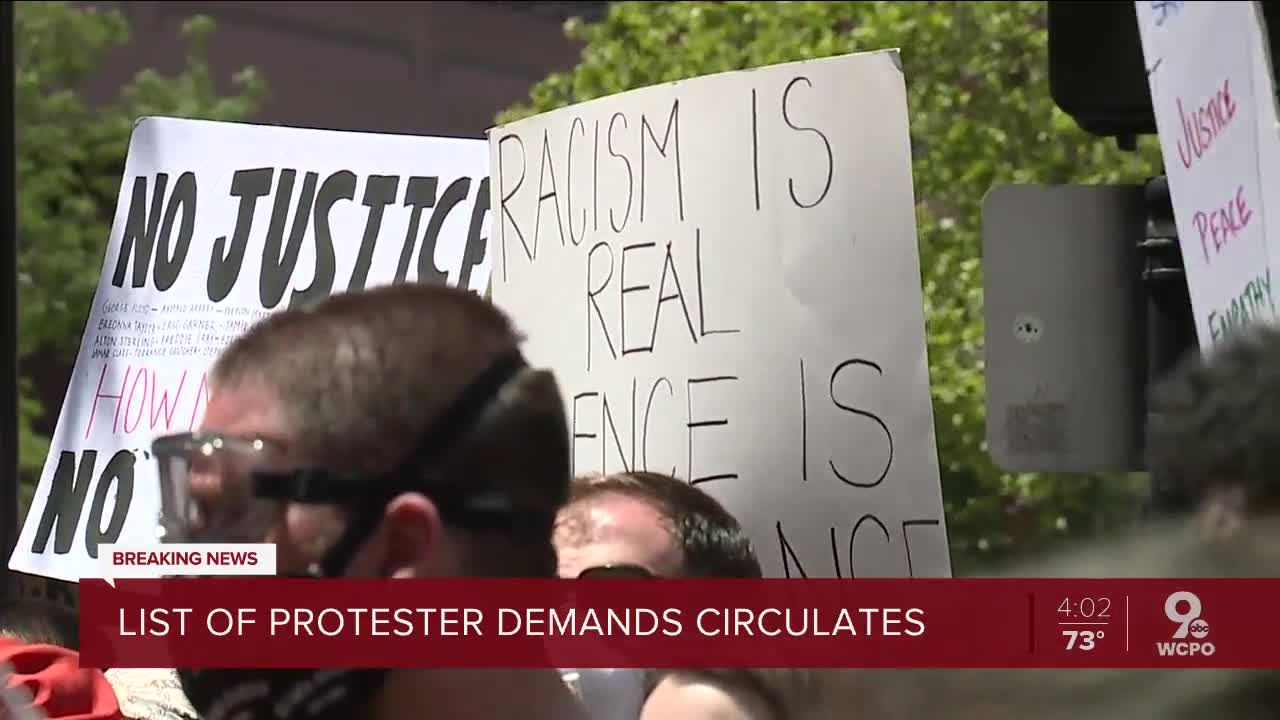 After a weekend of nationwide protests sparked by the death of George Floyd, Cincinnati-area protest organizers released a list of things they want to see change within the Cincinnati criminal justice system.

CINCINNATI — After a weekend of nationwide protests sparked by the death of George Floyd, Cincinnati-area protest organizers released a list of things they want to see change within the Cincinnati criminal justice system.

"The intention of this list is to deliver a clear message to the media, local politicians, the Cincinnati Police Department and people of Cincinnati as to the goal of recent protests," the list reads.

The first item on the list calls for Derek Chauvin, the officer arrested for Floyd's death, to receive the maximum sentence for his charges and for the other three officers involved in Floyd's death to be charged as well.

The remaining items on the list concern the Cincinnati area.

Some of the items include a call for the demilitarization of the Cincinnati Police Department, independent internal affairs investigators and civilian oversight boards and a call for CPD officers to spend "80 hours a year volunteering in the communities they patrol..."

Another item on the list also calls for Ray Tensing, the former University of Cincinnati Police officer who killed Sam DuBose in 2015, to be brought to justice by local and federal officials.

The list has a total of 15 items, and it was authored by a handful of protesters. The list can be read in full below.

The mayor’s office, Cincinnati City Council Members and the Cincinnati Police Department said they have not been given a specific list of demands yet.

The Collaborative Agreement, which was put in effect in 2002, addresses several of the protester’s demands; a citizen complaint authority is already in place. All police officers have body cameras, and the agreement addresses the police department’s use of force policy.

“We want to make sure that we are targeting things that make sense for Cincinnati, that cops are not using excessive force,” Pastor said. “We have a collaborative review board, a manager's advisory group. We have those things and there are calls to strengthen those things, so nothing like what happened in Minneapolis would happen here.”