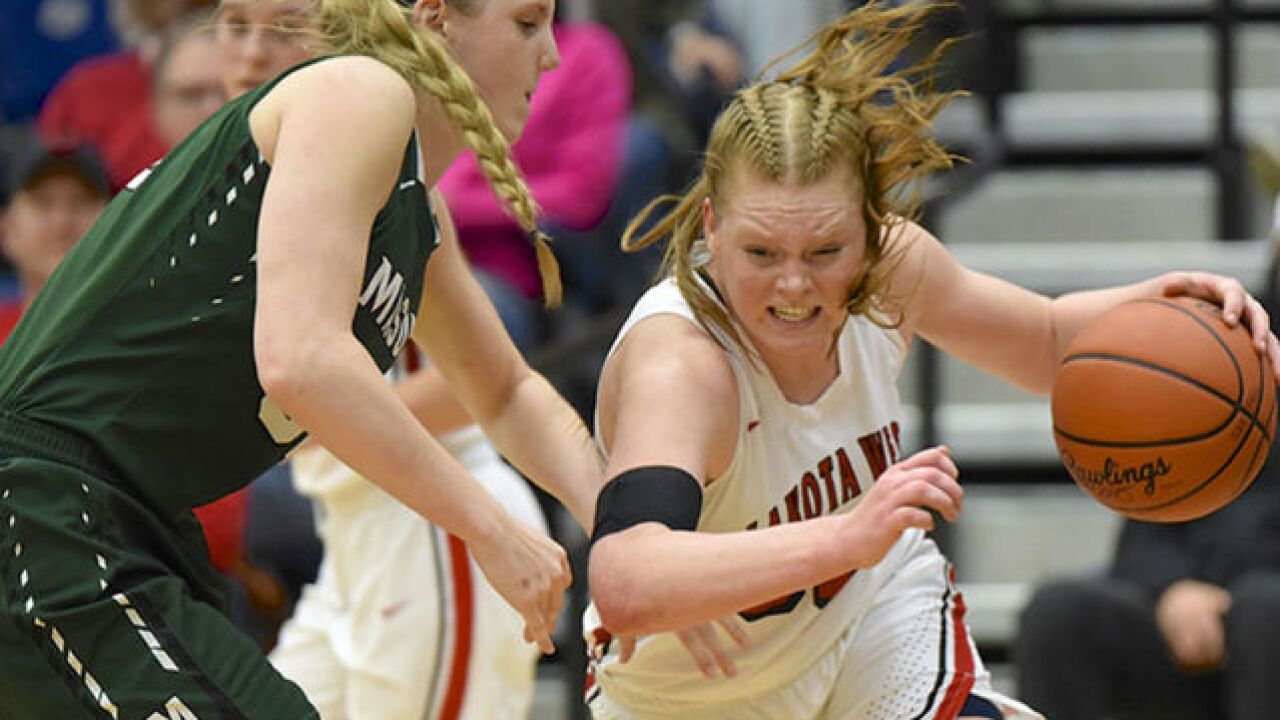 Copyright 2018 Scripps Media, Inc. All rights reserved. This material may not be published, broadcast, rewritten, or redistributed.
<p>Lakota West's Abby Prohaska drives against Mason's Sammie Puisis during a game between the Greater Miami Conference rivals this past season. Prohaska and Puisis have accepted invitations to participate in the USA Basketball Women's Under-18 National Team Trials later this month. (Photo by Jenny Walters)</p>

The training camp will feature 36 basketball players participating in practices at the United States Olympic Training Center May 26-28. Prohaska and Puisis are two of only three Ohio players to be invited.

The 12-member USA Women’s U18 National Team is expected to be announced May 28 in Colorado.

“It’s an incredible opportunity for them to have a chance to represent our country,” said Bryce McKey, who has coached both players for the Sports City U team in Amateur Athletic Union (AAU) .

Prohaska, who has signed with NCAA National Champion Notre Dame , is one of 14 invited players with previous USA Basketball training camp experience. She earned a bronze medal at the FIBA U17 World Cup in the summer of 2016 .

"The opportunity is a blessing," Prohaska told WCPO. "I'm beyond excited to have another chance to represent my country. It's always a humbling experience to be surrounded by such great players."

Puisis, who is verbally committed to Florida State , is one of 14 invited players new to USA Basketball.

“Obviously, it is a great honor for Sammie to be invited to the national camp tryouts and the significance lies in that she is being rewarded for her hard work,” Mason coach Rob Matula told WCPO.

“Sammie flat out works as hard or harder than any player I have had, in regards to making herself a better basketball player.

Prohaska and Puisis became friends through AAU and saw each other plenty during the high school season between the Greater Miami Conference rivals. Mason (24-4) defeated Lakota West (25-3) in the Division I regional final March 10 at Kettering Fairmont after the teams split the regular-season series. Mason completed its season as a state semifinalist.

Mason and Lakota West have been GMC co-champions the past two seasons.

Puisis, who is 6 feet 2, and the 5-10 Prohaska were named to the all-state team this past season. Puisis, who averaged 16.9 points, 6.1 rebounds, 2.9 steals and 1.4 assists, was named the Southwest District Player of the Year .

Puisis continues to be an excellent 3-point shooter and her mid-range elevation on her jumper is another strength. McKey said defense and rebounding continue to be underrated aspects for Puisis. She often guards the other team’s top player.

“Sammie works very hard at improving her game whenever she can but probably what we are seeing improve the most is her physicality and her defensive movement,” Matula said.

Prohaska graduates from Lakota West May 17. She reports to South Bend June 15 with classes starting June 18.

Prohaska, the Greater Miami Conference Co-Player of the Year this past season, has the ability to drive, pass or shoot. She averages 15 points, 6.4 rebounds, 4.2 steals, 3.0 assists while shooting 48.6 percent from the field and 37.5 percent from behind the 3-point line.

"She’s in the gym and weight room six days a week preparing as usual which she’d likely be doing regardless because she never really trains for an event," Lakota West coach Andy Fishman said. "She pushes herself as a way of life."

Prohaska had 21 points, 10 rebounds and four assists in the regional final March 10 at Kettering Fairmont.

The trio will guide the USA at the 2018 FIBA Americas U18 Championship, for which the dates and location are still to be announced. The top four finishing teams at the championship will earn a qualifying berth into next summer’s 2019 FIBA U19 World Cup.

The team members will return to Colorado Springs for training camp (dates to be determined), before the team departs for the 2018 FIBA Americas U18 Championship.