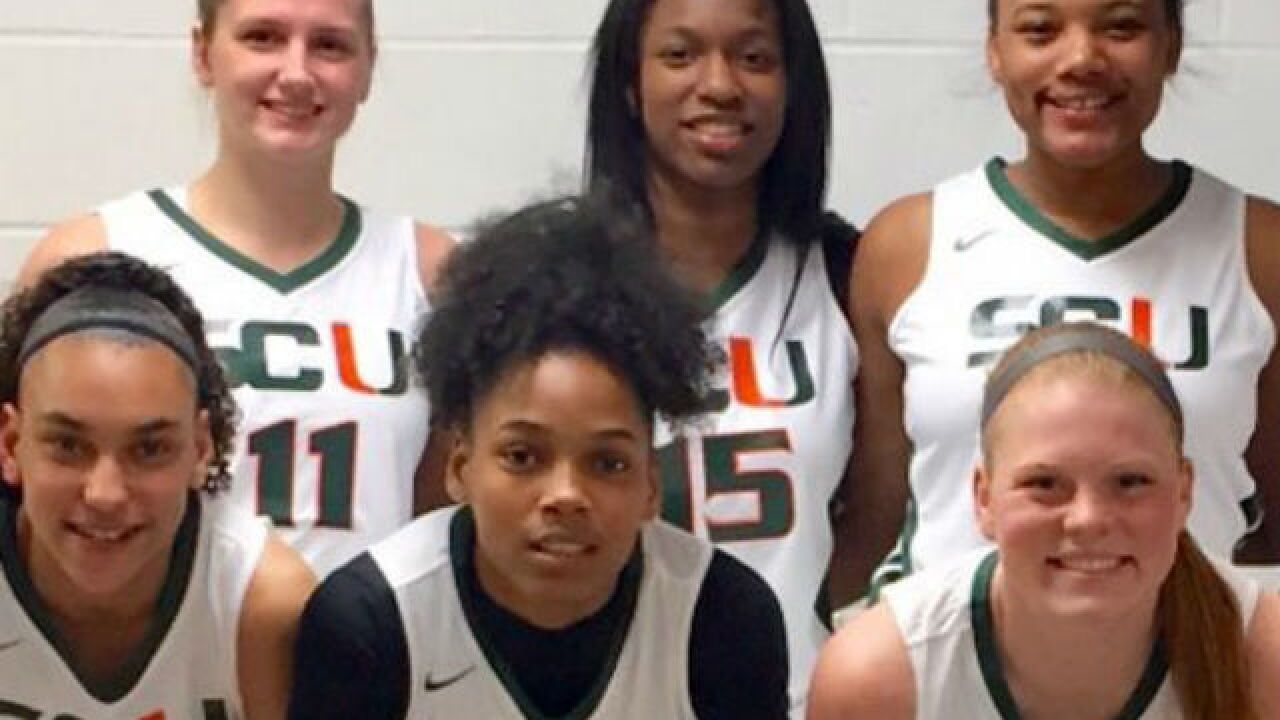 Copyright 2017 Scripps Media, Inc. All rights reserved. This material may not be published, broadcast, rewritten, or redistributed.
<p>Lakota West senior Abby Prohaska (center, front row) and Mason junior Sammie Puisis (first from left, back row) have become friends on the Sports City U team this summer.</p>

That vibe was certainly understandable given their competitive nature. After all, Lakota West and Mason are known for being elite girls’ basketball programs that go deep into the postseason tournament every year.

And when you have the sheer intensity of a regular season or postseason game involving the rivals, that is difficult to replicate in this part of the state.

As leaders of their respective high school girls’ basketball teams and Greater Miami Conference powers, Prohaska (Lakota West) and Puisis (Mason) were the only area players to be on the Associated Press Division I all-state first team last winter.

Add to the fact the Comets and Firebirds have played each other six times over the course of the past two seasons -- including twice in the regional tournament -- and it's no wonder the rivalry is so anticipated each winter.

But, Prohaska, a senior guard/forward, and Puisis, a junior guard, quickly found common ground this spring as teammates on the Sports City U team.

A few team bonding events, such as building a tower with pasta sticks and marshmallows, helped to break the ice at the outset too.

“I think they were really nervous right when they came in because they had a certain perception of each other,” said Sports City U coach Bryce McKey. “But, when they started to practice with each other and saw how competitive they both are -- they both love to win and hate to lose -- they just had a lot of common denominators that make them the players that they are.”

Prohaska, who is verbally committed to Notre Dame, was part of the USA Basketball Women’s Under-17 World Championship Team that earned a bronze medal in the summer of 2016.

Puisis, one of the nation’s most recruited players in the 2019 class, was named the AP Southwest District Player of the Year last season as a sophomore.

McKey, an OGBR Associate Director, said Prohaska and Puisis developed a rapport quickly as teammates. That has helped Sports City U be undefeated through more than a dozen games this summer. The team plays early this week in the Cincinnati area and will travel to Washington D.C. at the end of July.

“Both of them being the leaders of their teams and coming back and having the friendship off the floor is pretty cool to watch,” McKey said.

Marshall has been playing with Prohaska in AAU for five years. Marshall watched the Crystal Ball Sunday at Lakota West.

“It’s been amazing,” Prohaska said. “It’s definitely crazy that me and Sammie are teammates now along with Gabbie. Playing against them all these years and going to head-to-head, and then all of a sudden having to work together on the court and get along -- it’s been a journey. I’m really excited to continue that and finish out the season with them, because they are good teammates to play with.”

McKey said Prohaska and Puisis complement each other on the floor. Prohaska drives the ball well, while Puisis has excellent range from beyond the 3-point arc.

“It’s amazing,” McKey said. “Even during a rougher game for them, you just know that at any point they can go off and hit a couple threes or just make game-winning plays. You always want them on the floor because you just believe in what they can do. They are both just dynamic players in different ways, so they complement each other well. You always know you are going to get their best effort. You don’t have to coach effort, which is huge. They are a lot of fun to coach.”

Prohaska is known for being an incredibly competitive player on the floor. Whether she is making a move in the post, spotting up for a jumper or diving for a loose ball, Prohaska has helped the Firebirds in many ways the past three seasons.

“Playing against her you don’t realize how competitive she is until you play with her,” Puisis said. “In practice she is always busting her butt on sprints and stuff. I noticed that and she is an incredible player. Who wouldn’t want to play with someone that competitive? She is so much fun to play with.”

Puisis and Prohaska appreciate the opportunity to get to know each other. They’ve carpooled this summer during the AAU season. They’ve also learned each other’s tendencies on the court – something that could certainly help this winter. Each has a goal of a state title for their high school team this season.

Lakota West coach Andy Fishman says the mutual respect from the Southwest Ohio players is a benefit to the game and something the players will look back to when this winter arrives.

“I think that’s really good for the community of girls’ basketball -- that people come together,” Fishman said. “We can expect great competitiveness when they play against each other, but we should also have great sportsmanship and a great camaraderie for when we’re not.”