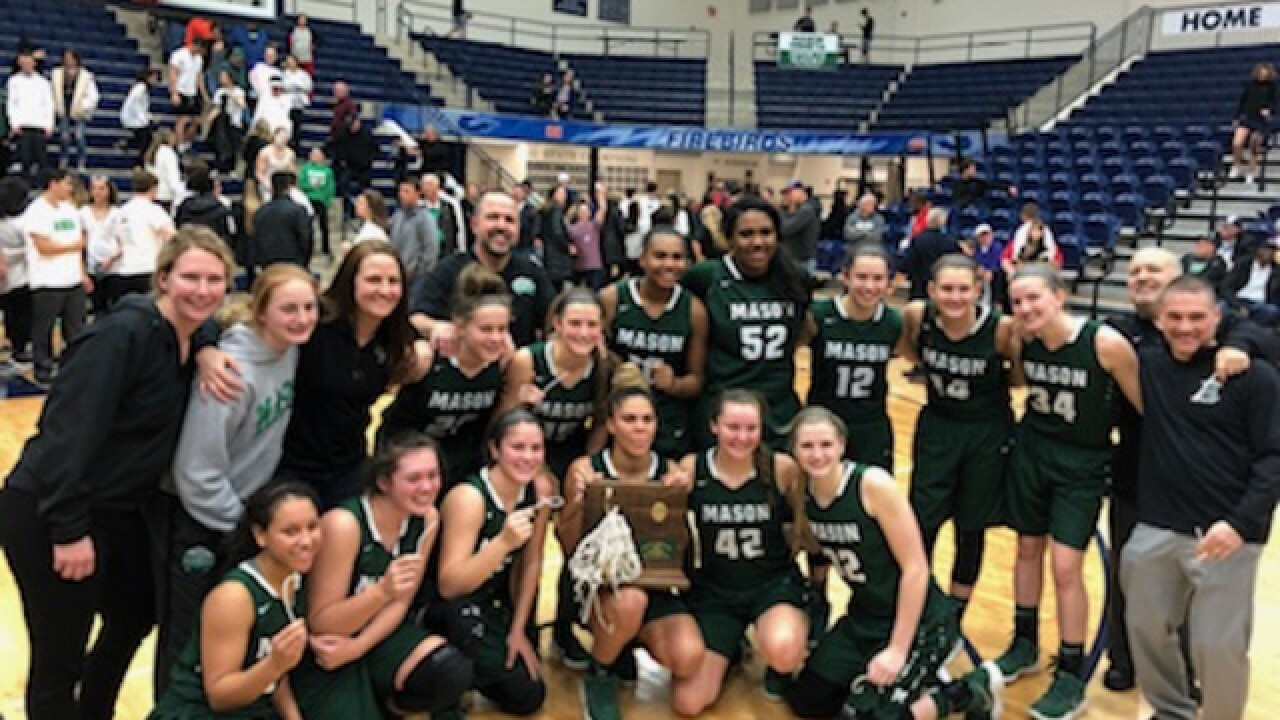 And the Comets are prepared to give everything they have to bring a state title back to Mason.

“We are going to go give it hell and hopefully it goes our way,” said Mason coach Rob Matula.

Mason defeated Lakota West 54-51 Saturday night to win the Division I regional title in front of 3,100 at Trent Arena.

This is the fifth state tournament appearance for Mason. The Comets won the state title in 2000.

Mason will return to Columbus for the first time since 2016 when it was a Division I state runner-up.

“It’s the pinnacle,” Matula said of returning to Columbus. “That’s your goal. It really is. It’s hard to believe, but I knew we had a good enough team. It’s an unbelievable group.”

The highly-anticipated All-Greater Miami Conference regional final lived up to every bit of the hype Saturday night. There were 11 lead changes and seven ties.

“They are as focused and resilient of a group that I’ve ever coached – boys or girls,” Matula said. “It’s unbelievable how resilient they are.”

Mason junior guard Sade Tucker had a season-high 20 points to go along with three steals to lead the Comets.

Tucker made two free throws in the final 11.5 seconds to help lift the Comets.

“It was incredible,” Tucker said. “It’s the best feeling in the world. I’ve never been in this position.”

The Mason players celebrated with the student section shortly after the game before cutting down the net.

“The energy (from the student section) is so great,” Fulton said. “It really amps us up as a team. I feel it makes us play better as a unit.”

The Firebirds led most of the fourth quarter until Puisis made a free throw to tie the game at 46 with 1:36 left. Tucker’s transition layup 30 seconds later gave Mason a 48-46 advantage and the lead for good.

Lakota West (25-3) was led by senior guard/forward Abby Prohaska, who had a game-high 21 points to go along with 10 rebounds and four assists. Senior guard Ally Haar added nine points on three 3-pointers.

“The pace was quick,” Prohaska said. “I think we hung with them for just about all game except for the last few seconds. They took advantage of our mistakes, and there is nothing else you can do.”

Lakota West coach Andy Fishman said the Firebirds left everything they had on the Trent Arena floor Saturday night.

The Firebirds completed a memorable season including a district championship and GMC co-title with Mason for the second straight season. Fishman told his players he won't soon forget the effort they gave this winter.

“I thanked them for the heart and the pride that they represented this program with,” Fishman said. “Our seniors - who are all fantastic competitors – I never thought that they stopped fighting."