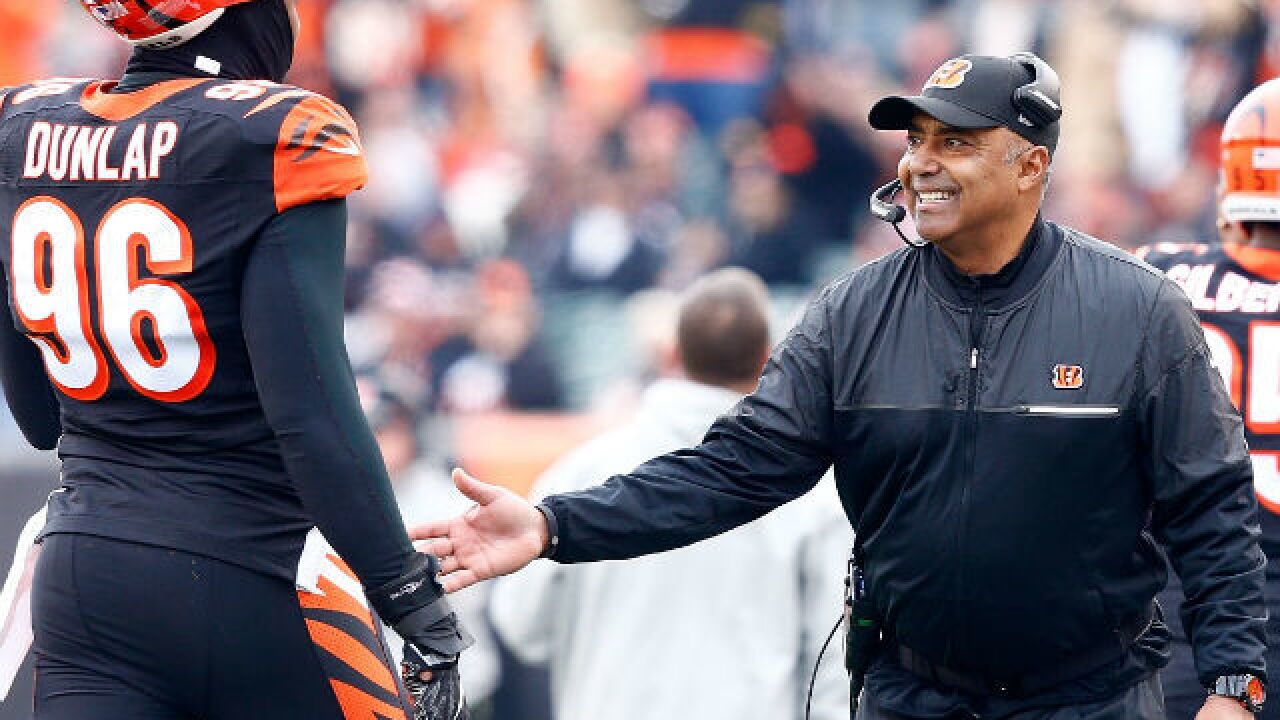 Image copyright 2017 Getty Images. All rights reserved. This material may not be published, broadcast, rewritten, or redistributed.
<p><span>CINCINNATI, OH - JANUARY 1: Head Coach Marvin Lewis of the Cincinnati Bengals congratualtes Carlos Dunlap #96 of the Cincinnati Bengals after making a defensive stop during the third quarter of the game against the Baltimore Ravens at Paul Brown Stadium on January 1, 2017 in Cincinnati, Ohio. (Photo by Michael Hickey/Getty Images)</span></p>

Editor's note: Three weeks after we published this story, Marvin Lewis agreed to a two-year contract with the Bengals. The team said he'd remain head coach through the 2019 season.

ESPN reported Sunday that Lewis will leave Cincinnati after this season, but Lewis disputed those claims at a post-game conference. If ESPN’s report holds true, we took a look back at how Lewis reshaped the Bengals and what we’ll miss about him at the helm.

CINCINNATI -- For better or worse, one thing is certain about Marvin Lewis once he wraps up this, his final season, as Cincinnati Bengals as head coach: There will be plenty for which to remember him. Fifteen seasons as an NFL head coach is unheard of and it's given Lewis plenty of time to accumulate stats, successes and failures.

Here are nine things for which we will remember Marvin Lewis as Bengals coach:

The top item on Lewis' Bengals legacy will be an inability to win a single playoff game. The Bengals were 0-7 in the postseason during his tenure. And many of those losses will stick with fans forever, such as a penalty meltdown at the end of a 2015 Wildcard game that the Bengals had all but won and quarterback Carson Palmer blowing out a knee against the hated Pittsburgh Steelers in a 2005 game.

In fairness, Lewis isn't alone in playoff futility among Bengals coaches. The team hasn't won in the postseason in 27 years, so it had been a problem since well before he became head coach.

The Bengals might not have won a playoff game in his tenure, but Lewis certainly did better than his predecessors when it came to getting there. The team made the postseason seven times in his tenure, including four division championships and five straight appearance from 2011-15.

He also managed six seasons of 10 or more wins, and 10 of his 15 seasons were .500 records or better. To put that in perspective, none of the Bengals' previous three head coaches -- David Shula, Bruce Coslet or Dick LeBeau -- ever won more than seven games in a season.

Lewis' longevity and the aforementioned winning seasons have allowed him to easily be the franchise's all-time winningest coach, with 123 wins, 111 losses and three ties heading into Sunday's game against the Minnesota Vikings. That gives him just more than twice the next-closest coach -- Sam Wyche with 61.

But it's not just a product of a long tenure. Lewis' winning percentage ranks third all-time among Bengals coaches at .525. Forrest Gregg, .561, and Bill Johnson, .545, are higher but with only 90 total games coached, combined.

You can look at the glass half full (team's winningest coach) or half empty (playoff ineptitude) with Lewis, but you can't deny that the team's bitter rival, the Pittsburgh Steelers, have had their way with Marvin's teams. The Steelers hold an 8-24 record against Lewis, including knocking the Bengals out of the playoffs twice in that span.

Maybe most painful was former Bengal Kimo von Oelhoffen rolling into Carson Palmer's leg in the 2005 playoffs and knocking him out of the game. The latest chapter of the matchup this season epitomized the series -- with players being carted off the field from hard hits and the Steelers coming back to win in the fourth quarter.

An unfortunate negative of the Marvin Lewis Bengals has been players behaving badly on and off the field. Media databases used to document NFL player arrests show that since 2000, the Bengals have had 44 arrests -- third-most in the league over that span. Two of those years don't fall under Lewis' watch, but 15 do. Run-ins with the law by Bengals such as Adam Jones, Chris Henry and Cedric Benson received much negative publicity over the years.

There have been other image-damaging incidents over the years -- from Vontaze Burfict's many fines for illegal hits to Chad Johnson's silly hijinks to the team's controversial drafting of Joe Mixon this past year after a video surfaced of Mixon punching a woman.

Marvin will always be associated with these incidents.

If Lewis must carry the stigma of all the negative things for which his players were responsible, then he also should get credit for his stars.

There definitely have been positives to counter the negatives when it comes to players in the Marvin Lewis era.

Through the stretch of playoff years, the Bengals have had plenty of bona fide stars. Carson Palmer, Rudi Johnson, Chad Johnson, T.J. Houshmandzadeh, A.J. Green and Geno Atkins are some of those who've been among the best in the league at times.

While no one will be mistaking that with the Bill Walsh coaching tree -- Jackson, Joseph ad Gruden might all be on the hot seat -- it is impressive for one coach to spawn that many head coaches. And Zimmer has proven to be one of the better head coaches in the league this season.

Losing all of that talent very well could have something to do with the Bengals' woes the past two seasons.

Doing it much on his own

Say what you want about Lewis' successes and failures on the field, no NFL coach has had to operate as he has in the past 15 years. The Bengals don't employ a scouting system or front office quite as robust as other NFL franchises. Lewis hasn't had a John Schneider like the Seahawks or Ozzie Newsome like the Ravens orchestrating front-office moves and draft strategies. Director of Player Personnel Duke Tobin has done nice work, but Bengals owner Mike Brown also serves as general manager.

That the Bengals have had as many winning seasons that they have under Lewis is a testament to his coaching and leadership. It will be interesting to see if the dynamic changes with the next head coach.

Lewis has always been somewhat surly with the media, often giving vanilla responses and never showing a colorful personality or saying anything very earth-shattering. But he has shown a lot of compassion for his players over the years, seemingly acting as a father figure to those who have run into trouble.

More importantly, his Marvin Lewis Fund has become a high-profile charity during his time here, stressing youth education and heavy in community involvement with camps and clinics. The fund's website says it has raised $11.6 million since 2003. Whether fans liked Marvin as a coach or not, that should appreciate that commitment to the community.