Fay: Could one of Lewis's coaching proteges succeed him with the Bengals? 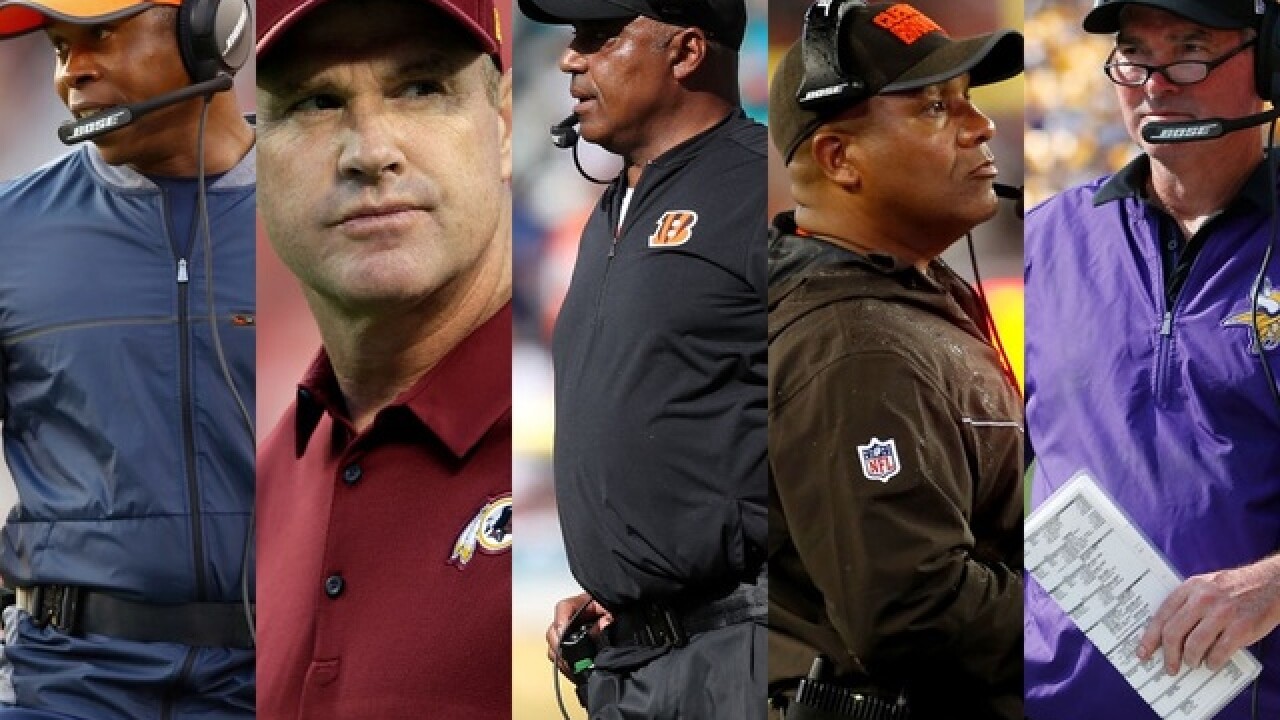 CINCiNNATI -- For a guy who's never won a playoff game, Marvin Lewis has quite the impressive coaching tree.

Five coaches who worked under Lewis with the Bengals have gone on to head coaching jobs. Four are active: Washington's Jay Gruden, Cleveland's Hue Jackson, Minnesota's Mike Zimmer and Denver's Vance Joseph. The fifth is Leslie Frazier, who preceded Zimmer at Minnesota.

Joseph will be the latest to face Lewis when the Bengals go to Denver Sunday for 4:25 p.m. game.

Part of the reason Lewis has so many former assistants who ended up with top NFL jobs is longevity: Lewis is in his 15th season with the Bengals. However, a long tenure doesn't always guarantee a lot of branches on the old coaching tree.

New England's Bill Belichick, five-time Super Bowl winner and the only head coach with more tenure in the NFL than Lewis, has only had four coaches from his staff end up as NFL head coaches. Houston's Bill O'Brien is the only active one.

So Lewis's proclivity for producing coaches is a little hard to understand, but it's relevant because his replacement could come from his tree. Owner Mike Brown tends to hire people who have spent time in the organization; Lewis and Forrest Gregg are lone exceptions.

In fact, Lewis tried to convince Jackson, one of his best friends, to stay rather than go to Cleveland, tempting him with the promise that Jackson would one day be the Bengals head coach.

"I thought it gave me the right opportunity and the right fit for me," Jackson said before his first game against the Bengals as Browns coach. "Obviously, I'll always be indebted to the Bengals, but I'm where I'm supposed to be right now."

Lewis should get credit for his impressive coaching tree, but it has to do more with hiring the right guy to start with than a particular talent for developing coaches.

Gruden is the only one who got his big break with the Bengals. He was coaching indoor football when Lewis hired him to his first NFL coordinator job. Gruden delivered. The Bengals were seventh, sixth and third in the total offense in his three years.

Zimmer had eight years of experience as a defensive coordinator by the time Lewis brought him in 2009. He was very good with the Bengals. They ranked fourth, 15th, seventh, sixth and third in the his years as DC.

Jackson also had a long coaching resume when the Bengals hired him made him as offensive coordinator in 2014. They slipped to 22nd from third in total offense in his first year. After they finished 11th in 2015, Jackson left to take the head coaching job in Cleveland.

Joseph was another guy with a long record as an assistant as well as head coaching experience on the college level when he got to the Bengals. He spent two years as defensive backs coach ('14 and '15) before leaving for Miami, where he was defensive coordinator last year.

His first year with the Broncos has been a bit rough. Denver started 3-1 but has lost five straight going into Sunday.

Lewis has great respect for his former assistant.

"Vance is a very detail-oriented coach," Lewis said. "He has a great ability to communicate with the players. He has a tremendous knowledge of football overall. He played quarterback in college at Colorado, so he's very well-rounded. Very good coach."

Of the coaches who went from the Bengals to running their own show, all have struggled for sustained success with the exception of Zimmer.

Gruden is 25-31 with the Redskins with one playoff appearance.

Jackson's lack of success in Cleveland is well-documented. The Browns are 1-26 under him.

Zimmer is 33-24 with the Vikings. He's 7-2 this year and seemingly headed for a second playoff berth in three seasons.

By the way, all members of Lewis coaching tree have something in common with Marvin: None has won a playoff game. Gruden, Frazier and Zimmer are all 0-1.

So, if the Bengals make a move with Lewis and are looking to upgrade, it might be a good idea to look beyond the tree.