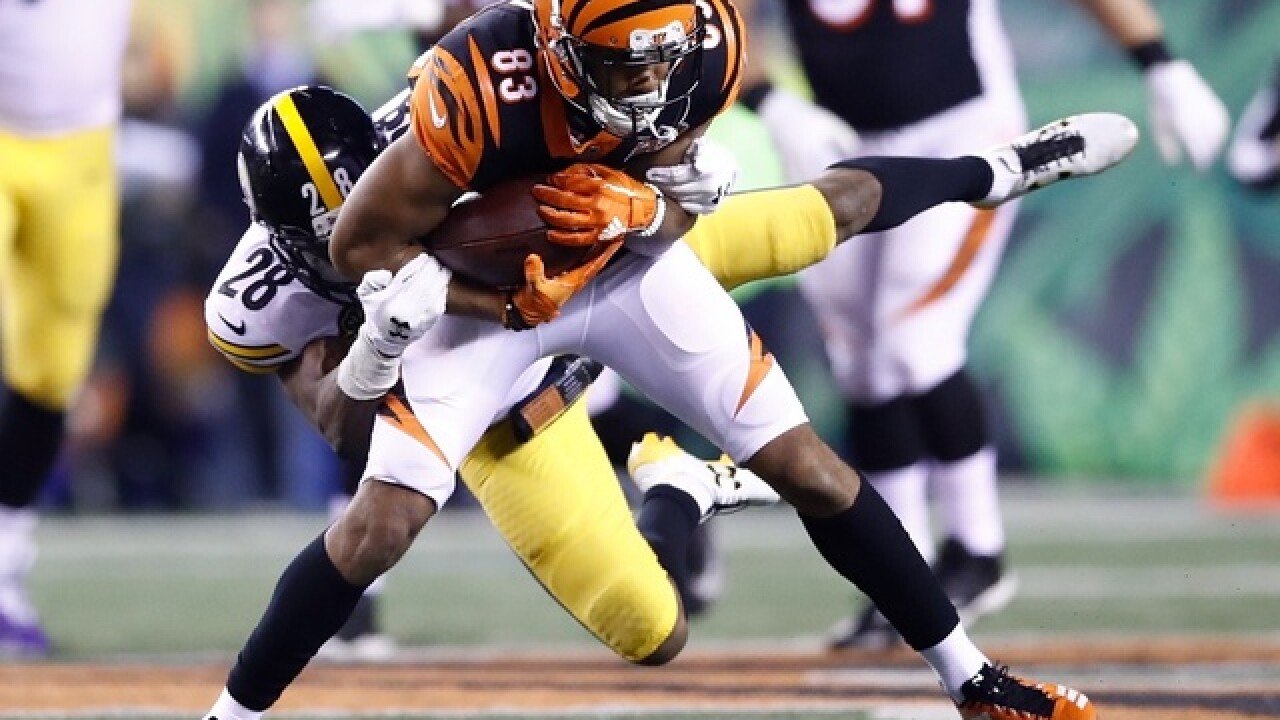 Copyright 2017 Scripps Media, Inc. All rights reserved. This material may not be published, broadcast, rewritten, or redistributed.
Andy Lyons
<p>CINCINNATI, OH - DECEMBER 04: Tyler Boyd #83 of the Cincinnati Bengals is tackled by Sean Davis #28 of the Pittsburgh Steelers during the first half at Paul Brown Stadium on December 4, 2017 in Cincinnati, Ohio. (Photo by Andy Lyons/Getty Images)</p>

CINCINNATI -- Call it Marvin's Law: Anything that can go wrong will go wrong when Marvin Lewis sends his Bengals team against the Steelers. He came into Monday 8-23 against the Pittsburgh team.

The Bengals blew a 17-point lead, set a franchise record with 173 yards in penalties and generally imploded in a 23-20 loss to up-the-river rivals on a rainy night before a crowd of 56,029 at Paul Brown Stadium.

"We needed to make critical plays to win the football game," Lewis said. "We didn't do it."

It was a brutal game, even by NFL standards. Two players were take off on backboards after hits left them motionless on the turf. Pittsburgh wide receiver JuJu Smith-Schuster got an unnecessary roughness and taunting penalty for his hit that put Vontaze Burfict out of the game.

The Bengals weren't upset about that -- they were steamed about the result.

This was a game the Bengals had to win to salvage the season. That should bring the best out in a team. And it did in the Bengals for the most of the half. They played nearly perfect game to build the 17-0 lead.

It slowly slipped away from there. This didn't have the suddenness of the meltdown in the 2015 Wild Card Game. This was a slow demise. Death by dozens of mistakes, penalties and missed chances.

Biggest drive of the year for Bengal offense.

Drop by A.J. Green on first down.

Eight-yard run by Giovani Bernard on second down.

Andy Dalton sacked on the third down.

You knew it was over over then. The Steelers methodically drove it to the 27. Chris Boswell ended it with a 38-yard field goal with four seconds left.

"We had it," Green said. "We played well in the first half. The second half, I didn't make enough plays. It comes down to me. I've got to make that catch."

It was a stunning loss even by Bengals-Steelers standards. When you're up 17-0 with 32 seconds left in the half, you have to do a lot of things wrong to lose.

"You can blame it on a lot of things," Dunlap said. "The bottom line is, we're not finishing football games. We ain't doing what it takes to win. That has to end right now. Right now. We have to make a stand. We're letting it roll.

"We have to make a stand. We made a lot of great plays today, but what do we have to show for it?”

A 5-7 record with four games to play.

In other words, the season is over. The players and Lewis talked about righting things for next week against the Bears, but with another disappointing season all but sealed, you have to wonder about Lewis' future. His contract is up after this year. When you can't beat the Steelers, it makes winning the division tough.

Monday's loss was the Bengals' eighth in the last nine meeting with the Steelers.

It began to go south with 35 seconds left in the first half. The Bengals had stifled the Steelers to that point, but they let the Steelers go 71 yards in three plays to get a field goal on the last play of the half.

The slide continued after half.

"I thought he went out," said William Jackson, who could have pushed Bell out.

When a Giovani Bernard holding penalty wiped out a 61-yard A.J. Green catch, you started to think: Here we go again.

The Bengals recovered enough to get a field goal to make it 20-10.

The Steelers went for it at their own 37 with 12:39 to go. Bell got it easily. Still, the Bengals held the Steelers to a field goal.

That's where the offense failed. The Bengals went three-and-out.

The Steelers took over at their 20. On the third play of the drive. Smith-Schuster leveled Burfict with a blindside hit. The game stopped for five minutes or so while Burfict was attended to. The penalty made it second-and-16. Five plays later, the Steelers were in the end zone on 6-yard TD catch by Antonio Brown.

The killer three-and-out followed. When the Steelers took over with 2:42 to go at their own 41, everyone watching knew how it was going to end.