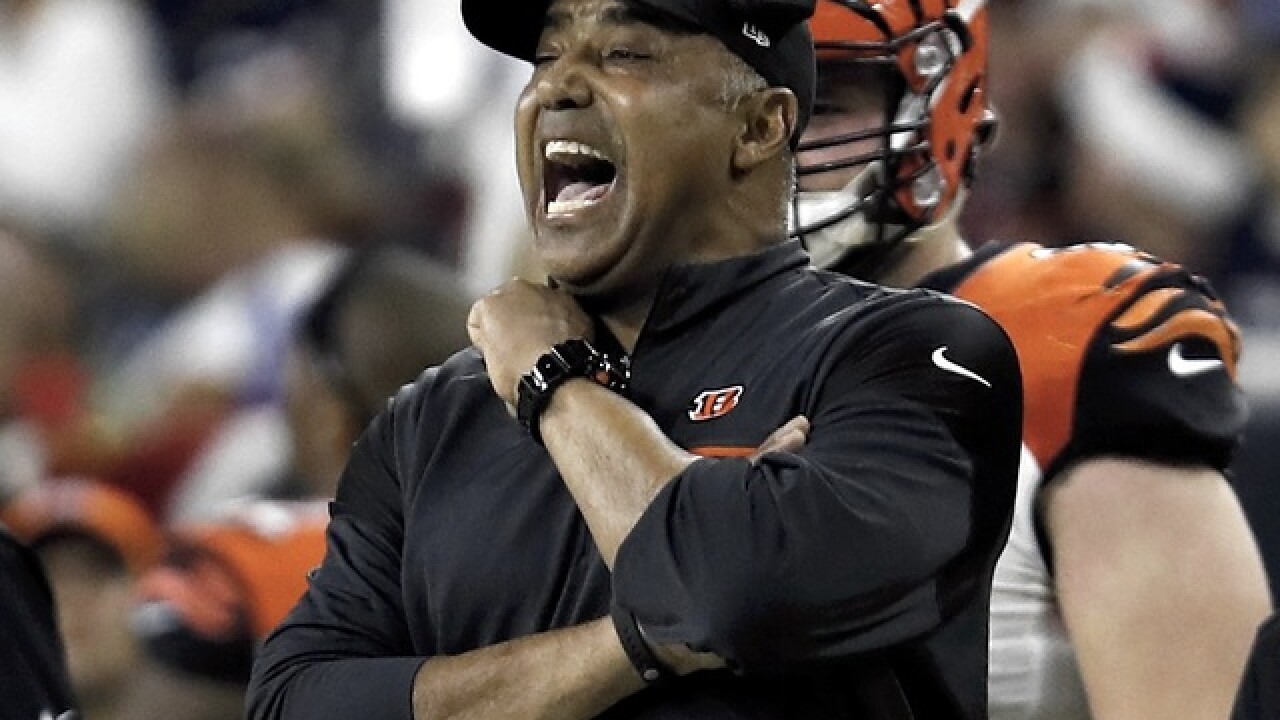 Image copyright 2017 Getty Images. All rights reserved. This material may not be published, broadcast, rewritten, or redistributed.
Tim Warner/Getty Images
<p>HOUSTON, TX - DECEMBER 24: head coach Marvin Lewis of the Cincinnati Bengals yells from the sideline during the game against the Houston Texans at NRG Stadium on December 24, 2016 in Houston, Texas.</p>

CINCINNATI -- A report says Marvin Lewis is moving on after the next three games. This should come as a shock to no one.

Lewis disputed those claims at a post-game conference Sunday, shrouding news his departure in uncertainty.

My first reaction when reading the report from ESPN's Adam Schefter was, OK. His departure was just a matter of time.

Anytime a coach enters a season without a contract past that season, it usually means quitting time is coming soon. Usually.

Lewis, of course, played the game this way once before and agonized over the post-2010 decision to return for another roundup. He wound up taking the Bengals on a five-consecutive-season playoff run. It was a curse for Lewis, and a blessing.

The curse of course was his inability to lead his Bengals teams to a payoff win. Seven times, he took a team to the playoffs. And, well, you know the rest of that story. He was either Kimo'd, or his teams were overwhelmed or they simply melted down.

Unfortunately for Lewis, who dragged the Bengals from the abyss of professional football to respectability, will always be identified in Cincinnati with his inability to coach one of his teams to a playoff win.

COLUMN: Will Bengals go the way of post-Dusty Reds?

That, and the seemingly endless stream of player arrests that have dogged the Bengals as late as this past offseason. Cedric Benson, Chris Henry, Odell Thurman, Adam Jones. It seemed like the 2006 Bengals team picture had a permanent place on the post office wall. The Bengals of Marvin Lewis were an easy punchline for every late night comic.

But here's what Lewis did, that few of his predecessors could: He brought the franchise out of the dark ages and into at least the 20th century.

Sam Wyche quit, or was fired depending on whom you want to believe, because he saw the franchise unwilling to play the emerging free agent game. Dave Shula, overwhelmed as a head coach, watched a front office control his every move. Or allowed it to happen. And when Mike Brown began rounding up the band for an encore, we got Bruce Coslet and Dick Lebeau, who got little from the front office in tangible support.

Except for a steady paycheck. Bengals coaches got that, at least, from Brown.

But where were the players? Where was the scouting, a bona fide general manager or scouts? The Bengals front office insisted on playing modern day football warfare with medieval weapons. Leather helmets in an age that worried about concussions.

In a large way, Marvin Lewis got caught up in that wash. It wasn't until 2011, after another disastrous season and with his starting quarterback who'd rather retire than play again for the Bengals, that Lewis got any sort of control over his product.

The offensive coordinator he was forced to inherit, Lewis finally got to replace. He asked for more personnel in the front office, demanded it really as a condition to returning. And he got that. A little bit at least.

But operating in the same division as the definitive franchise in the NFL, the Steelers, the Bengals were never really competitive. Even in that five-year playoff run, no one ever considered the Bengals a legitimate Super Bowl contender.

Marvin Lewis chose to lie in that bed. No one forced him to. And eventually, everyone wants to buy a new mattress. That's apparently where Marvin Lewis is in his life right now.

He reportedly wants to seek out other NFL head coaching jobs. He'll be a legitimate candidate for the five to seven jobs expected to open after this season. He reportedly will check out opportunities in front offices around the league.

Lewis is well-connected with the NFL and its owners, by virtue of his position on the NFL's competition committee. He also is considering going to work as an "adviser" for some of his former assistant coaches who now are NFL head coaches. That's a diminishing list. Vance Joseph is looking like one-and-done in Denver. Jay Gruden works for Dan Snyder in DC, where any head coach is day-to-day at best. And if anyone thinks Hue Jackson is coming back to preside over that disaster in Cleveland, despite what the owner there is saying publicly, those people and reality are going in separate directions.

Regardless of whom replaces Lewis -- and Mike Brown would be well-served to look outside the country club of assistants he now employs, much as he did when he hired Lewis -- the new head coach will face many of the same challenges that Lewis did.

It's widely known the Brown family has tremendous input into which player is taken in the first round of every NFL draft. Have you seen how that's gone in the last few years? Tight end Tyler Eifert has been hurt more than available. Dre Kirkpatrick arrived hurt from Alabama and took more than two years to learn the game at the NFL level. Darqueze Dennard took the same amount of time. Tackle Cedric Ogbuehi has been a whiff. William Jackson III missed his entire rookie season, hurt, and is still learning the game. And John Ross had all of the appearance of a player Lewis didn't want in the first place. His offensive line was falling apart, and he got a wide receiver who's now had more surgeries in his rookie season than pass receptions.

Lewis's team was like a car that needed a brake job and opted instead to get a paint job. You win a lot of ways in the NFL. But you can't win unless your first-round picks have an immediate impact. Period.

Bengals defensive coordinator Paul Guenther, a Brown family favorite, will get a look. The players like him. But what the Bengals need more than likeability is a coach who can come in with fresh ideas, someone who has coached on the offensive side of the game. If you haven't noticed, the NFL is all about offense. And lately, the Bengals have not.

Marvin Lewis will be just fine. And rather than spend today capping on him for his lack of playoff wins, or his questionable coaching decisions, or his clock management, take a moment to remember what the Bengals were like before he got here, before he got the control that almost every other NFL head coach has from day one.

Then wish the next guy good luck. He'll need it.