Some in riverside communities escape flooding with little to not damage; others not sure yet 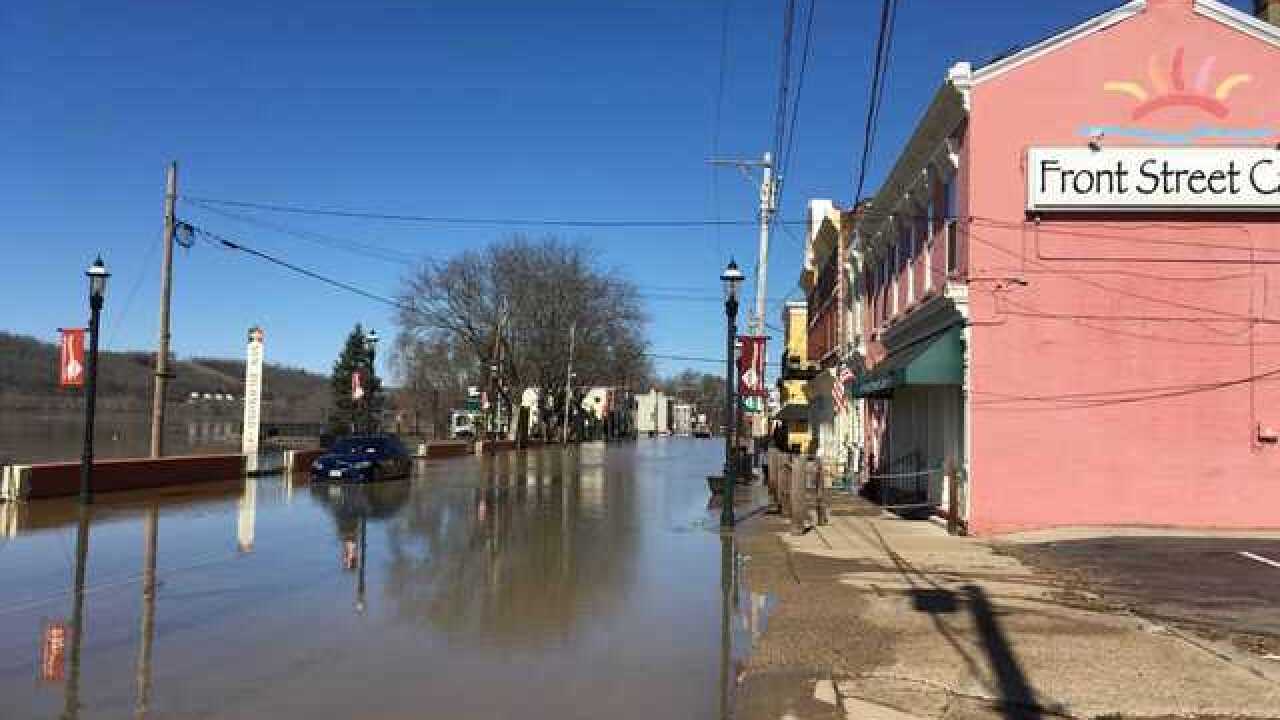 When he stopped into his business, Front Street Cafe, he didn't see any water damage Monday. Most of Main Street was still covered with water, and it has lapped at the doors of many businesses.

"We were just that close and really fortunate, and other people in the community are not as fortunate, and we will be helping them out to the extent we can as well," he said.

The Ohio River, a scenic but sometimes menacing neighbor, crested Sunday night and has been slowly receding. That meant people in this Clermont County village, and riverside communities all around the Tri-State, shifted their focus from clearing out to cleaning up.

Down the street from Lees' cafe, Patrick Blair unloaded kerosene heaters he'll use to dry out his business, the Old Time Ice Cream and Candy Store. He's been in business 11 years and hopes to open for the season by April 1.

The power was still out, which made the job more challenging.

The river got up to the front door of another neighbor, the Green Kayak Grille & Pub. Everybody in town, high school students to village leaders, helped owner Jim Comodeca move his restaurant's supplies out of the water's way.

He's not sure yet what damage he might have.

"It's definitely an inconvenience," Comodeca said, "but that's life on the river. That's sort of what we signed up for."

For now, Village Administrator Greg Roberts hopes the looky-loos stay away: There's too much work to have outsiders hanging around just to get a peak at other people's misery.

"Come back when the river is back in its banks," he said. "It's just as beautiful when it's smaller."

Village schools will be closed again Tuesday. In many places, buses can't run their routes because roads remain flooded. Crews from the Ohio Department of Transportation, Clermont County Engineer's Office, and local road and service departments will clear the way as water recedes.

New Richmond Schools Superintendent Adam Bird hopes students will help out their neighbors, and the district is helping to organize community service events. Safety is the top priority, he said: The water needs to get low enough for students to enter.

"We send kids down to the village to help clean up. We're going to do that with teams --- maybe the football team is going to go down ... our student council -- different groups and their advisers will go together," he said.

Downriver in Aurora, Indiana, Gov. Eric Holcomb thanked firefighters who spent the weekend keeping their community safe. Dearborn and Switzerland are among the counties where Holcomb has declared a disaster. The governor flew above the flooded areas Monday to get an idea of how widespread the damage really was.

Nancy Ray and her husband had a front-row seat to it all. She bought her house in July to keep it in her family after her father died; he'd built it in the same spot as the house he grew up in.

Ray spent a fitful night trying to keep drivers at bay; some just ignored the barricades near her home. She spotted one man who got stuck in more ways than one: his car was in the water, and he was in jai.

"I've had no sleep for two weeks, watching water," she said. "I've never watched so much water in my life."