Could the Cincinnati Bengals have a repeat of the 1988 season? 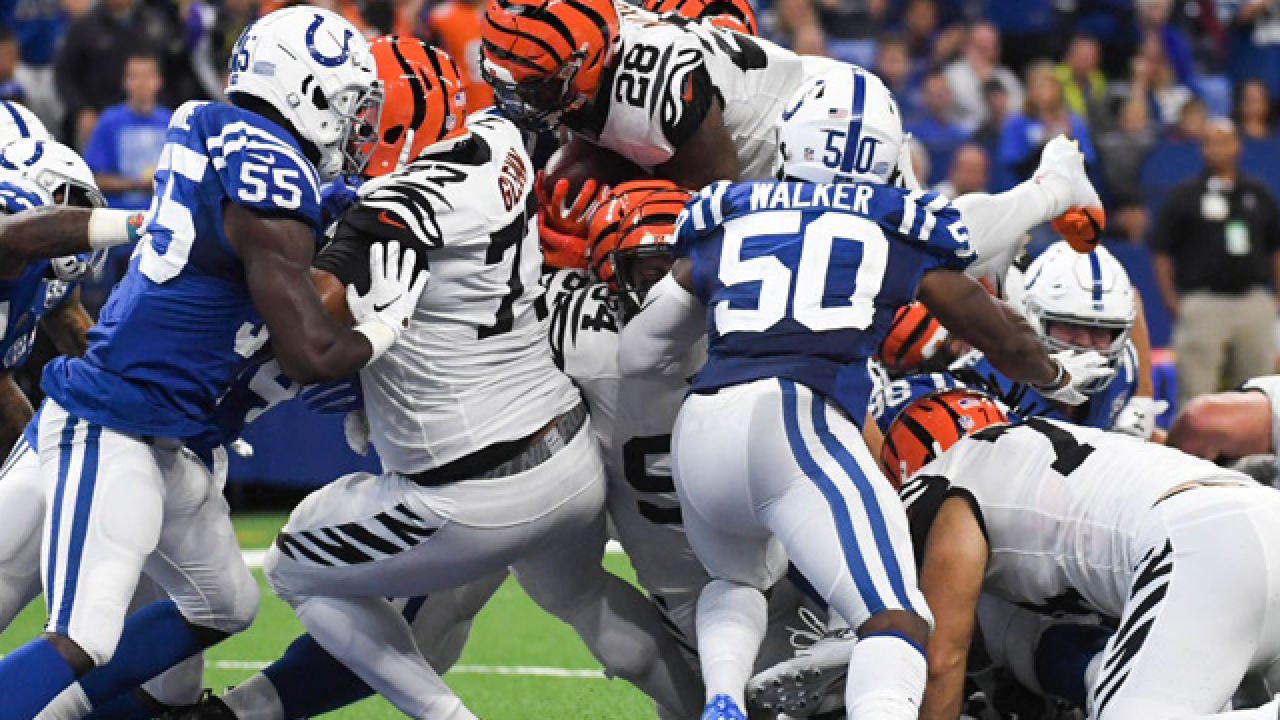 Copyright 2018 Scripps Media, Inc. All rights reserved. This material may not be published, broadcast, rewritten, or redistributed.
<p>INDIANAPOLIS, IN - SEPTEMBER 09: Joe Mixon #28 of the Cincinnati Bengals dives for a touchdown in the game against the Indianapolis Colts at Lucas Oil Stadium on September 9, 2018 in Indianapolis, Indiana. (Photo by Bobby Ellis/Getty Images)</p>

CINCINNATI -- So when the Cincinnati Bengals went down 23-10 in the third quarter at Indianapolis, you knew you had been right in January.

You knew Mike Brown had gravely erred when he brought back Marvin Lewis as head coach for 2018. You knew that Lewis’ third straight season without a playoff berth – and more importantly, his NFL-record 16th straight without a playoff win – was well underway.

But who knew the Bengals would put a 24-0 smackdown on the Colts the rest of the way? Who knew that for the first time in 14 years, they would win on the road after trailing by 13 points or more in the second half? It hadn’t happened since Dec. 5, 2004, at Baltimore.

ANALYSIS: Bengals learn to make up for their mistakes

Well, no one knew, of course. But someone with a nose for history could have at least suspected it, particularly given the clearly dominant public sentiment that the Lewis era should have ended with last year’s 7-9 finish.

Someone might have had an inkling because prior to this year, the last two times the Bengals brought back a head coach and found almost everyone considered it a worse idea than bringing in a new one, the team responded with a fantastic year.

And in each of those seasons, just like Sunday in Indianapolis, the Bengals won their opener after trailing in the second half.

In 1988, beleaguered coach Sam Wyche took the Bengals to within 34 seconds of a Super Bowl win, for goodness sakes. But the fans had wanted Wyche fired after 1987, and media generally agreed it was warranted. Wyche had missed the playoffs with his first four teams, and the ’87 edition’s 4-11 performance was even uglier than the record. Wyche’s helmsmanship had been seen as most erratic as the team endured a contentious campaign marked by a three-game, league-wide players’ strike.

But Paul Brown – Mike’s legendary Dad -- spat in the wind of public opinion. He called the 1987 campaign an “aberration,” and he honored the final year of Wyche’s five-year contract. The team went on to go 12-4 in supremely entertaining fashion, as quarterback Boomer Esiason became a hero and Wyche was proclaimed an innovative game-changer. The team rolled to two playoff wins, surviving a terribly mistaken league initiative to shut down Wyche’s “no-huddle” offense (an exceedingly bold concept at that time). And though Cincinnati lost the Super Bowl to San Francisco, the 20-16 nailbiter was proclaimed by Commissioner Pete Rozelle as the most exciting contest in the game’s then-23-year history.

The Bengals began 1988 by beating the then-Phoenix Cardinals 21-14 at Riverfront Stadium, overcoming a 14-7 third-quarter deficit before preserving the win with a goal-line stand.

The team had a bushel-basket of seemingly veteran standouts, but it went 4-12, including a 10-game losing streak. That streak still ranks today as one of only two Cincy skeins that long within a season. The veteran atmosphere turned toxic, led by the worn-out act of Chad Johnson and the reliably cancer-causing Terrell Owens, and it was widely assumed that Lewis and Brown would agree to part company. Though Lewis had brought the Bengals a long way from the disaster years of 1991-2002, he had only two playoff berths and no playoff wins to show for eight seasons.

But darned if Brown and Lewis didn’t agree on a new deal. And even after quarterback Carson Palmer subsequently refused to honor his contract for 2011, dealing the franchise a massive embarrassment, Lewis somehow guided the team back to the playoffs.

The 2011 club wasn’t great, but 9-7 seemed like heaven to a fan base that had been told by most analysts to expect another 4-12 season or even worse. Rookie quarterback Andy Dalton cured the Palmer sickness like a wonder drug, and rookie wide receiver A.J. Green marked himself as a future Hall of Famer.

So overall, if you choose to suddenly decide that the 2018 Bengals are bound for glory after all, the historic parallels are there. And history aside, the details of the 34-23 win at Indy could certainly fuel optimism.

RELATED: Flying Pigskin: Cincinnati Bengals comeback to win 34-23 against the Colts in Indianapolis

New defensive coordinator Teryl Austin comes with a track record of forcing turnovers, for a team that had a measly 14 all last year. And Austin’s unit provided dramatic steals early and late. Linebacker Preston Brown’s first-quarter interception erased a bad Bengals giveaway, while safety Clayton Fejedelem’s 83-yard TD return of his own forced fumble put the clincher on the win.

A breakout year for second-year running back Joe Mixon? Why not? Mixon rushed 17-for-95 with a touchdown and caught a very nice five-for-54.

Dalton weathered early frustration and was the leader he’s supposed to be. He completed three-fourths of his passes (21-for-28), and the NFL’s computer awarded him an excellent 109.7 passer rating. Dalton also saved an early TD, following his lone interception, with a hard-nosed tackle to end the play.

Nobody’s saying this team is great, and Thursday provides a home test against Baltimore, which destroyed Buffalo 47-3 in its opener. But if the Bengals go on to have a great year, it won’t be the first time, or even the second, that they’ve done it with a head coach that Bengals Nation wanted gone.