Honoring the Cincinnati Bengals 1988 team: How they went from last place to the Super Bowl 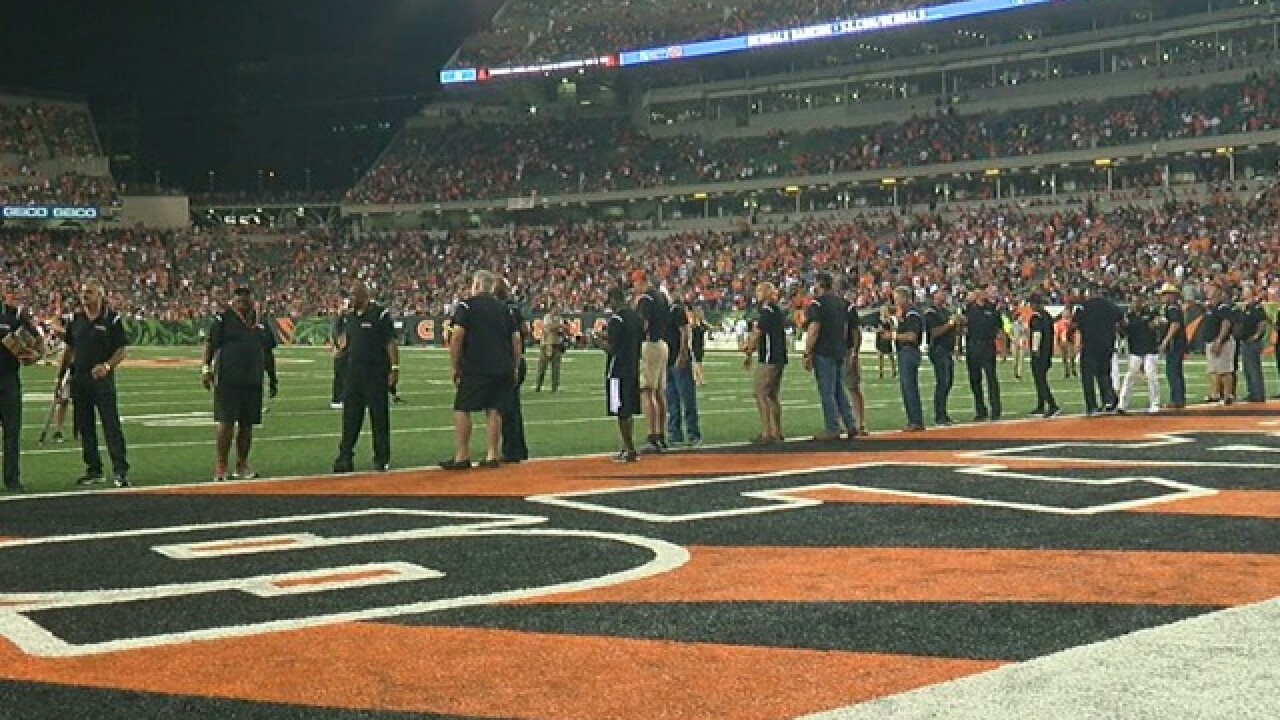 Copyright 2018 Scripps Media, Inc. All rights reserved. This material may not be published, broadcast, rewritten, or redistributed.
<p>At halftime of Cincinnati's game against the Baltimore Ravens on Thursday, Sept. 13, 2018, more than 45 players and coaches from the Bengals’ 1988 AFC Championship team were honored at Paul Brown Stadium.</p> 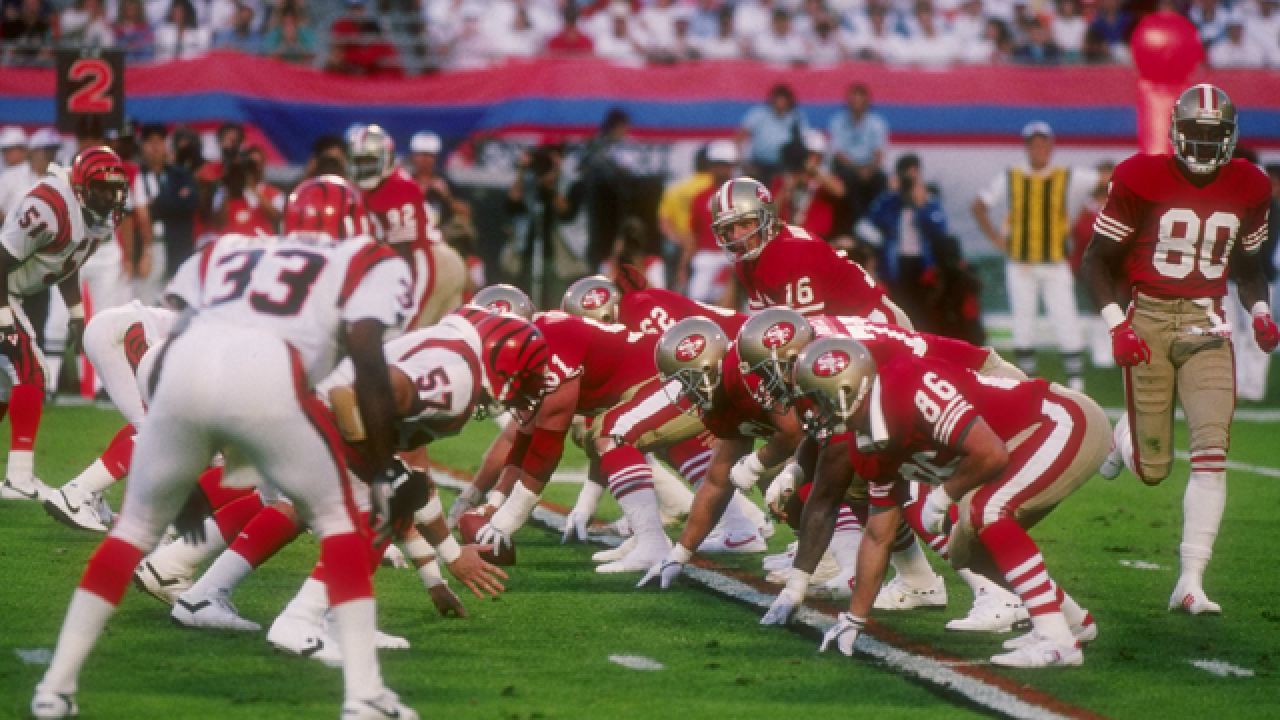 CINCINNATI – Three decades have passed, but the memories remain fresh.

Hair has greyed for some, physiques have been altered by age, but the bond the 1988 Cincinnati Bengals players still share from that magical season is timeless.

When the stories are retold, and laughter reigns, it’s almost like they are back in the home locker room at Riverfront Stadium.

“Of course, we all look different, there’s a lot of time that has passed,” said NFL Hall of Famer Anthony Munoz. “But you pick up right where you were, ripping on each other, messing with each other. There was a special bond on that ’88 team and you still feel it.”

At halftime of Thursday night’s game against the Ravens, more than 45 players and coaches from the Bengals’ 1988 AFC Championship team were honored, in the city where they captured hearts – and shattered a few – during that memorable year.

The 1988 Bengals are a product of their experiences, which are exhilarating and at the same time tragic. The Bengals had one of the greatest turnarounds in NFL history that season, going from 4-11 in 1987 to 12-4 in 1988, from last place to the Super Bowl.

RELATED: Could the Cincinnati Bengals have a repeat of the 1988 season?

To this day, the Bengals players credit head coach Sam Wyche for making it possible, not just for his offensive ingenuity but also for the culture he helped foster.

During training camp, Wyche decided to assign roommates a little differently. Munoz, who previously roomed with fellow offensive lineman Max Montoya, was paired with linebacker Leo Barker. Munoz, a Mexican-American, and Barker, who hailed from Panama, both spoke Spanish, but the familiarity ended there.

“It goes across racial lines, it goes across position lines, goes across offense and defense,” Munoz said. “All the linemen used to hang out together. Now, I’ve got a linebacker. You give Sam a lot of credit for that. It was a genius move on his part.”

Stanford Jennings, an African-American running back, roomed with quarterback Boomer Esiason, and so on.

“That was kind of the model for it, Boomer and I,” said Jennings.

Wyche, who was prevented from attending Thursday’s festivities due to Hurricane Florence, created a community without boundaries in the Bengals’ locker room in 1988.

“It was all about understanding what’s important for each other,” Jennings said. “You learn about their families, you know a little bit more about someone, you’re going to work a little harder for each other. It’s that type of collective bonding that happened.”

The players’ bond strengthened during an unusually long training camp that including an appearance in the Hall of Fame Game in Canton. The Bengals began the regular season 6-0 including a 17-12 win at Pittsburgh. They won four of their final five games, including a 20-17 overtime win over the Redskins to clinch the AFC Central title on the final day of the regular season.

Jim Breech kicked the game-winner in the finale, after Redskins kicker Chip Lohmiller’s bid to win the game caromed off the upright earlier in OT.

Misfortune returned for the Super Bowl, of course, as the Bengals lost running back Stanley Wilson to a drug relapse the night before the game and nose tackle Tim Krumrie to a devastating broken leg in the first quarter.

Despite facing a myriad of adversity, the Bengals led 16-13 on Breech’s 40-yard field goal with 3:20 left. But, the 49ers drove 92 yards in 11 plays as quarterback Joe Montana rewrote Super Bowl history with his game-winning touchdown pass to John Taylor with 34 seconds left.

“For someone who hates to lose as much as me, it still stings,” Munoz said. “Every time I watch that highlight, I hope that Taylor drops it and he keeps catching it.”

It was an epic Super Bowl that broke a string of super routs dating to the Bengals’ 26-21 loss to the 49ers in the 1981 Super Bowl. The five previous Super Bowls were decided by an average of 27.6 points. The entertainment value was little solace for Cincinnati.

The 1988 Bengals had a franchise record nine Pro Bowlers, and that didn’t include Ickey Woods who rushed for 1,066 yards and 15 TDs. His “Ickey Shuffle” touchdown dance made him a household name, despite an NFL career that encompassed barely two full seasons. Wyche was named NFL Coach of the Year in 1988. But, they fell short of a title.

“We got to the goal, but we didn’t complete it,” Munoz said.

The highlight of that Super Bowl and arguably the greatest moment in Bengals franchise history came in the third quarter when Jennings scored on a 93-yard kickoff return to put the Bengals ahead 13-6. Jennings wasn’t touched until 49ers’ receiver Terry Greer’s last-ditch attempt to bring him down around the five-yard line.

“It does kind of sneak up on you, when you think 30 years, especially with my daughter being born the day before,” Jennings said. “Every year when we celebrate her birthday, we realize how long it’s been.”

Kelsey Jennings turns 30 in January. That’s how long it has been.

Few would have predicted in 1988 that 30 years later, the Bengals would still be waiting for their next Super Bowl appearance. Munoz has been to the past 30 Super Bowl cities, although he doesn’t always attend the game.

“I’m tired of seeing black and gold,” Munoz said. “I’m tired of red, white and blue. I want to see some orange and black in the city I’m in.”

Thursday’s game-long celebration included highlights from the 1988 season, video messages and a halftime ceremony featuring the team. A special event was held on Wednesday night for 500 randomly selected season ticket members and their guests. The 1988 team members also signed autographs prior to Thursday’s game.

“You look at the closeness of this team, even now,” Jennings said. “There’s a true bond that’s with us all.”