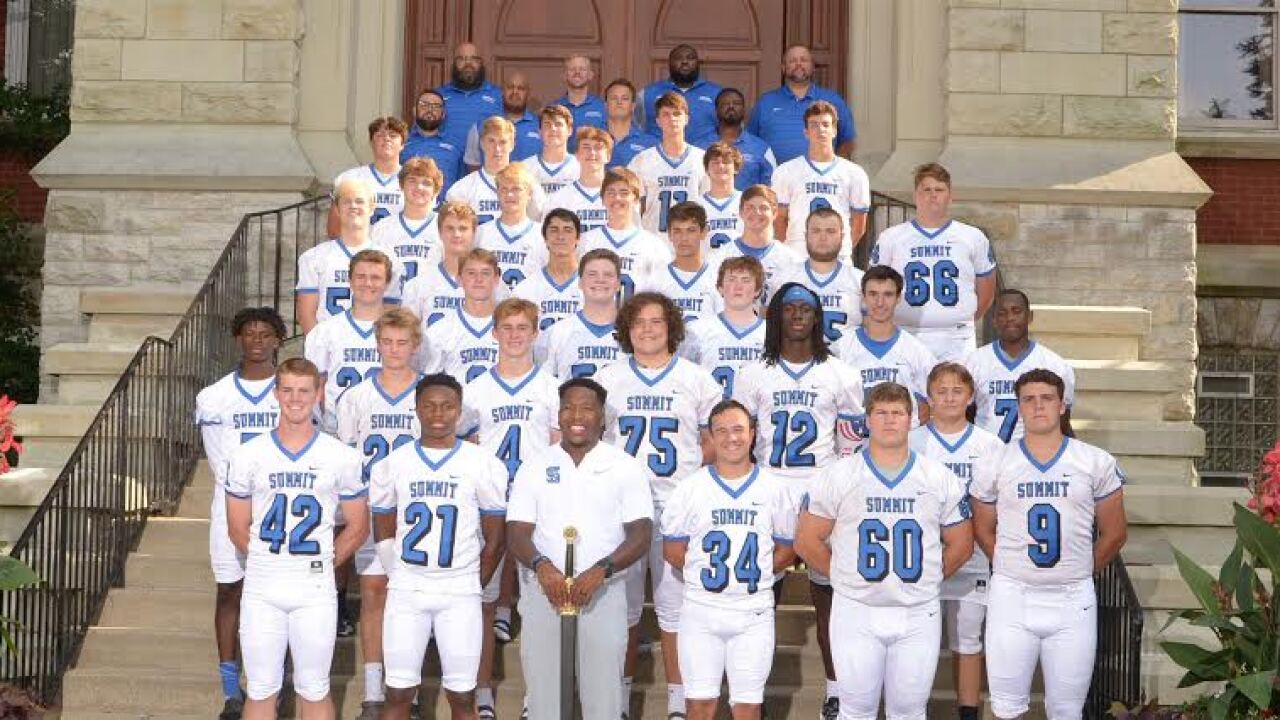 “My team has grit this year and knows how to come together,” Summit Country Day coach Justin Isaacs said. “When one guy is down, we pick him up as a family.”

Nearly a week after Patrice Tolble — the mother of senior wide receiver BT Tolble — was in a major automobile accident, the Silver Knights dedicated their week and their 42-41 double overtime road win to her Friday night.

“It was very emotional for everybody because she almost lost her life last Saturday (Sept. 28),” Isaacs said.

BT Tolble had a 30-yard touchdown reception including knocking over two defenders on his way to the end zone at the end of the third quarter. He also scored another touchdown in overtime, too.

Senior linebacker Jack McDowell was the lead defender in stuffing the play at the 1-yard line after Dayton Christian went for two in double overtime.

“My team never stopped fighting and believing in each other,” Isaacs said. “They were calm and relentless. My seniors showed huge leadership and it was an amazing team win.”

Catch him if you can: Fairfield junior running back JuTahn McClain rushed 22 times for 221 yards and two touchdowns in the Indians’ 20-14 win over visiting Lakota East. It was the 14th consecutive regular-season game in which the University of Kentucky verbal commit rushed for 100 or more yards. It was the second time he rushed for 200-plus yards this season and the fourth time in his Fairfield career. Fairfield (6-0, 4-0 GMC) is ranked No. 1 in the Division I, Region 4 computer points standings, according to Joe Eitel. The Indians play at Princeton (4-2, 2-2 GMC) Oct. 11.

Talking playoffs: Steve Shuck’s first postseason projections this season will occur next week. Shuck, the Greater Miami Conference commissioner, projects playoff qualifier in all seven division for WCPO. He has formally made the projections since 1996.

Another milestone for Kiner: Roger Bacon junior running back Corey Kiner had 16 carries for 209 yards and three touchdowns in the Spartans’ 48-0 win over visiting Purcell Marian. It was the 92nd time the two programs met on the field.
Kiner, rated the nation’s No. 6 running back in the 2021 class by 247 Sports, became the school’s all-time career rushing touchdowns leader (54). He passed Jerrett Dean (1999 graduate) Friday. Kiner needs just 71 yards to pass Dean for the most career rushing yards in program history. Kiner, who plans to visit the University of Louisville today, has 805 yards rushing and 13 touchdowns this season. Roger Bacon (5-1) plays host to Meadowdale (0-6) Oct. 11.

Cardinals continue to dominate: Colerain won its 79th consecutive GMC game with a 27-7 victory over visiting Sycamore. Junior quarterback Freddie Johnson had 142 yards passing and rushed for 113 yards and a touchdown in the game. Senior Jaylen Thomas had four receptions for 117 yards. Colerain (5-1, 4-0 GMC) plays at Hamilton (3-3, 1-3 GMC) Oct. 11.

Memorable performances: La Salle senior quarterback Zach Branam rushed for 253 yards and five touchdowns in the Lancers’ 41-20 win over Moeller in a game played at Princeton.
Branam tied the school record for the most rushing touchdowns (5) with former standout running back Jeremy Larkin, who reached that feat in games against Harrison and Olentangy in 2014, according to athletic director Brian Meyer.
La Salle had 510 yards of offense Friday night. Sophomore running back Gi’Bran Payne had 13 carries for 152 yards rushing and a touchdown. Senior linebacker Luke Thiemann had a game-high 10 tackles. The Lancers (6-0) play at Covington Catholic (7-0) Oct. 11.

Swarming defense: Harrison hasn’t allowed more than 10 points all season and that held true to form Friday night in a 42-7 win over visiting Talawanda.
“I just love our defense runs to the ball,” Harrison coach Derek Rehage said. “They just swarm the other team’s defense.”
Harrison had 440 yards of total offense. Senior quarterback Connor Kinnett threw for 312 yards and three touchdowns – the third time this season he’s thrown for 300-plus yards.
Senior wide receiver CJ Young had four receptions for 119 yards and two touchdowns. Junior wide receiver Levi Tidwell had four receptions for 113 yards.
"Levi, CJ and Connor have a special bond just all being seniors playing together for so long," Rehage said. "They just have amazing chemistry."
Harrison (5-1, 3-0 Southwest Ohio Conference) plays at Little Miami (5-1, 2-1 SWOC) Oct. 11. Senior quarterback Brody Reder threw for 206 yards and two touchdowns in the Panthers’ 31-21 win at Northwest.

Victorious Vikings: New Miami is 6-0 for the first time in program history, according to Vikings coach Jessie Hubbard. New Miami had 360 yards of offense in a 55-32 win over Cincinnati College Prep.
Junior fullback Dylan Spivey had 10 carries for 108 yard and two touchdowns. Junior running back Jordan Robinette had 10 carries for 71 yards and a touchdown. Junior quarterback Trey Robinette had three rushing touchdowns and was 4 of 4 passing for 119 yards and two touchdowns. Junior wide receiver Deanza Duncan had four receptions for 119 yards and two touchdowns. Defensively, junior linebacker Jerry Helton and junior defensive back Donovan Howard lead the team with nine tackles each. New Miami is No. 2 in the Division VII, Region 28 computer points standings, according to Joe Eitel.

College recruiting: The University of Akron offered a scholarship to Colerain senior defensive lineman Dontay Corleone Friday, according to Colerain coach Shawn Cutright. Corleone, who is 6 feet 2 and 285 pounds, also has an offer from UC.

The road to Canton: The OHSAA state football championship all-session tickets went on sale this week. The seven state finals will be played at Tom Benson Hall of Fame Stadium Dec. 5-7.
The schedule:

The championship game time assignments for each division will be announced on the OHSAA’s Twitter account at approximately 10:30 p.m. on Nov. 29 and Nov. 30, following the state semifinal games each night.

The OHSAA has not decided upon the state finals venue for 2020.