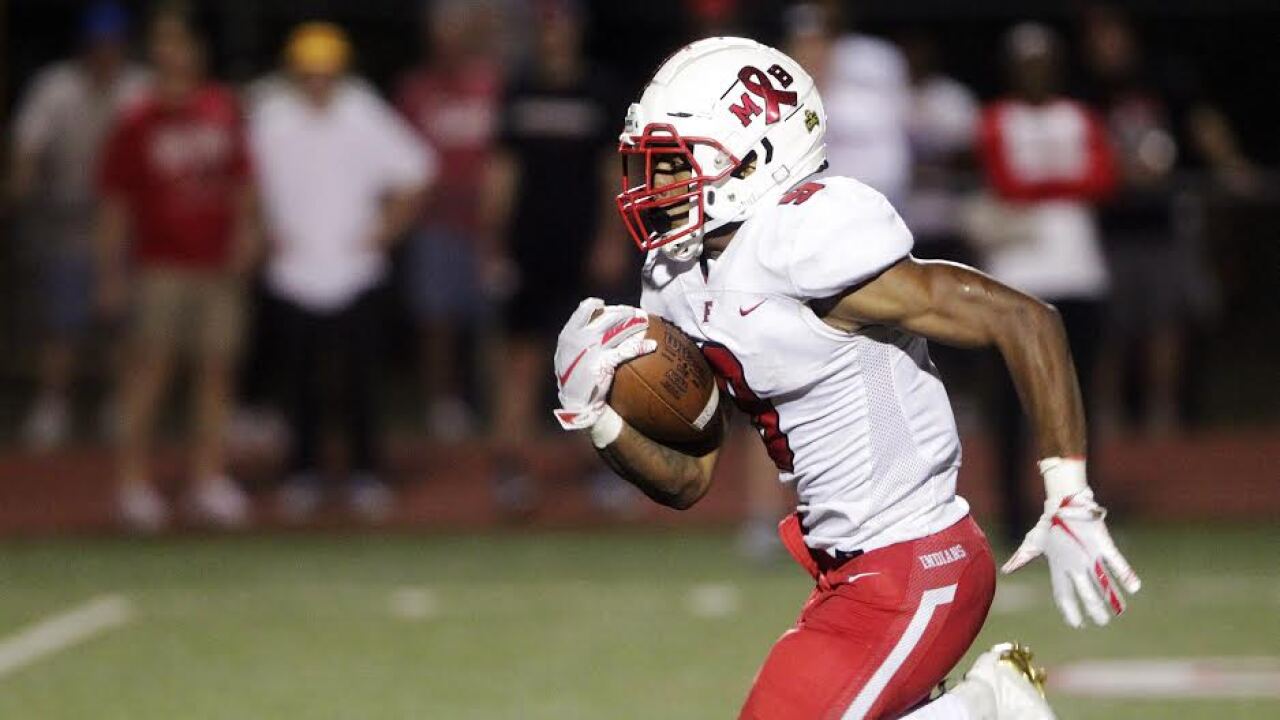 WEST CHESTER TOWNSHIP, Ohio — Standout running back JuTahn McClain’s eye-popping stats and electrifying touchdown carries are a sight to behold — even for the Fairfield offensive line blocking for him.

“It’s great,” senior offensive lineman Kody Hawkins said. “You give him a little bit of room and he makes magic.”

“I’m having so much fun especially with the best student section in the nation right here,” McClain said. “It’s the best crowd we can ever ask for, and they give us the energy to out on the field and dominate.”

McClain had 18 carries for 182 yards and three touchdowns, including a 68-yarder in the fourth quarter. He has 13 consecutive games of 100 or more rushing yards and 41 career rushing touchdowns.

McClain is quick to deflect the attention and more than happy to credit his offensive line.

“They are very effective,” he said. “It starts up front. Center, guard, tackle — without them, I wouldn’t be doing anything I did tonight.”

Fairfield coach Jason Krause has been asked about McClain several times over the past two seasons, and Friday night was yet another opportunity to explain why McClain is one of the state’s top players.

“He fits through some pretty tiny cracks,” Krause said. “He fits sideways sometimes. He can twist his upper half and his lower half keeps rolling. I think his speed showed tonight and his durability.”

Fairfield (5-0, 3-0 GMC) improved to 5-0 for the first time since the 2013 season. The Indians’ defense was also very stout and just allowed a touchdown pass in the first quarter.

“I really feel like we were well prepared defensively,” Krause said. “They threw a lot of formations at us. We didn’t try to defend every formation. We tried to stop their best stuff, and I think it showed tonight that we played a little bit faster and didn’t do a whole lot of thinking. Just let our kids play and have fun.”

Fairfield took advantage of a Lakota West fumble early in the first quarter. The Indians struck first when McClain scored on a 10-yard touchdown run to help put the Indians ahead 7-0 with 7:48 left in the quarter.

The Firebirds responded on their next possession. Freshman quarterback Mitchell Bolden carried the ball effectively within the first few plays. Then, on 3rd and 10, Bolden felt the blitz but found senior running back David Afari (Miami University commit) in the end zone for a 22-yard touchdown pass connection to help tie the game at the 5:34 mark.

Fairfield went ahead 20-7 when McClain sprinted 48 yards into the end zone for his second touchdown run of the night with 9:24 left in the third quarter.

Ellis found junior Jayden Mayes for a 23-yard touchdown pass connection on 4th and 20, sending Farfield to 27-7 early in the fourth quarter.

Fairfield went ahead 33-7 with 9:04 left when McClain scored on a 68-yard touchdown run — his third rushing touchdown of the night.

Lakota West had just 14 rushing yards for the game.

Firebirds coach Tom Bolden said the players were disappointed as a coaching staff and as a team with the overall outcome.

“We played hard in the first half but there were just too many mental mistakes,” Bolden said. “Too many bad snaps. Too many missed assignments — things like that. We just weren’t very good upfront offensively, and a lot of that had to do with Fairfield just whooping us upfront. But we’re better than that. It shouldn’t have been that bad of a whooping from their defense.”