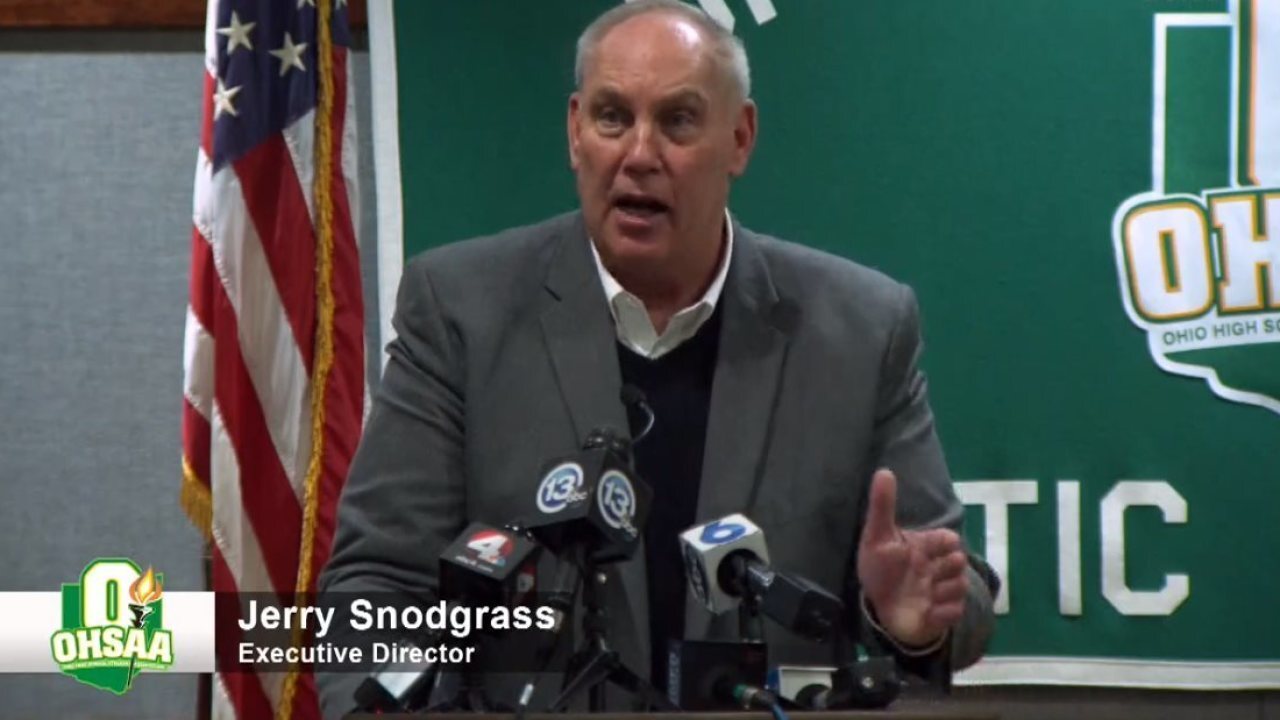 ICRC/OHSAA
Jerry Snodgrass had served as the OHSAA executive director since July 2018.

His departure from the OHSAA Monday was not voluntary.

“The Board of Directors felt it necessary to go in a different direction with OHSAA leadership," the OHSAA said in a statement. "We cannot go into more detail at this time.”

The OHSAA announced Monday night that senior director of operations Bob Goldring has been named the interim executive director.

"While leading the administrative functions until a permanent executive director is selected, Goldring will also work closely with state government leaders and school district administrators in developing a plan for return to play in the fall," the OHSAA said in a statement.

The OHSAA will conduct a nationwide search beginning immediately to fill the executive director vacancy.

"I am honored by the confidence the Board has placed in me," Goldring said. "We have a solid team of knowledgeable and dedicated professionals at the OHSAA who are committed to serving our member schools. My top priorities are to prepare for return to play this fall and successfully lead the team until a permanent executive director is hired.”

Snodgrass leaves after 12 total years with the OHSAA following a 31-year career in education as a teacher, coach and administrator.

The change in leadership at the OHSAA office in Columbus arrives at an important juncture this summer as the state continues to reopen during the COVID-19 pandemic.

Aug. 1 is the official start date of fall sports practice.

“Through a collaborative effort, we look forward to Bob guiding us and, more importantly, the OHSAA providing guidance to our member schools on the anticipated re-start of interscholastic athletics this fall,” said OHSAA board of directors president Dan Leffingwell, who is superintendent of the Noble Local Schools in Sarahsville.

“He brings a solid understanding of the association’s responsibilities to serve member schools and administer sports. Bob is a proven relationship-builder who will reliably serve our member schools until the position is filled permanently."

High school contact sports teams are still waiting word from Ohio Gov. Mike DeWine's office on when they will be permitted to travel between geographically different areas for scrimmages against other school teams.

Snodgrass, the executive director since July 2018, sent a memo to member schools Sunday afternoon that said the governor's office soon would allow residential team camps. He answered three follow-up tweets on Monday regarding the latest development.

Snodgrass led the OHSAA through a turbulent period the past few months during the pandemic. The OHSAA decided to postpone the remaining winter sports tournaments March 12. They were later canceled.

The OHSAA also canceled the entire spring sports season due to DeWine's decision to close schools for the remainder of the school year.

Snodgrass remained optimistic the fall sports season including football would be played starting in August.

The OHSAA has been working on multiple scenarios for the football season.

Snodgrass responded to a tweet June 28 saying fall sports were scheduled to move forward as of this past weekend but acknowledged the "uncertainty and unknowns of the future."

Goldring, the OHSAA's senior director of operations since August 2008, has been with the education-based athletics governing body since 1995. He served as an assistant commissioner from June 2005 to August 2008.

Prior to that, he was the director of information services from October 1995 to June 2005.

During the 2015-16 school year, Goldring was also the OHSAA acting executive director from mid-March to mid-June of 2016 when former commissioner Dr. Dan Ross was on medical leave.

Prior to becoming the executive director, Snodgrass, an upper Sandusky native, was the lead liaison to athletic administrators. He also oversaw the team that administrates boys and girls golf and many of the team sports for the OHSAA, including basketball, baseball, ice hockey, soccer and softball, according to the OHSAA website.

Snodgrass succeeded Ross as the OHSAA commissioner/executive director. Ross had been in that role since 2004.

Snodgrass was the association’s first administrator for boys and girls lacrosse when it became sanctioned by the OHSAA in 2017.

He has been a featured speaker at several student leadership conferences, where he has addressed sportsmanship, ethics and leadership.

"With over 800 schools in Ohio, it's just a massive lift to try to get those schools back when resources are scarce," Niehoff told WCPO in June.

"And when his staffing has reduced a little bit, I believe, it's going to be hard for his office to do everything and get it all done in the way that he used to. He's a great guy, positive attitude – he's plugging away and doing good things for kids in other areas as well."

Before joining the OHSAA, Snodgrass had a 31-year career in education as a teacher, coach and administrator.

The OHSAA had 816 member high schools and approximately 760 seventh- to eighth-grade schools in the association in the 2019-20 school year. The OHSAA represents over 350,000 students competing in 26 sanctioned sports – 13 for boys and 13 for girls.